"Free vs Fee – the Future of News": Notes and take-away quotes - Part 1

A couple of weeks back I went to an SLA Europe meeting entitled "Free vs Fee – the Future of News" with a panel featuring Jeremy Lawson from Dow Jones, Andrew Hughes of the NLA, Acquire Media's Laurence C. Rafsky and new media legal eagle Laurence Kaye. 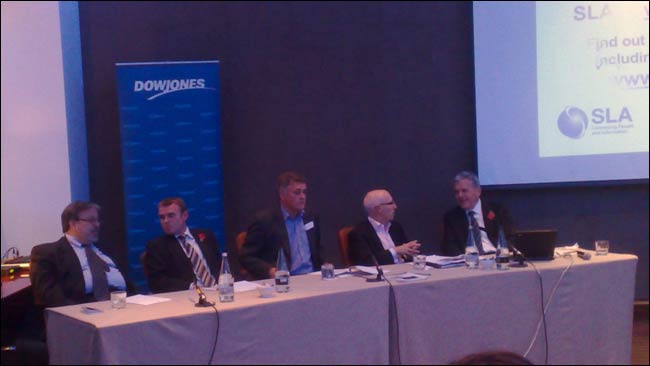 The centre-piece of the discussion for me revolved around an entertaining story told by Laurence Rafsky.

He spoke about a fictional young lad who had set up his own little enterprise. Every day he fetched the newspaper from the newsagent, and carefully folded it up so the sports section was at the front to save his tired dad the hassle. In return, his dad gave him 50p, 10p above the cover price of the paper, and the lad got to keep the 10p.

Some time later, the paper in question decided to go free, but his dad kept paying him 10p for the folding and the carrying. Suddenly, the newspaper sent the little boy a royalty bill of 5p for every newspaper he's been picking up for free, because they'd changed their terms and conditions to outlaw secondary distribution and 'folding without a licence'.

Now Laurence is a very entertaining speaker, and there was much nodding around the room - how could those mean newspapers pick on that poor little boy who was just trying to earn some pocket money?

However, on closer inspection his very analogue analogy breaks down, because it is still grounded in the physical world of the newspaper. There is a limit to the number of papers that one boy can fold and redeliver.

Andrew Hughes for the NLA made the point that in the digital realm, the newspaper industry isn't asking for royalties from a wide range of individuals, it is specifically aiming at aggregators who have built entire businesses on scraping the content from multiple sources, with the potential to infinitely reproduce that content.

It is very easy to criticise the news industry for not acting quickly enough to innovate their business models in the face of the Internet onslaught - and any long term readers of this blog will know that I frequently have. However, the electronic syndication of content to aggregators is an area where newspapers have a long established track record. It is nearly a decade since the NewsML exchange protocol was established, and the IPTC has been active in this field since the 1970s.

The web is made from links, and it would be absurd to try and prevent people linking to your content. However, I still remain unconvinced that 'fair use', 'copyright exemptions' or an argument that 'we are just forwarding links' justifies charging users for paid subscriptions to content you are neither producing or paying for, when other established services like Factiva and Lexis-Nexis have to pay for that content, and have been doing so for years.

Where I thought Laurence Rafsky was on surer footing at the SLA Europe event was when he talked about the difficulty newspapers have in making an artificial divide between B2B and B2C consumers directly accessing content. Illustrated with a great image of a web robot or 'proxy', he argued that when people can use Google from their office desktop, newspapers could not justify pricing the same content, delivered in the same way, differently for 'home personal use' and 'business use'.

Next week I'll have some more of my notes from the event covering the future of print, how your own legal terms and conditions can work against you, and the fractured state of the industry's ideas on how to make money (or how to at least lose less, as I sometimes like to look at it).

Actually internet media or I should better call it social media take average users attention on Iran election and later several people argued that social media is fast and better than print media.

However, I still have much doubt on it. Those people who even don't know what is browser, who use twitter to talk about shit can take social media as news aggregator as much as a professional internet user do.

So, to me print media will not lose its existence in general public but they definitely going to lose those internet depended readers. For example: I love to read news online where most of my family members love to read from print media.

I totally agree with you! It really makes me mad when people do that. I do think it is ok to take that content and make it available for free as a draw for traffic, but then whatever you are doing that is unique you can charge for. That is what I do. I use articles that are associated to my content or industry to add to what I already have, it's good for my readers. But I would never charge for something which isn't mine and can be found elsewhere for free.

Print media has the upper hand, as more experienced knowledgeable persons are attached to it than online social media.