Tweeting a link or a picture? Don't forget to blog it as well...

Over the last few weeks I've had three tweets receive a lot of retweeting action. I thought it worth sharing what I'd learned from it about the relative values of tweeting a link, and blogging about something.

On the afternoon of the Arsenal - Celtic Champions League match at the Emirates, some Celtic fans posted unofficial notices around Kings Cross Underground Station. I thought they were pretty funny, snapped a picture on my phone, and uploaded it to Twitpic and Twitter. 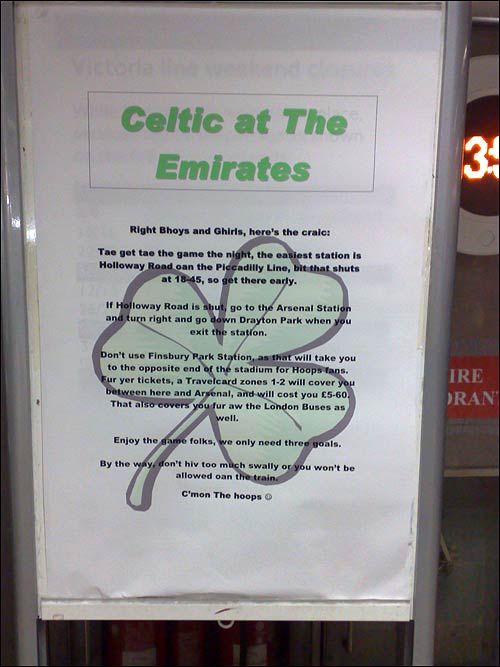 A bit later on I realised that unless you'd been looking at Twitter around about that time, you would have missed it and all the re-tweets, so I also made a small blog post about it here.

In one sense I wasn't sure it was worth bothering with, since the post didn't amount to much more than 'look at this photo', which is exactly what I had already published on Twitter. However what has been interesting to see is that the blog post had an entirely different audience to the tweet. Whereas the tweet was passed around by my friends, contacts and peers, most of the traffic to the blog post has come from football fan forums. I wouldn't have reached these people with the photo if I had relied on Twitpic alone.

When I spotted that the English Defence League's forum had a massive picture advert for a Muslim dating site I nearly fell off my chair laughing. I immediately tweeted a link to it.

This was, in hindsight, a mistake.

As the link got passed around Twitter, all the traffic went directly to the EDL site without anything to set the context, and I had no way of guaranteeing that the same advert would appear. It also meant that I missed the opportunity to send that traffic to currybetdotnet and maybe entice new people to subscribe to the mailing list or RSS feed here. I did belatedly blog about it, but by then the opportunity to exploit the interest in the screenshot had passed. 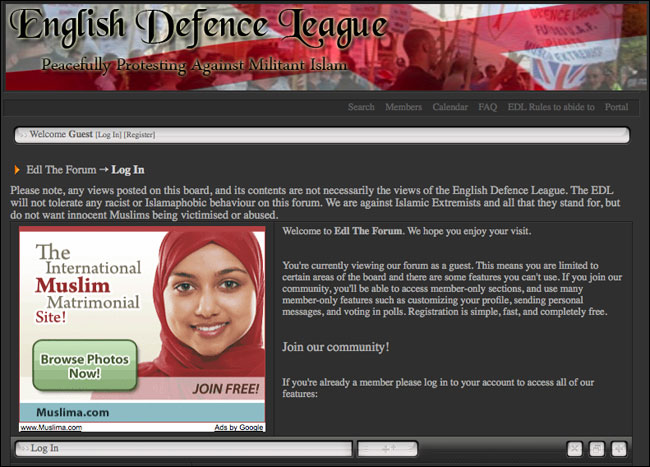 Labour, The Sun and Google

Having learned from the experience of the EDL tweet, when I spotted that Labour supporters and The Sun appeared to be engaged in a tit-for-tat Google AdWords war, I very quickly blogged about it. All I needed was two sentences to explain what was going on, and the screenshot. I could have just tweeted a link to the relevant Google SERPS, or uploaded the screenshot to Twitpic, but instead I made sure that it was a link to currybetdotnet that was being spread around.

This proved to be problematic in a different way, when it transpired that the Labour supporting advert hadn't come from official sources as I had initially assumed. The story was picked up by Matthew Moore at The Telegraph, and he was able to get a quote from the Labour party denying their involvement. I corrected and updated my blog post, but there was no way of issuing a correction to all the people who had read the original tweets and re-tweets.

One other thing occurred to me about this - as a blogger I just spotted the ads and called it as I, and I'm sure countless others, saw it. The Telegraph had official channels to chase. I'd wager that however much you champion the rise of the citizen journalist to break stories or spot issues like this, there was no way I would ever have been able to get hold of a Labour Party official at short notice in the middle of their conference. Maybe the scarcity that newspapers need to make their business models work in the future isn't scarcity of distribution or scarcity of news production, but the scarcity of rapid cast-iron verification.

I give you a lot of credit for pointing out the error and discussing it. Frankly, not enough people stand up to say that they made a mistake.

Thank you. Your actions prove that all bloggers are not just out to stir pot, create controversy and put themselves in a position of prominence.

That's the beauty and devil of twitter if you post something and it goes viral whether true or not you often have no recourse for your actions.

I am new to blogging and I have a few question about your posting guidelines, I was wondering,,, If there is a link for the website address in the url box, then what would be the purpose of using html tags in the comments section? I thought the name for the link was sufficient as long as it was a keyword? Please let me know?

That is classic. The English defence league with a Muslim matrimonial site on it. LOL

Definitely agree with the twitter and blog. I tend to blog first on posterous then the twitter etc updates go out automatic after that,

however had labour been social media monitoring properly there would be no need for you to contact them, they would have got in touch with you.

well, at least if it goes viral through twitter it won't last long :-)