A couple of days ago Peter Moore wrote an interesting post about politics and paid search, pointing out how Channel 4 had used Google AdWords to catch some of the search traffic generated by the BNP appearance on BBC's Question Time.

He pointed out that:

"Paid search has the potential to make an enormous difference [in an election]...It’s possible to carefully study and collect keywords, to manage and monitor huge campaigns that include short and long tail terms as well as other misspellings and oddities. With such campaigns set up, the parties could increase the number of visitors that come to their websites (the centre of any digital hub) and they could also reinforce their message on the search results – over and over and over again. The question is this: do any of the major parties have the ability to do this in time?"

The Conservative party did experiment with AdWords during this year's budget. It was the most dynamic use I've seen of the medium by a British political party. It didn't entirely work for me, however. If you were running an ecommerce pay-per-click campaign, you'd make sure the traffic ended up on a carefully crafted landing page tailored to the exact phrase.

The Conservatives were not able to do this.

Although in real-time they were booking ads that targeted the phrases used by the Chancellor, the ads only linked through to a generic statement written before Alistair Darling stood up. 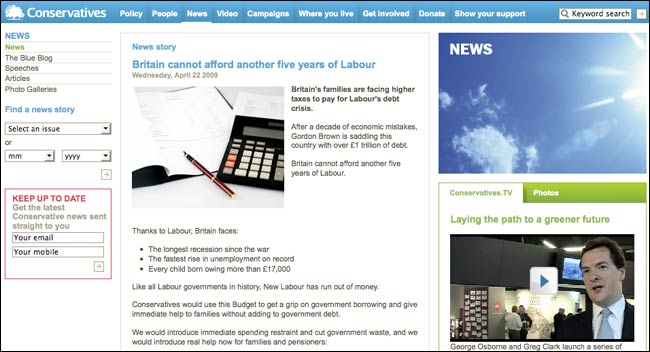 If I've searched for 'pension tax relief' and clicked an advert from the Conservatives that says 'pension tax relief', I really expect a response to what Labour have announced, not just a passing reference to the topic in a news piece that could have, frankly, been written weeks before.

Of course, during the Budget, the only people able to approve an opposition statement about tax are forced to sit in the House literally opposite the Chancellor, virtually incommunicado. That won't be the case during an election campaign, and so I'd expect to see a more sophisticated approach.

The risk is also there for political AdWords campaigns to backfire.

On the day that The Sun newspaper renounced the Labour party, a supporter booked an ill-advised advert mentioning Hillsborough. There was nothing on the Google page to indicate that this wasn't an official advert from the party, and there was widespread disquiet about the choice of subject matter. The potential for using AdWords for mischief during an election campaign is obvious to see.

Who knows, maybe this next election campaign will wake the parties up to how reputations can be damaged online via AdWords, and we'll end up with the new Government exerting pressure on the ECJ to change their minds over Google ads appearing for trademark searches.

There were earlier examples of this long before The Sun dumped Labour where they were getting personal about Cameron...

A search on David Cameron back in June brought up an adwords ad along the lines of the truly offensive side of of David Cameron and the Labour party link.

I saved a screenshot at the time and have posted it up here for viewing..

It is a wonder why it has not be used more. It is a great way to target exactly what people are looking for. We will start seeing more online advertising in the near future. Just looking back how Obama has dominated the SERPs this past year.