Last week The Guardian and The Observer published a series of reproduction comics from the 1970s and 1980s, including facsimiles of Jackie, The Dandy and Roy Of The Rovers. As well as giving me a blast of nostalgia they also gave me a chance to look through to see the contrasts that modern media and telecoms have brought to change the relationship between publisher and reader over the last 40-or-so years. 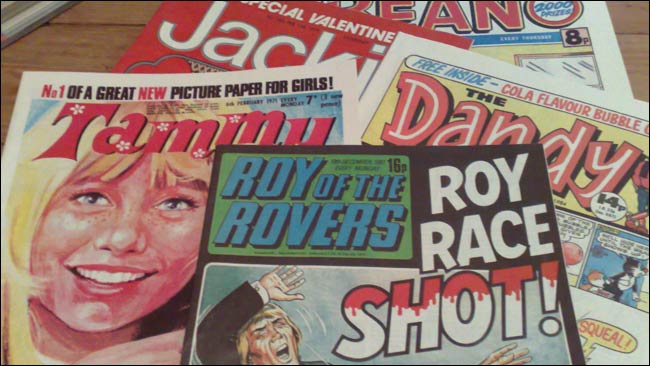 "Reader's Clubs" have been mooted as one potential source of revenue to fund the future of journalism. I suspect they'll have to offer a little bit more than a furry badge with moving eyes and some 'club secrets', as the Dennis The Menace and Gnasher Fang Club did in the early eighties. 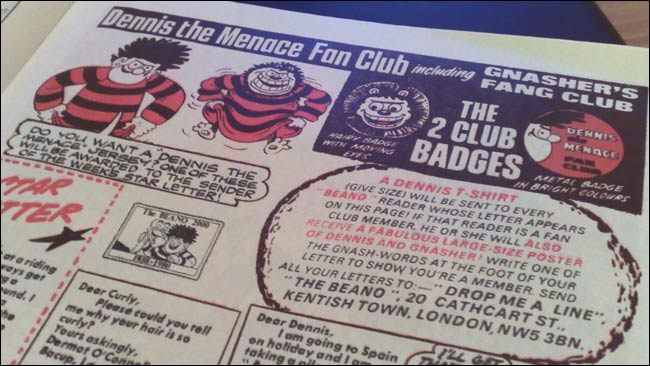 In 2009 the sign-up process for a 'club' would probably be a bit more involved than sending off a postal order. 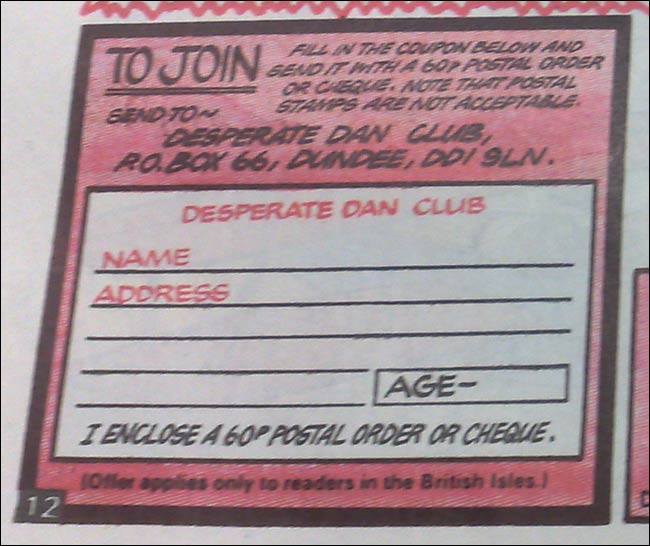 And I'm not sure that anyone would be able to raise revenue with a club branding that cast aspersions on their reader's diet like Desperate Dan's "Pie-eaters Club" did. 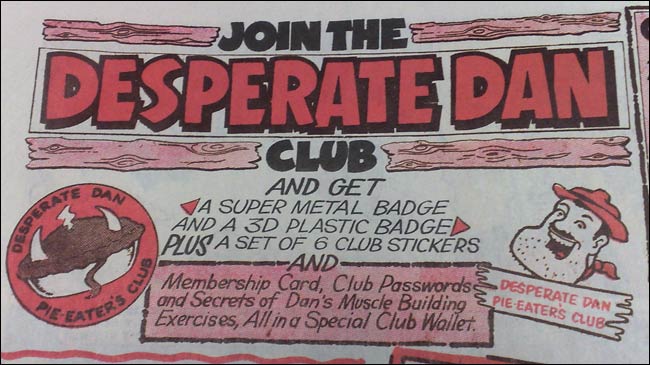 Mind you, I think the world would be a much better place if there were more competitions to win 'Amazing Robots that obey your voice'. How rubbish must they have been in 1984, when the 48k ZX Spectrum was still at the cutting edge of home computing? 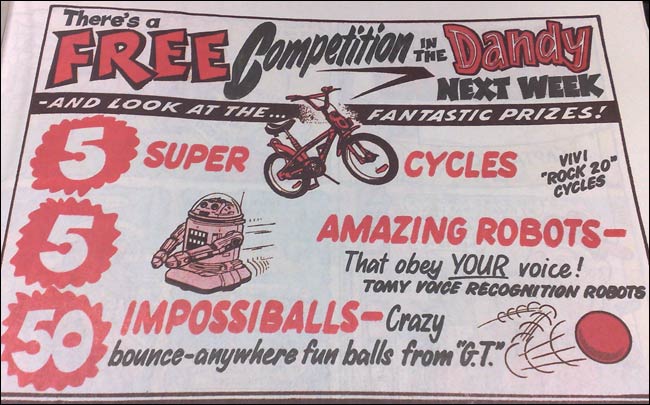 Jackie was actually more interactive than most of the comics reproduced for The Guardian. There was not only a letters page, but a beauty tips section with reader's questions, and a problem page.

An army recruitment advert caught my eye. Nowadays we are used to seeing the MOD campaigns which invite the audience to 'search for RAF Reserves', and so on, using pay-per-click search engine campaigns to attract recruits. In 1975, if you wanted to find out more about 'life in the New Army', you needed to write a letter to the WRAC Careers P.O. Box.

And it appears that women could apply for all of 20 different job roles, which included cooking, being a secretary, and manning the phones. The advert doesn't specify whether there were roles for cleaners as well. 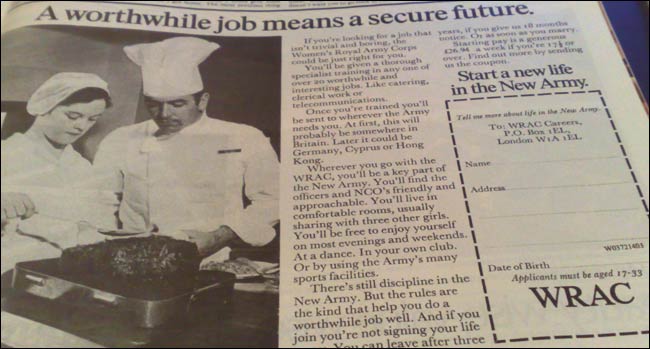 Another thing struck me about modern media consumption in the Jackie magazine. At the front there was 'Weekspots', a suggested timetable of events. Wednesday included not just cleaning your room, but 'cleaning your records'. I wonder what the modern equivalent would be - tidy up the metadata on your mp3s and finish downloading the iTunes artwork? 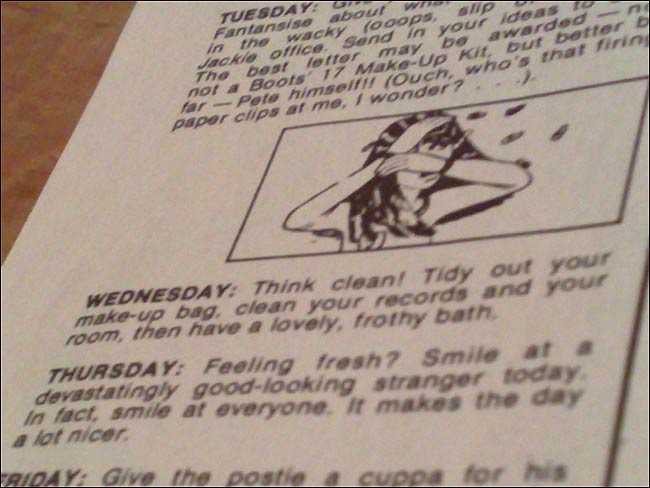 Curiously, the 1972 Bunty Summer Special had absolutely no 'user generated content' whatsoever. This is probably because it was a one-off 'summer special'. 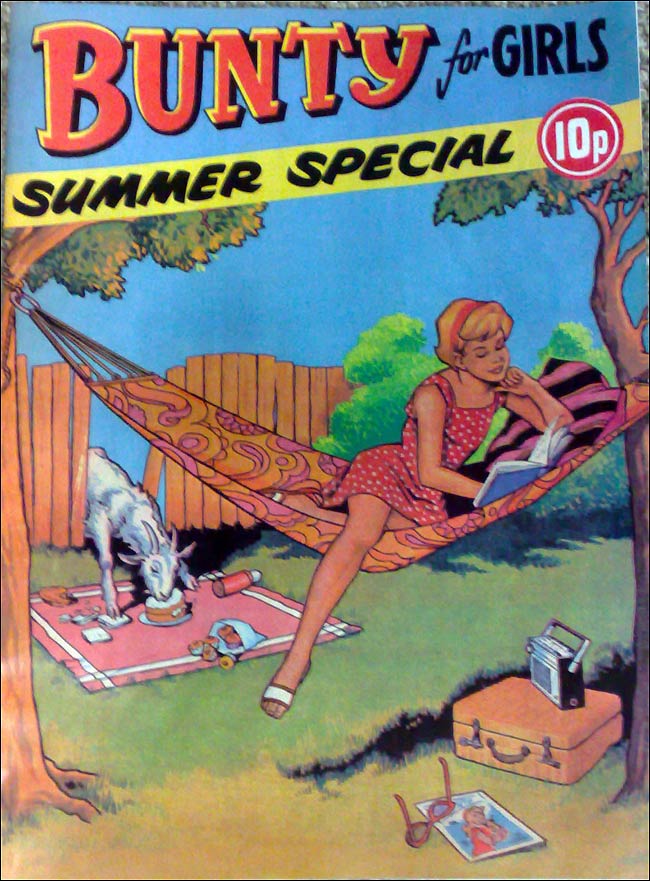 This type of issue had a slightly higher page count and a longer shelf-life than a regular issue. When I was young, we used to go on what is now called a 'staycation', but which in the 1970s I simply knew as a 'summer holiday'. I would usually be allowed to be a couple of 'summer special' editions of comics - not Bunty I hasten to add - to keep me occupied when it inevitably rained.

The 1971 issue of Tammy that came with The Guardian on Thursday was also lacking any content submitted by readers, but this was due to it being the first issue, with an appeal for girls to start writing in. 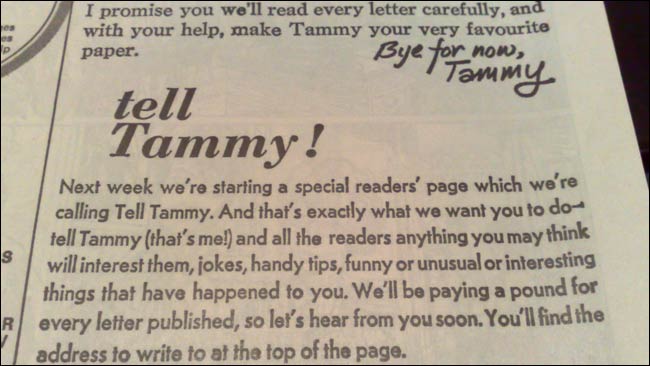 Given that the only way to contact the magazine was by snail mail, not email or SMS, I can't help wonder how much of the user-generated content in issue 2 would actually have been genuine. In a world without computer assisted desktop publishing, the turnaround time on getting letters posted in by girls, edited, and then typeset would have been pretty tight.

I got very over-excited last week to see the issue of Roy Of The Rovers that would have originally been published when I was 10. Tomorrow I'll be looking at some of the ways that issue illustrates technology and the changing media in the intervening years.

What a fun blog and really fun to see the old cartoons. It is amazing how many changes have happened and it hasn't been that long ago. Cute and engaging story.

A couple of years ago, one of the old comics started a new mobile subscription service. It seemed a flawed idea at the time - 9 year old boys don't have posh enough mobiles (or enough credit) to read comics on them, and 40 year old men aren't going to experience the same nostalgia through a mobile... I haven't heard anything about it since - any idea if it was successful?

Wow. I need to grab my comic box out of the attic and dust them off :)