"Bang Bang" - What B.A. Robertson can teach the news industry about the price of scarcity

With varying announcements about potential future paid-for-content models from the FT and News International titles, there has been a resurgence in the debate about getting people to pay for visiting newspaper websites.

Malcolm Coles yesterday wrote a great blog post looking at ways that News International could succeed in monetising their content. I think it addresses a lot of issues and niche content that does exist, that the naysayers of the 'information wants to be free' crowd tend to sweep under the carpet as it doesn't fit with their argument.

However, today I wanted to look specifically at the issue of 'scarcity'.

Now, to me, this does not appear to be an image of scarcity. 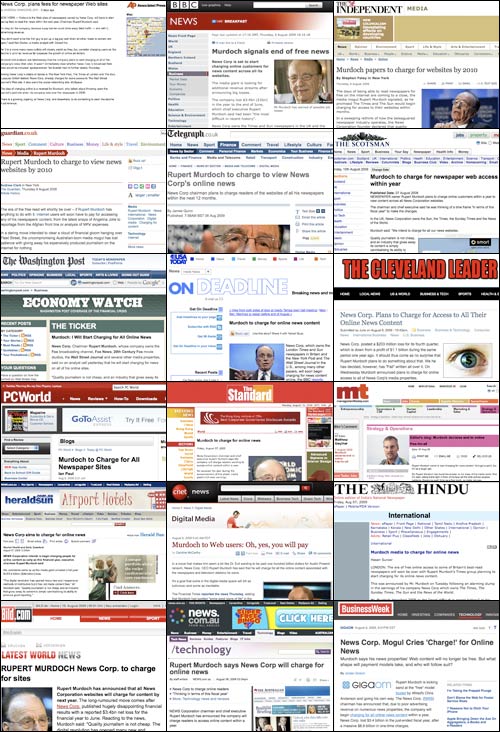 We don't compete in a narrow vertical anymore.

We used to only have to out-sell the newspapers printed in the same country, displayed all together on the same shelf.

In this image, newspapers from the UK, US, Australia, Germany, Hong Kong and India are all covering the same story.

And online we are also competing with the B2B magazines that used to be a couple of shelves away, more out-of-date, and much more expensive than newspapers. Online they are free and just as fast to report news in their sector.

We often hear that the news industry is in a similar position to the music industry - an iTunes for news and all that - so I thought I'd take an example of real scarcity in the marketplace from there. 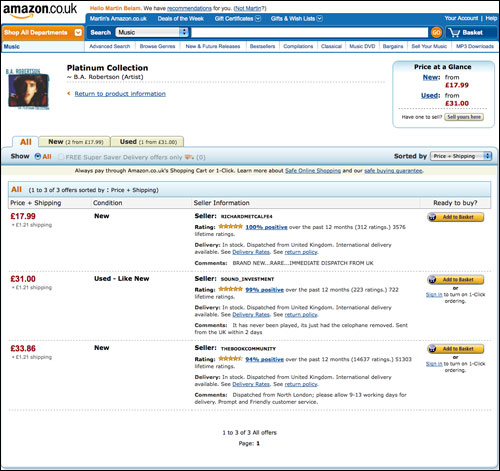 You saw that screengrab right.

On Amazon right now you can pay up to as much as £33 for a CD of hits by B.A. Robertson - a sometimes critically acclaimed but reasonably obscure Scottish singer/songwriter, who had a couple of big hits in the UK in the 1970s.

Why the high price?

Well, his material is physically hard to get hold of. This CD was released as a 'Platinum Collection' CD. The rights to the recordings were probably parceled off en masse to a third party by a label trying to get something from back catalogue material that they couldn't see great commercial value in re-releasing themselves. That means the CD would have been produced on a low budget, retailed cheaply, pressed in low numbers and not widely stocked. And there are, as far as I can tell, no legal digital downloads of his tracks on the major sites.

But there is another factor at play in pushing up the price of music by B. A. Robertson.

It is also hard to get for free.

The kind of people likely to be interested in slightly obscure seventies Scottish singer-songwriters tend not to be the kind of people packaging up torrent downloads. A couple of the hits appear now and again on big zipped up torrents of 'Hits of the 70s', but otherwise you can't buy B.A. Robertson's back catalogue on iTunes, you can't download it for free via The Pirate Bay, and searching for a record shop with that CD physically in stock would test the patience of Job.

So, when we think about asking the market to pay for newspaper content online, I think we have to look honestly at that content, and ask, what have we got that is unique and desired by consumers?

Read more of my articles about the future of news

Read other recent posts about: Media, Newspapers, The Sun, The Times, Web

I take your point. However, Which.co.uk which has a proven business model in this area and 216,000 subscribers to back it up, has found a way to operate in a market where scarcity does not exist. Product reviews are a dime a dozen online.

The Which? difference is based on quality and trust. Admittedly, there aren't many newspaper brands that enjoy the same level of trust. However, Murdoch's argument is based on the same thing, that people will pay for quality from a source they can trust. Time will tell.

Martin, your analogy with B A Robertson's rare CD is very apt. I'm personally amazed that anyone still buys newspapers, We long ago concluded that between TV, Radio and Internet we can get all the news we need. We haven't bought a daily newspaper for over a decade. Whenever I do see a newspaper I find that what it contains is either old news, dross or opinion which I really don't need to see and wouldn't pay for. Newspapers are of course now much more like magazines, but why should Uncle Rupert think that belatedly changing the on-line newspaper financial model will wash with people like me?

Dead-tree newspaper buying declines about 4-5% per year I think? That's somewhat in step with generation change. I believe most newspapers are bought by older people?

While free news sites continue to publish (and how could they not?), and news is not rare or hard to get, I am certainly not going to pay for online news/magazine content. I'm incredulous that anyone would think I might.

I'm off now to continue my quest for that B. A. Robertson CD!

Those are excellent points, and I’ve often considered why other people aren’t talking about this more. One of my favorite newspapers recently moved their website to a pay for it model. However, outside of several beat reports that I enjoy, the bulk of the content are Associated Press reports or the regurgitation of Associated Press reports. The pay model as many companies have it presently constructed is doomed. There is far too much overlap in the news outlets for it to be profitable long-term. Can a news outlet stand out from the crowd, and be profitable doing it? It remains to be seen.