Last week the Sense Loft in Soho played host to the second 'London IA Mini Conference'. Timed to coincide with the UX London event, the evening featured 5 speakers on a range of information architecture and user experience topics. This is the first part of my notes, facts, and take-away quotes from the evening.

"I could talk forever about this project" - Leisa Reichelt 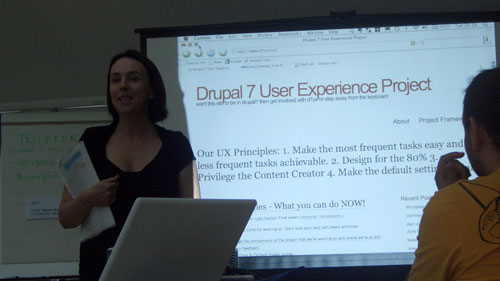 Leisa Reichelt was explaining her work on the Drupal 7 UX project. This has not been without problems, not least of which is that if you live in the land of IRC like most developers, your experience of designers, usability and UX people is them repeatedly telling you off for "doing it wrong". She estimates that 80% of their time on the project is community management, and 20% is actual design effort.

They steered clear of personas for a long time, judging the community to be far too sceptical of them, but they do now have two pencil sketch characters. One is a content uploader for a website who has no concept of how the system works, they just need to use it for their job. The other is a web savvy individual who just wants Drupal to work without having to get involved in the nitty-gritty. Of course, these are very different personalities from the passionate developer base working on Drupal. Their user interface to the system is the command line, the packages and the code.

One tactic the UX team have used is to make short videos. They believe that this has put human faces on the process and cut down (a little) on some of the mean comments that can be made online. They've also done crowd-sourced user testing. They've got people to make their own little video clips of users working with the system. This has been great because it serves to firstly validate the input, and secondly, it gives developers who want to dabble a bit in IA, usability or UX the opportunity to do so in a way that contributes to their project.

Despite the obvious complexity of the project, Leisa's enthusiasm for the community and passion to deliver a good result stood out. It was a really interesting talk from Leisa, and I think collectively the audience felt a lot of her pain. On a personal note, after her epic tweeting from #uxlondon, I was astonished she had the stamina to still present at the end of the day!

"This site feels like searching a database, when it should be about choosing a holiday" - David Jarvis 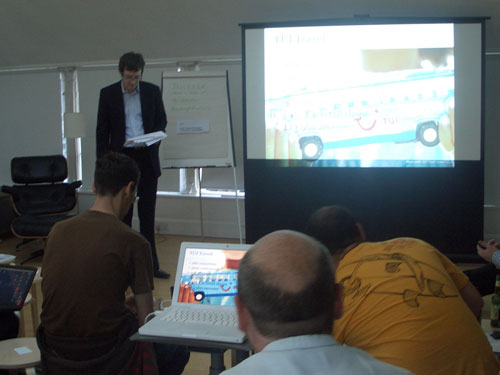 David Jarvis was talking about conversion tips for travel sites, and he had five to share. As he said himself, they are all relatively common sense, yet many of the established travel sites fail to apply them. David did also concede that half of the trick with good UX was 'common sense in hindsight'.

Central to his argument was that a holiday was a large ticket item, and unlikely to be an impulse buy. The user was very likely to research price and availability on several sites, and be in discussions with several friends and family before they reached their purchasing choice.

However, many online travel stores are optimised for the first time visit. Details you type into complex forms, for example, are often only partially recalled, if at all. David pointed out that whilst some conversions do take place on the first visit, revenue from the long tail of repeat visitors adds up to 5 times as much income.

David cited an online survey conducted on one travel site with 22,000 respondents to a survey. Nearly everybody, whichever way you sliced the data, were window shopping to find out "how much stuff costs".

Karen Loasby's IA blog is called "IA Play" because 'bored people make bad decisions'. She would have been delighted that David's fourth point was to "Support FUN!". Buying a holiday shouldn't be about searching a database. David finished with another great quote from a user, which should be a salutary lesson for all of us in experience design for e-commerce applications:

"People were making great working models, and I was accidentally sticking myself to tables" - Jason Mesut

His talk was described by Cenydd Bowles as "the most bat-shit insane presentation I've ever seen".

It also involved plotting A-list tech celebrities like Steve Jobs and Jakob Neilsen on an axis that seemed to go from House MD on one end, to R2D2 on another. A classic, and the second London IA Mini in a row to have a slide featuring Darth Vader. 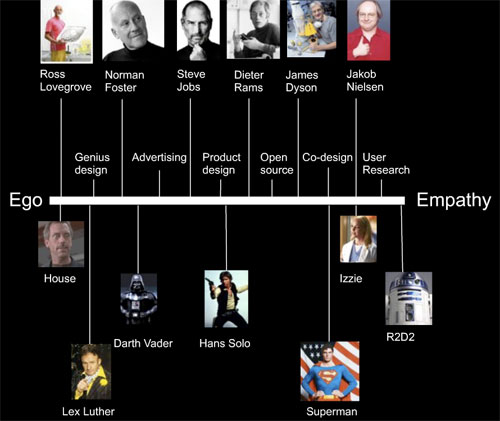 (As an aside, when I tweeted this during the evening, the real Darth vader auto-followed my @currybet_live account on Twitter. Typical spammy behaviour that you'd expect from a Dark Lord of The Sith).

In between swearing, Jason was trying to get across that it was all very well being wishy-washy and claiming empathy for our users, but that no amount of focus groups or usability testing or looking at competitor products would have produced the Dyson vacuum cleaner. James Dyson had to have the balls to JFDI. Vision, pride, persistence, pi$$ing people off, and having confidence are important values for a designer.

Jason found himself torn between evangelising a user-centred approach in all his work, and just wanting to do what he thought was the right thing because he trusted his hunches and gut feelings. He described the presentation as his act of public group therapy. Jason was very entertaining and sent us off for a networking and beer break all dreaming of tearing up the user-experience rule-book and replacing it with our own benign design dictatorships.

You can find Jason's slides here: "Ego vs. Empathy - the challenges of a UX designer".

Tomorrow I'll have some more of my notes, facts, and take-away quotes from the second London IA Mini Conference.

I was just idly wondering how much of this article would be comprehensible if sent back in time, say, twenty years. Funny old world, innit?

I'm not entirely sure it is that comprehensible now!