Is peer-to-peer streaming of international football showing the game a new revenue model?

When I lived in Greece it was sometimes a bit hit and miss whether I got to see England games. The time difference meant they were on late in the evening, and often there were competing fixtures of more local interest, or featuring Denmark, Sweden or Norway, from where a great deal of tourists to Chania originated. It meant that during England's doomed attempt to qualify for Euro2008 I got used to the UEFA live match centre, and relied a lot on minute-by-minute coverage from The Guardian and the BBC.

I had a flashback to that situation after England had defeated Kazakhstan last weekend. England's two key rivals in Group 6 were playing each other in Zagreb, and so I was using the FIFA World Cup Matchcast centre to track the progress of that match. 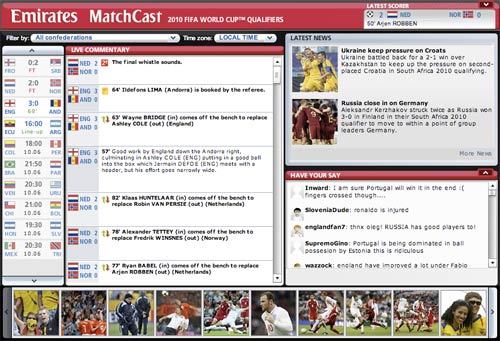 This provides users with a scoreboard of what is going on, and text commentary of significant moments from World Cup Qualifying matches across the globe. There is also a small chat room for football fans to hurl insults at each other.

However, it is already looking like a dated format.

With 20 minutes to go in Zagreb I hopped over to justin.tv, and found someone re-broadcasting coverage of Croatia-Ukraine. OK, the commentary wasn't in English, and the quality wasn't great, but it was enough to watch the conclusion, during which Croatia hit the post twice, leaving the score at 2:2 - a very pleasing result from an English point of view.

This screenshot, taken during England's game with Andorra on Wednesday, shows how now on international nights, rather than relying on the official FIFA text commentary, I could have had my pick of games from around the world on P2P live-casting. 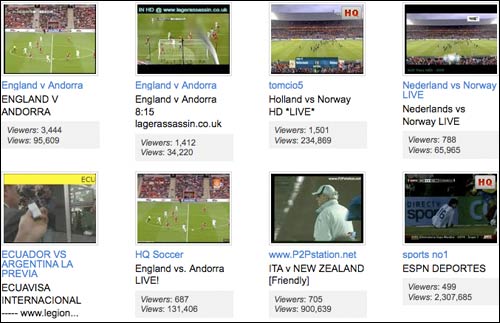 If the Croatian FA had offered me direct, for a couple of Euro, the chance to tune into the last 15 minutes of that game online, in better quality than I could get from justin.tv, I'd have almost certainly paid it.

While they don't seem to have covered the Croatia game you mentioned, Omnisport allow you to legally watch a raft of WCQ games and other sports too.

I'd say it is definitely the future. I am more of a rugby fan than a football one (hence the name) and I know within our sport a LOT of people use Justin TV to watch games as they don't have access to Sky Sports.

People are far more willing to pay a couple of quid for big, one off games, or a subscription for their TEAM (not sport) than they are to pay more for generic coverage.

If that comes as peer to peer, or clubs reatining their own rights and streaming online etc, is up for debate. But there is certainly a business model available to tap into I think

You raised a very good question there. Like you said, everything is in place and it's just a matter of getting it going. Musicians and labels used to whine about losing money to free MP3 downloads, until Apple came around and reinvented the industry with iTunes. Record companies could be banking right now had they thought ahead and made the move instead of waiting on Apple. Yes, they make money right now but nowhere near the amount they would have made if they were the ones that set up a site similar to iTunes and directly sold music to fans. The same goes to football. What are they waiting on? ESPN 360 is starting to air football games online as long as they have rights to them. It's free and people are loving it. I think tinkering with this could create a new and affordable business model. They just have to go for it... it's all there for the taking.