The Apprentice and the unintended consequences of social media

On Wednesday night I was pointed to Scoopler, a real-time search engine, by Phil Bradley's blog. Since The Apprentice had just finished on BBC One, I thought that would make a good test case. 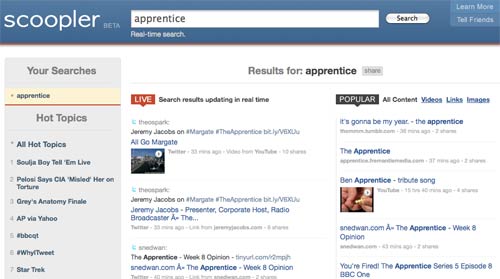 Sure enough, a search for The Apprentice turned up lots of tweets. It was an episode where the task was to re-brand the seaside resort of Margate, and one of the teams were attempting to make it appeal to the gay market. Some of their interactions with the local gay community were utterly cringe-inducing.

This was the talk of Twitter, and then someone mentioned in the programme that there had been a Gay Pride march through the town the previous year. Before long, a link to a Flickr set of some people getting ready for 2008's Thanet Pride was zipping around on Twitter. 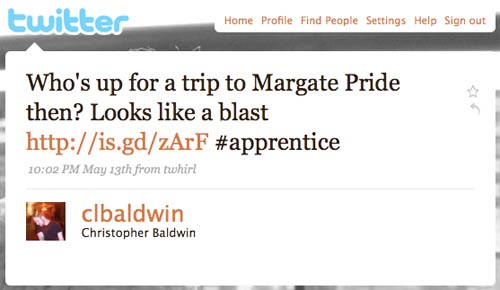 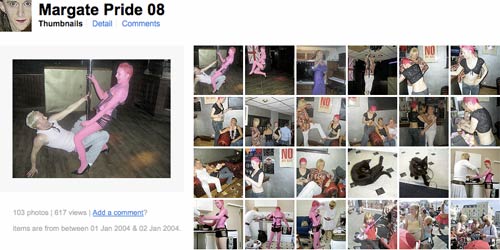 And there you had the unintended consequences of social media in a nutshell.

At the time this set of photos was posted on Flickr, although they were public, they were probably intended for a small group of friends. There was no hint that the following year, gay Margate would be the main focus of discussions on the fastest growing social communications tool of the moment.

I think they'll get a shock if they ever look at their Flickr stats page...

The programme was awful and did nothing for my home town which when I left it in the 70's was OK. The best bit was the man (I believe to be a councillor) who said sheepishly "we need to attract the masses back to Margate". Successive Thanet D.C. regimes have failed to attract anything since 1974.