It is probably longer ago than I think, but it doesn't seem that long in the grand scheme of things since the whole Kings Cross St Pancras Underground ticket office complex was revamped as part of the redevelopment of St Pancras into a Eurostar terminal. That also meant a whole new set of signage for the station.

Judging by this handwritten annotation, it seems that at least one member of staff thinks the wayfinding to the Metropolitan, Hammersmith & City and Circle lines isn't as helpful as it could be. 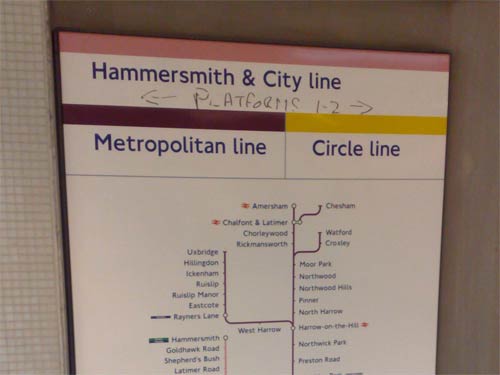 How depressing. There seems to be an obsession amongst station staff with customising signs/making new signs that are completely superfluous - it drives me up the wall.

Yeah they really messed it up because you are faced with deciding to take the left or right stairs but there is no guidance. The stairs simply end up at opposite ends of the platform but it's not obvious the first time you go there.