"Maps and legends" - The Macedonia naming dispute on currybetdotnet

Just after I left Greece last year I published a series of three posts exploring the issue of Greece's relationship with her northern neighbour, The Former Yugoslav Republic of Macedonia. The first was a fable set in the future, putting forward a vague parallel situation that might resonate with UK readers - "The Former Scottish Constituency of Northumbria". The second and third posts looked at maps - a Greek political map where FYROM was nameless, and a German school-children's map where Mazedonien was simply Mazedonien, no FYR about it. 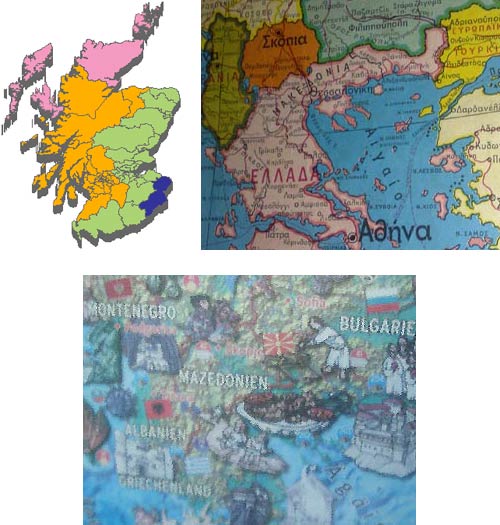 A link to the middle article - about the Greek map - was recently posted on the Maknews forum. This is a forum for, in their own words, 'ethnic Macedonians whose ancestry is from Aegean Macedonia'. It has sent quite a lot of traffic to the article, and generated a lot of comment, not all of which I've been able to publish.

Viewed through the prism of someone who has just been reading Maknews, and out of context of the series, it has attracted strong criticism from Greek nationalists. That is definitely one downside of my habit of splitting what could be long single posts into related series. Some of the comments I haven't been able to publish have either attacked me personally with gusto, or, in several cases, blamed, yes, you guessed it, the Jews and the Soviets of the Russian Revolution for the whole situation. As you do.

My purpose in writing the series of three posts was not to give an opinion one way or another on the dispute. In the same way that my Greek friends on Crete were often incredulous that my wife and I could seriously start having an England vs Scotland dispute when to them we were both obviously 'English', it is a dispute with a lot of local cultural nuance which I find hard to judge.

My chief verdict would be that it seems to me a shame that politicians on both sides of the border have talked up the dispute for short-term electoral gain, at the expense of long term national security and stability in the region. But then that's politicians for you, in every country!

Really I wanted to try and convey that the general feeling in the 'West' that the Balkans has now been 'sorted out' is a false one. I think the issue of NATO recognition for FYROM last year caused a blip on the radar, but little more than that. In British newspapers in the last year, Chipwrapper has indexed 607 results for 'Macedonia', 129 for 'FYR Macedonia' and just 26 for 'FYROM'.

I'm sure that most people outside of the region regard the intransigence of both sides over the naming issue with bafflement. The comments on my articles show that the depth of feeling in this issue is one that the rest of Europe should take much more notice and care of, especially as FYROM/Macedonia inevitably looks towards joining the EU.

7 billion people have the right to name themselves. How come that 2 million peaceful Macedonians can not?

“Something is rotten in the state of Denmark”

LOL, you know Martin I have no idea where I came across your RSS feed but every once and a wide something on Currybet stops me dead in my tracks and makes me ponder, this is no exception :)

7 billion people have the right to name themselves as long as the name is not already taken! The same stands for 2 million people wanting to be called "Macedonians"...Obviously having a name that refers to something else misinforms and causes confusion...

Well, Greeks are not Macedonians and they have no rigth on that name. Macedonians were people lived in territory today mostly in Macedonia (slavic part).
They have right to call themselves how they want.
Greek name for Macedonia exists from early 1990's and before that were other names for that part of Macedonia which is today in Greece.