The ghost of the London, Chatham and Dover Railway Bridge across the Thames

Earlier this year I was working with a client who had offices near Blackfriars Bridge, which gave me the chance to explore that bit of Central London. I'd actually passed by that way very closely when doing a ghost walk around Haunted Clerkenwell, St. Pauls and the Barbican, but during the daylight hours it was the ghost of a bridge that intrigued me. 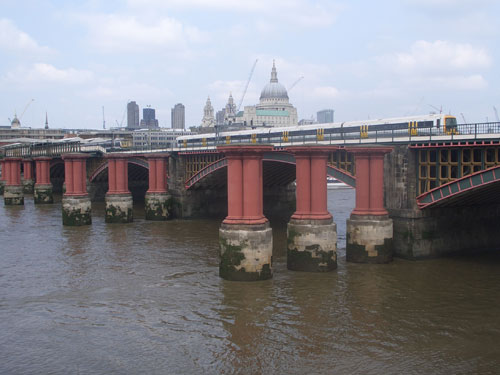 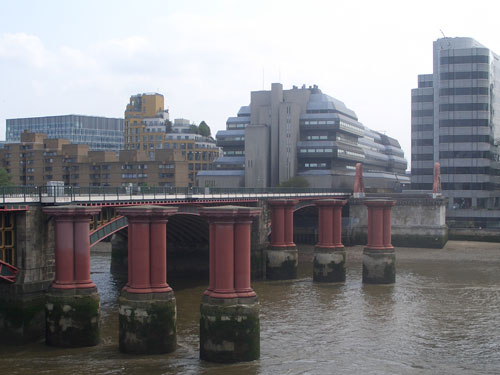 Alongside London's Blackfriar's Bridge runs a series of supports for a bridge that looks like it was never finished, or which was partially removed. The latter was in fact the case, as the bridge used to serve the London, Chatham and Dover Railway. Their insignia is still preserved at one end of what is left of the structure. 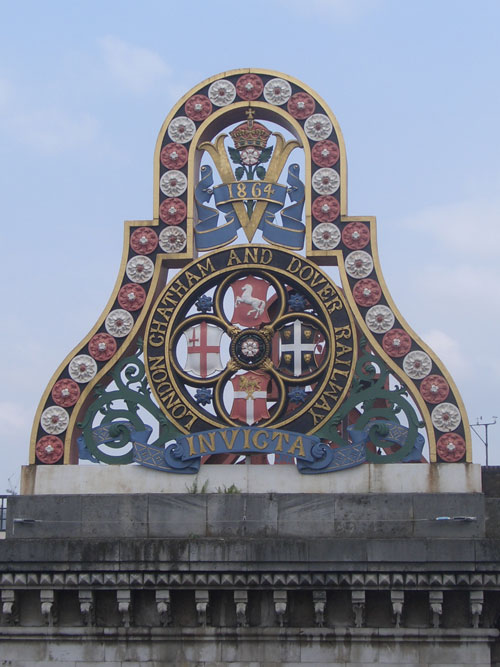 In 1862 The LC&D built one of the two stations that was to become the unified Victoria we know today. Their section houses platform's 1 to 8. Their trains had first run directly from London to Dover the year before, in order to connect with the steamship services they also owned.

They were not the only train operator plying that route - and until the end of the 19th century the London, Chatham and Dover railway competed with the South Eastern Railway Co. In 1899, faced with rising costs and falling profits, the two companies underwent a shotgun merger to form first the South Eastern & Chatham Railway, then from 1923 the Southern Railway. 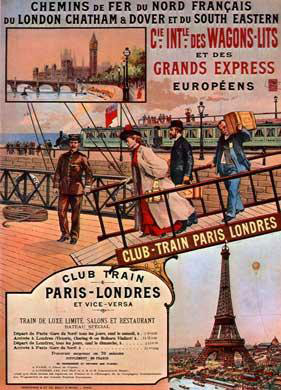 The merger wasn't complete however, and for many years, although interoperable, the railways were still separate operations that could be un-merged should it be deemed prudent. And it may have just been a good tax dodge.

"After many years of the most severe competition in the annals of the British railways, the South Eastern and the London, Chatham and Dover companies decided that it would be more profitable to work in harmony. But, as the law then stood, amalgamation would have necessitated the spending of a very large sum in stamp duties. It was therefore decided in 1899 to set up a Managing Committee for the purpose of working the two systems as one. Although each retained its separate identity as a company, the receipts of the whole undertaking were pooled in an agreed proportion. The Committee continued to exist until 1923."

The London, Chatham and Dover bridge over the Thames was removed in 1980s. It was designed by Joseph Cubitt and F T Turner, and construction started on it in 1862. It was completed 2 years later, and served a station that was then called St Paul's. The line had become rarely used during the course of the 20th century, eventually becoming goods only, and it was deemed too weak to support modern rolling stock. Nigel Callaghan's site has a picture of how the underneath of the bridge used to look. 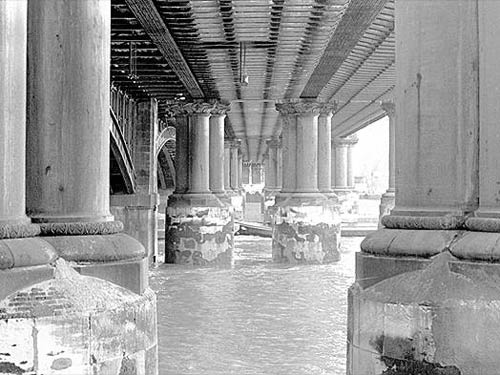 This print from the Oxfordshire County Council Photographic Archive also shows the bridge - it was made by James Dredge in 1897. 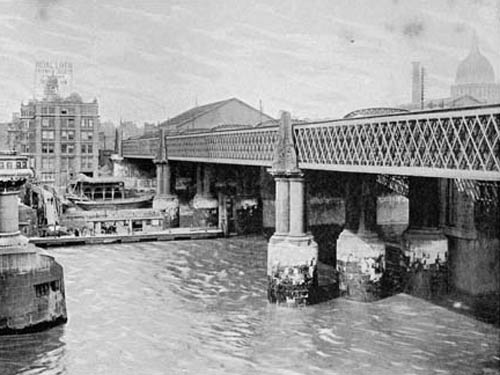 One of the best views of how the structure has been left isolated can be found using Google Maps - the shadows of the disused supports can clearly be seen reaching out across the Thames. 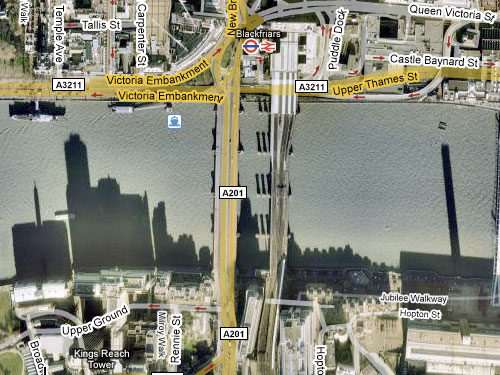 Take your photos while you can.

Next year major restructuring work begins at Blackfriars as part of the Thameslink 2000 programme, and the piers of the old bridge will be used to extend the station across the Thames:

The existing rail bridge will be comprehensively rebuilt to allow for the construction of longer platforms. This will include an expansion to the West utilising the foundations of one set of disused bridge pillars last used by an adjacent railway bridge demolished in 1985.

IIRC, the reason the supports are still there is that they couldn't be removed without damaging the foundations of the bridge next to it.

Set in a small garden, on the north bank, in line with these old pylons, are a couple of benches.

If the weather is pleasant, you might find a couple of people, sitting, reading.

It is a lovely spot, despite the constant drone of vehicles on the roadway bridge to the west, and the roaring clatter of the odd train to the east.

I believe they found the Pope's Banker hanging around here.

I have to say one of the plus points of making the trip down to London are those rare occasions when you can leave the beaten track. Wandering along the Thames near Southwark has been one of them!

It has occured to me on many occasions that we should see the construction of housing/flats on/over our bridges . Perhaps some such use could be made of the existing piers in this way and could incorporate shops and a walkway. As a surveyor the supports look substantial enough especially given modern lightweight building technologies available today. If it happens I'd love to be involved.

I spent 40 odd years working in the City of London, quite often close to Blackfriars. The old railway Bridge was in a state of disrepair for most of the time I knew it but I always admired the beautiful crests and badges on it. I am now retired and have, as so many do when we have the time, started looking into my family background. It seems my family, who were country blacksmiths,moved from Dorset to Bermonsey (then in Surrey) to work as blacksmiths and farriers on the railway, most probably the London, Chatham and Dover Railway company. Still trying to confirm this. If it proves to be the case, it will be very satisfying.