The BBC News linking policy is simply clumsy, not 'greedy'

In a post over at Blogstorm, Patrick Altoft has rather dramatically accused the BBC News website of an 'outrageous act of selfishness and greed' with the way that they link externally. 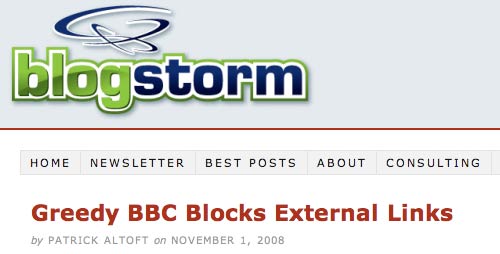 Essentially, he's noticed that now BBC News links pass through what used to be known internally at the BBC as the 'Go tracking system'. When a user clicks on an external link, the request first goes to a BBC URL starting www.bbc.co.uk/go/ and then onto the destination site. Blogstorm argues that this prevents Google from indexing the link as a direct one from bbc.co.uk, and so none of the precious 'Google linkjuice' gets passed from the BBC site to the external one.

I thought this was an interesting illustration of 'you are what you measure'.

The BBC originally introduced the 'go' method as a crude system of providing link tracking internally. For reasons too long and complex to go into here, in the early 2000s, bbc.co.uk didn't have a unified web metrics package that could do internal link tracking with any degree of speed or reliability. By tagging links to internal BBC sites with the 'go' prefix, editors could get an idea of what clickthroughs were being made from the BBC homepage and other key index pages. And of course it could be implemented with Perl and Apache, so it was easy to get Siemens to agree to implement it.

When the Graf review took place in 2004, he was sharply critical of the lack of traffic that the BBC was sending to other British websites. As a result the BBC was instructed to measure how much traffic was sent downstream from bbc.co.uk to elsewhere on the web. Again, because of the lack of a unifying metrics solution, and the haste with which the BBC's governing bodies wanted the data collected, the simplest, cheapest and quickest solution at the time was to allow the '/go/' redirect method to also pass on external links. This didn't apply to all areas of the site - including those from BBC News.

The Blogstorm post - which itself uses 'nofollow' so as not to pass on any link juice to those who leave comments - picks up on a change in the system, and says that:

"I can't understand why the BBC would want to do this. They could track clicks on the links easily without using a redirect and all the links are editorially granted so there is no risk of them linking to a spam site by accident. How is Google supposed to run a link based algorithm if the most trusted sites stop linking to anybody?"

The BBC has never, as far as I'm aware, been formally asked to measure how much PageRank it passes on to the web at large.

When the BBC Trust reported about the BBC's external linking earlier in the year, their sole concern was volume of traffic, not level of search engine influence.

If you look at the problem from the other end of the telescope, there could in fact be a case made for the BBC applying 'nofollow' to their external links in order to ensure a level playing field.

If BBC News carries a story about Internet security or yet more Government data loss, and links to a computer security advisory firm, then that link may provide them some traffic, but the effect of placing it there is confined to that page. If, however, the BBC was passing on their valuable PageRank with that link, then they would be giving one company a 'leg up' on Google at the expense of their competitors - effectively state-funded meddling with the natural linking ecosystem of the web.

If you needed any more evidence that this was all the result of regulatory ignorance rather than a willful SEO related policy, you need only search Google for 'site:bbc.co.uk/go'. You'll find plenty of evidence of the BBC carefully scuppering their own internal link structure and PageRank profile for the sake of measuring a few clickthroughs. 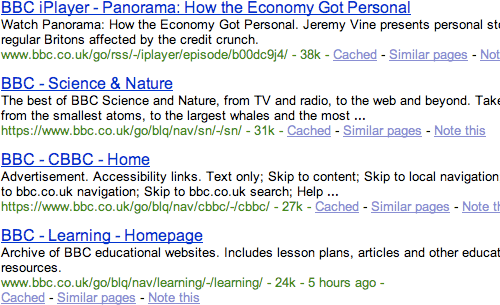 "Blogstorm argues that this prevents Google from indexing the link as a direct one from bbc.co.uk, and so none of the precious 'Google linkjuice' gets passed from the BBC site to the external one."

Has that been proven to be the case even if the subsequent request 302's to the real page? If not, then I'd argue it's Google's problem rather than the BBC's.

I'd be more concerned with the usability problems the /go system introduces - particularly the fact that 'visited' links aren't marked as so because of the crap that /go puts in there. Is there really no javascript fix for this? (Yes, I know some people have javascript turned off and wouldn't be measured, but surely this percentage is lower than the margin of error)

Hi Jason - I used the weasel words 'Blogstorm argues' precisely because I haven't verified either one way or another whether what they say is true about the PageRank passing.

I've moaned about this on the BBC Backstage mailing lists before, see here

One other annoying thing about the redirects is if you right-click and 'copy link address' in order to paste a URL into an e-mail or blog post - you end up in this case with the wrong URL.

The redirect links also mean browsers can't detect whether a link is 'visited' or not.

The BBC should work towards a more transparent solution for link tracking that doesn't break the hyperlink. Two ways to do this are a) to add a javascript function that reports external link clicks or b) to use the ping="" attribute.

I mentioned Frankie Roberto's "browsers can't detect" comment in a topic on this matter on Accessify Forum.

The BBC isn't alone in this. I started a list of mainstream sites that do something similar with external links. I didn't really ever finish it - most UK newspaper sites go out of their way not to link out these days.

If, however, the BBC was passing on their valuable PageRank with that link, then they would be giving one company a 'leg up' on Google at the expense of their competitors - effectively state-funded meddling with the natural linking ecosystem of the web.

That's a very interesting discussion point. One could argue (and I would agree) that the company that received the link had done something to deserve it, or least should have done.

It becomes the journalist's responsibility to select the most appropriate links. The classic case where this falls down is Wikipedia. So often journalists and bloggers alike will search Google for a reference point and find Wikipedia topping the listings, and select it out of convenience while there may be other more accurate or appropriate sources.

This obviously places a lot of responsibility in the hands of the journalist, but its surely more appropriate they are trusted than all links are not.

Adam, that's why getting links on Wikipedia is still really valuable, even though they apply 'nofollow' to them. A lot of people's research on a topic will start with Wikipedia, and get just about as far as the list of external sites at the bottom...

interesting times ahead me thinks

Frankie: The BBC are saying they are moving to just the JS system you suggest

The javascript link tracking solution isn't yet quite ideal (though it is an improvement) as it still changes the href attributes.

I've suggested that the javascript should be adding an onclick event handler instead here.

Many websites these days have either nodofollow or redirected links to stop spammers but if everyone did this it would be very interesting to see as this would make google have to change and make a new way of ranking as i personally think it is very one sided you cant buy in links but big companies get links on high pagerank websites which gives them an unfair advantage over the small person or businesses.

I can't imagine anyone at the BBC, or any other business for that matter, thinking about search impact of using redirect links instead of directly linking third-party sites.

But I can imagine folks who were benefiting from being linked by the BBC being a little irate about losing high-credibility links like that.

I've worked with a few reporters for local news (not on the scale of the BBC) and I'm sometimes shocked about how they get their sources. Sometimes it's the case of the first-available rather than the best-available source.

As the BBC are using Moreover.com it is unlikely that any value can be derived from outbound links unless they are hand-coded and not redirected...