Local online news video - where do we go from here?

With the announcement of the BBC Trust decision not to allow the BBC to go into English ultra-local news journalism, a huge amount of attention has fallen on the existing regional press. On balance, I think it was probably just about right not to allow the BBC to make more video content available in this area at this time, but, claims that this would have lead to a stifling of commercial content and innovation look pretty hollow if you are announcing that you are shedding journalism jobs on the very same day.

It seems like the verdict on Friday has set the clock ticking on a very short countdown for the regional press to save their businesses, before Ofcom and the DCMS might again have to move in and look at whether there has been market failure in the provision of local news. Which, as everybody keeps telling us at great length, is the cornerstone of our democracy.

I thought it might be worthwhile turning my blogging attention over to local newspaper websites for the first time. I've picked a selection of 20 titles with websites - the twenty titles that had the highest circulation according to these August 2008 figures. This includes papers that were not just in English areas that would have been affected by the BBC's plans, but also titles from Scotland, Wales and Northern Ireland.

Since the contentious area was video, I thought I'd start with a quick overview of the video content served up by these 20 papers. Do they make video available, what format or technology partner are they using, and is it embedded in the website homepage or tucked away?

Hopefully, over the course of the next few months, we'll be seeing improvements in the user experience and quality of the video provided by these sites, now that they are not facing the "crushing" opposition of the BBC. It will also be good to see if there are difference between what happens on the English titles, compared to the others, as the BBC Local proposals were focussed on England. 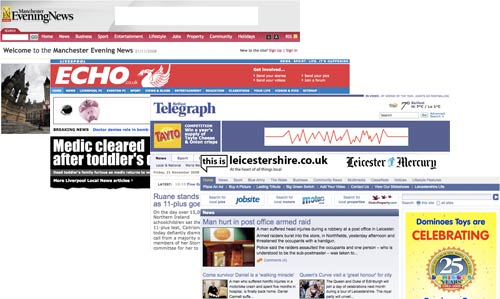 Video use on the 20 leading regional newspaper websites

P.S. In a worrying sign for how 'cutting edge' these sites are, I had to make nearly half of those favicons myself...

also you are missing the other South Wales Leading Trinity newspapers, who are under a portal name Walesonline.co.uk - South Wales Echo, Western Mail & Wales on Sunday.

I picked the 20 printed papers with the highest circulation, then Googled them as they appeared to get that list. I think that the circulation figures included some aggregated series of titles, so there may not be a complete match-up. To be honest, I could write at great length about how bonkers it is to have separate offline and online brands, but hey, you already know that.

Oh, and the maps, well, just put that down to a slip of the keyboard on my part. It wasn't geographical ignorance, honest ;-)

Nice table. Thanks for doing that. Love to see a few more columns added: tracking a few other factors. I think the Trust's decision is a real blunt instrument and that the dire circumstances of the local papers could actually have been eased if the BBC had been required to go ahead and create all that video as planned but then package it in a free-to-use player for local outlets like these to use. If they'd wrapped the player in some open linked data like the stuff that's going into the BBC's new topics pages this could have been a very rich addition to any local media owner's toolkit.

The Livepool Echo does embed video on their homepage and it seems to use a mix of self hosted FLV as well as YouTube (and even self-hosted SWF playing YouTube-hosted video!)

Thanks Mike, duly noted - if I have to make a third correction to this table I will never be able to criticise a journalist for making mistakes whilst under time pressure ever, ever, ever again.

The only local news video website I know of that actually works is Felixstowe TV - felixstowetv.co.uk - which has now been operating successfully for four years. I started it, but passed it on to younger, and keenly interested operators a couple of years ago.
It has featured on BBC2 Newswatch, ARD in Germany, and Canal+; it seems to hit a very nice audience, and because it isn't overtly highly commercial, does get good responses from users.