'Hornsey Past' with Steven Denford at Hornsey Library

Last Tuesday I went to Hornsey Library in Crouch End to attend a talk by author Steven Denford about his book 'Hornsey Past'. As I've just moved into the area, it seemed like a good opportunity to get a grounding in some of my new basic local history. 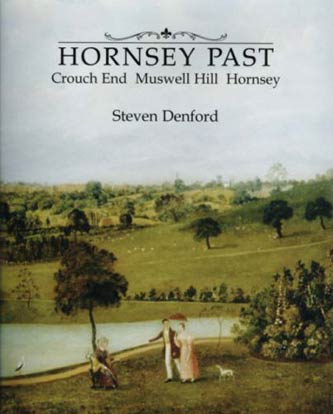 Denford himself, in his introduction to the topic, admitted that the old villages were never 'caught up in national events', and unfortunately, the subject matter turned out to be a rather dry affair. For much of the time since the late 200s when a Roman coin hoard was deposited in the area, Crouch End, Muswell Hill and Hornsey have been a rural backwater. For that reason, a lot of the format of the talk transpired to be that 'gentleman developer x had acquired plot of land y and built estate z'.

Amongst the worthier anecdotes was the fact that Muswell Hill had formerly been a site of pilgirmage, following the miraculous cure of a King of Scotland - possibly Malcolm IV - at a well in the area. A less fortuitous medical happening was the death of Sir Francis Bacon in 1626. This is famously supposed to have happened after he tried an experiment in freezing a chicken using snow, and contracted pneumonia. Denford suggested that local folklore tells of the area being haunted by the anguished squawking of the chicken. 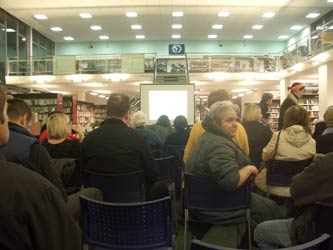 The talk was illustrated with some slides of photographs, sketches and maps of the area through the ages. It was poignant on Remembrance Day to see a photograph of young men signing up for the Great War in Muswell Hill, and there were slides of bomb damage from World War II, when 80% of local housing stock was affected by the Blitz, V1 and V2 rockets.

The images gave a tantalising glimpse of how the local area might still have looked - with demolished train stations and a florid meeting house (replaced these days by a rather dull Sainsburys) being just a couple of the views of the area that have gone forever.

The Hornsey Past: Crouch End, Muswell Hill and Hornsey by Steven Denford is published by Historical Publications Ltd.

Welcome to Crouch End, you'll probably like it here. Another point of interest is the Highgate Literary & Scientific Institution which has regular lectures and a superb member's library. Cheers.