This week Depeche Mode announced what Fletch said was their "rather modestly titled" Tour Of The Universe. It gave me an opportunity to have yet another truly diabolical user experience with Ticketmaster. 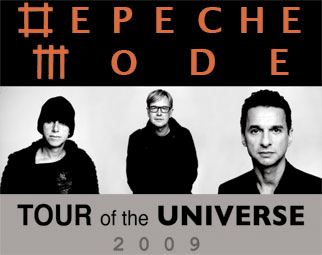 I got an email alert from Live Nation that the tickets for the London gig were going on 'pre-sale' at 9am on Thursday morning. In order to be able to buy tickets you needed to register with the Live Nation site.

Naturally, I did that, and come five minutes past nine yesterday I was starting to try and get tickets. I logged in to Live Nation, and clicked the pre-sale link. This took me to the Ticketmaster page for the event and logged me out at the same time without telling me. 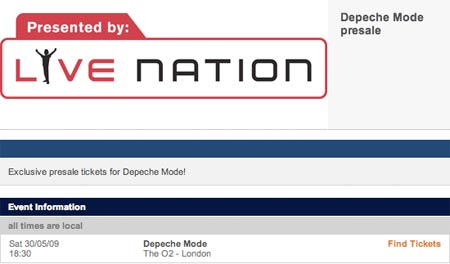 I selected the tickets, and then the fun and games began. Once I eventually realised that I had to log in to Ticketmaster as a separate registration from the Live Nation credentials I had already provided, I couldn't remember the password for my ancient account. So I asked for a password reminder.

Now, Ticketmaster go out of their way to make the ticket purchase processing as nerve-racking as possible, by providing a minimum time to complete each step of the transaction.

By the time they had actually sent me a password reminder, I had "lost my place in the queue", and had to start the transaction from scratch...

So, having selected tickets for the second time, I got to the payment section. Ticketmaster have some previous details for my card. The expiry date is wrong, and the billing address is wrong.

I carefully edited and re-edited every field on the details - to no avail. All I got was the error message "There was an error with your submission". I'm not sure they could be any more vague about what was wrong, and above it was the ever-dwindling countdown until my tickets were 'released' back for other people to buy.

Aside from the constant countdown, the site keeps asking you repeated captcha tests. This screenshot might give you an idea of just how many tests I had to pass during the process of this transaction. 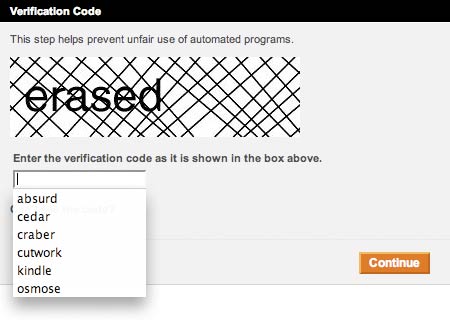 In the end, the only way I could complete the sale was to log out completely of the site, start from the Ticketmaster homepage, go into the account management section and edit my details there. That worked fine, with none of the problems the site exhibited when you tried to update your details mid-sale.

I finally got our tickets at the fourth attempt, having progressively moved from getting standing tickets to being up in the gods at the O2 Arena. As my wife wryly observed, at least we'll be able to hear them.

Still this was a marginal improvement on the last time I tried to buy tickets from them a couple of months ago. Then I was on dial-up in Greece, and often the 2 minute time limit to complete the details on a page had expired before the page had actually downloaded. That time a similar inability to edit my details meant I ended up just getting my wife to set up a new account and buy the tickets for me.

I first saw Depeche Mode on their 'For The Masses' tour in 1988 at Wembley Arena, when I was supposed to be revising for my mock GCSEs. It is always a risk buying tickets for a tour before a new album has been released from a band at this stage in their career. At the minute I've got no way of knowing whether the gig will be fantastic like the one we enjoyed in Milan on their last tour, or whether the album is going to be a dud of 'Exciter' style proportions. A clip from a couple of new tracks has already surfaced on YouTube, subsequently pulled down following an EMI Music copyright infringement complaint. So, fingers crossed... 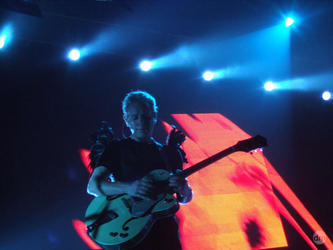 Fab. My favourite band are playing a gig a 15 minute bus ride from my house.

But, quite frankly, ...
We couldn't find tickets that matched your request.
...I can't be bothered to fight my way through Ticketmaster's tedious incompetence.

While no defender of some of Ticketmaster's practices, or user interface failings, I think they're head and shoulders above the wilfully inept crettins at Seetickets. I have never once seen the Ticketmaster site crash, yet on the other hand, Seetickets falls over if more than 2 people try to access the site at the same time. Of the big ticket agencies, I'm afraid that Ticketmaster are the lesser of two evils.

Booking for Steve Coogan at the same venue in December:

- setup a couple of alarms and Google calendar notifications to remind me at the appropriate time.

- 3 attempts at online booking, all of which reached final page before a generic "Sorry, there has been an error" message - with no error code or advice as to what to do next

- found, by accident, telephone booking number. Entirely automated and worked first time, but very lengthy. Don't recall an option at any point to speak to a human.

- Cost: ticket £39 plus £5 booking fee plus 5 mins on an 0870 booking number plus another £2 or so to send the ticket to me by post (which I've now received - not that the line gave me any choice of how to collect the ticket.)

My understand is that in addition to the ticketmaster, tickets.com etc. webservers, these agencies typically install software on a PC in the venue which is kept in sync with actual box office bookings, and if this machine is down or unreachable the booking fails.

I had a very similar problem. I had forgotten my ancient password with ticket master and I got onto the livenation page at 9.01am and had best selection seats. BUT as I couldn't remember my ticketmaster password and they said that they would send me a temporary one that ticket master then wouldn't accept!!!!!!!!!! I never managed to get ANY tickets!!!!!!!!!!!!! Am now having to succumb to getting completely ripped on by buying tickets from resale websites! £45 tickets selling for £250.