NOW Brand and Ross have f*&$ed up my vow not to rant about newspaper editorial...

So I vowed that when I got back to the UK I wouldn't expend energy on blogging about the editorial side of the media, just the technical side of things. It has taken about two days for me to tear up that pledge because I've got so aggravated about the Brand / Ross / Sachs sex scandal. 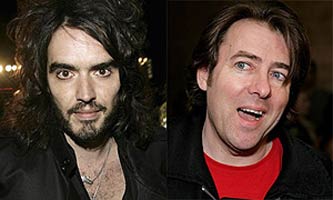 As far as I can tell from the reports in the press, between the programme being broadcast and the story appearing on the front page of a Sunday newspaper, a week had elapsed and there had been two complaints - neither of which were about the prank phone calls. Fast forward to when the story had been in all the papers, and over 10,000 complaints have rolled in. Almost certainly 99.99% of those from people who did not hear the programme.

I'm not a fan of Russell Brand. When I lived in Salzburg I dabbled with the podcast of his show because of the hype surrounding it, and found it pretty dull. And I don't think the ansaphone "joke" is that funny. But the press have been describing the furore as 'unprecedented', although they obviously have a short collective memory as the number of complaints so far is still insignificant compared to the campaign waged against "Jerry Springer: The Opera".

What struck me was that I was flicking through Quentin Letts' "50 people who buggered up Britain" book in Waterstones today, and saw that one of his nominees was 'Webnonymous'. Letts complains about the poison of anonymous sniping on websites that has infected society. He writes that as a named columnist he was used to getting the occasional bit of hate mail, but at least in the old days you felt that the person had taken the trouble to pay for a stamp and walk to a post box. He compares the situation now, when it seems that people in Britain are quietly seething with impotent rage and pouring out anonymous invective from their keyboards.

An army of people who this week are specifically seething that overpaid Jonathan Ross dared to swear at that nice actor from Fawlty Towers, but meanwhile don't seem bothered that The Sun took it as an opportunity to print topless photos of the lady whose honour Ross and Brand so beastfully besmirched. 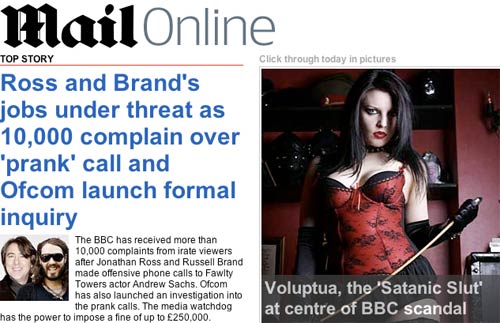 It is interesting to compare the situation with this show and how complaints play out with the ASA and the PCC.

If the taunting of Sachs about his grand-daughter had occurred in a column written by Brand in a newspaper, then my understanding of the PCC code of conduct would be that only Sachs or Georgina Baillie themselves would have been able to make a complaint because it personally affected them. Everyone else would get a polite letter saying, sorry, your complaint isn't the type we adjudicate on. Well, that's what I've always received from the PCC anyway.

By contrast, in the case of the ASA and adverts, they can get pulled with a much lower level of complaints - sometimes it seems just 20 or so complainants out of a population of 60+ million is enough to see an advert withdrawn, and 200+ complaints is a record.

Still, Ofcom are now involved. Given the scale of the Brand / Ross complaints, it seems almost certain that they will levy a fine on the BBC again, just as they did with Blue Peter and "the cat flap". So essentially, a group of Licence Fee payers have been whipped up into a frenzy about a programme they didn't hear, and the end result is that some of their own money will go straight to the coffers of the Government.

Which, if it deprives the BBC of revenue, I think most of them will be pleased about.

It might be rather nicer and more appropriate if the fine didn't go straight into the treasury though, but instead was chipped directly off everybody's Licence Fee for next year, eh?

I know, I know. This was even a cut down version of the rant I wanted to write - and look, no pictures. I *always* have pictures on currybetdotnet, but I was so froth-at-the-mouth to publish this rant I didn't even take time to rip off a BBC Press Office picture of Brand or Ross. Or the awesome Daily Mail website homepage which actually had "Ross / Brand shame disgust hang 'em etc etc" as the headline, next to a picture of the wronged grand-daughter in her lingerie with the headline "The 'Satanic Slut' at the centre of BBC scandal".

Come on Martin get with it - this is clearly a matter of national importance:

Brown speaks out over prank calls

The audio is readily available on youtube, and possibly even on the BBC's own various "listen again" options. Even so, I doubt that more than a couple of percent of the complainers bothered to track it down. I did, and it was a waste of 20 minutes of my life. It was neither particularity comical nor offensive. It wasn't even that shocking, shock being a fair yardstick for modern entertainment's apparent worth. Worst BBC related scandal ever.

Am I too jaded if I notice that all this Brand related outrage hit the headlines in the week his new series of Ponderland is due to start on Channel 4?

Why are we even talking about this? Non entity C listers whose pathetic attempt at comedy has backfired and yet, we have every git wizard and his wife up in arms, wringing their hands about how awful it has all been. To the extent that Gordon Brown commented on it as well!!

FFS - lead the country - do you have THAT much free time?

I don't see what all the fuss about. It's not like the BBC didn't know about Russell Brands reputation when they hired him. Its just more political correctness gone to extreme.

As I've hinted on twitter (same username) the whole thing has been incredibly predictable.

I am curious to see what Michael Grade will do with regard to the British Comedy Awards which Ross is due to present in a few weeks time. If the BBC complete this internal investigation quickly they can probably get Ross and Brand back on air by next weekend, but the longer it drags on the more jittery other broadcasters who employ them will be.

What doesn't help is that there are still so many factions within the BBC that people are quite happy to bring it down from inside and fuel the story still further - perhaps partly due to Ross' comment about him being worth "1,000 journalists".

On News 24 earlier (I don't care about the branding, it'll always be News 24 to me) they crossed to Lizo Mzimba in the TVC car-park, and after a clumsy introduction, asked him "what he thought". To quote a favourite line from Broadcast News, who the hell cares what you think? He was presenting Newsround up until a few months ago. (And why not invite him indoors - its warmer there are you don't need a cameraman and a sat truck..) The story was even in the World Service headlines last night, although I note they switched the names around so that Jonathan Ross was first - presumably they thought fewer international listeners would have heard of Russell Brand.

I was interested that (earlier) according to Media Guardian, of the 18,000 complaints, 17,000 had been made online and only 1,000 by phone. Regardless of what you think of the responses (you don't like DOGs, but we think they're good for you - etc.) the site is really nice designed and the complaints form (it seemingly runs on perl) goes like the clappers. So, you know, every cloud...

it seemingly runs on perl

No seemingly about it. It does. My old team launched it.

I've put a couple of pictures in now - although not the ones that all the people who arrive on this page after searching for "georgina baillie topless" were hoping for! Martin Moore has a good post picking up on some of the points I've made with a bit more accuracy.