I've never seen so much global excitement about particle physics as there was yesterday, but I think Al Jazeera must take the prize for playing up the sensational angle of the story on their homepage.

For most of the day, the whole complex area of sub-atomic particles was reduced to the following headline and strapline: 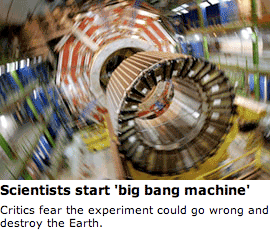 The alarmism was neatly punctured by the very first comment on the story itself from a user, Elliott Bignell from Switzerland:

Sadly Elliott was fighting a losing battle on Al Jazeera though - the next comment was from Mahomed Hameed and said:

"These men are trying to prove the non- existance of God.Their big bang theory is 'bung'. The question is: How does the sun rise at exactly the same spot every morning? How are the seas contained on earth without spilling into space for millions of years. Obviously, the scientists have theories on that, but the reality is that they could not live a second if God merely changes the mixture in the air we breathe. Don't try to disprove GOD, and advocate a Godless society please!" 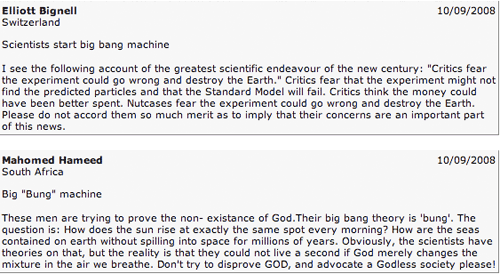 These arguments about God and mini Black Holes eating up the earth are pretty trivial if you ask me. The main question of the day was "Is the Radio 4 Torchwood episode any good?". Well, I'll be able to find out shortly. Kudos to the BBC for having it available for 7 days as a DRM-free, non GeoIP protected mp3 download.

Read other recent posts about: BBC, Doctor Who, Media

Most of these doom-mongers were missing the point anyway (or at least the media spin/jokes about it). They were just firing the beams up initially... we're not going to create black holes and destroy the earth for another week or two.

And, more importantly, well, was R4 Torchwood any good?

Ah, well, after all the excitement of downloading it, me and the missus haven't actually found 45 minutes to sit down and listen to it yet - perhaps over dinner tonight...

It was quite an enjoyable romp around the tunnels, as long as you got passed the 5 minutes early on that seemed to have been inserted by the BBC Schools GCSE Physics department, which reminded me a little of the way science and history were explained in 1960s Doctor Who.