I've been writing a series of posts looking at the history of politics, protest and dissent at the Olympic Games. On two occasions that dissent has turned into murderous terrorism. In 1972 there was an attack on the Israeli delegation that left 11 dead. In 1996 it was domestic American terrorism that killed two people and wounded over 100 others, when a bomb was placed at Centennial Olympic Park in Atlanta.

Alice Hawthorne was killed in Atlanta's Centennial Olympic Park when a bomb left by Eric Rudolph exploded. Melih Uzunyol, a Turkish cameraman who ran to the scene, died shortly afterwards of a heart attack. 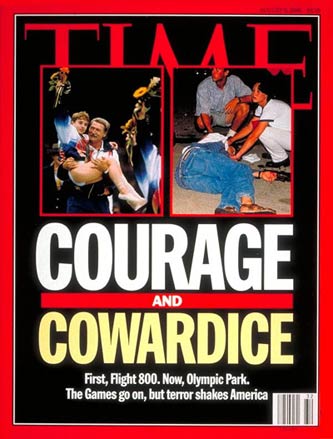 In 2005 Eric Rudolph issued a statement over his involvement with the bombings as part of a deal with the U.S. Government. In it he identified abortion and "the homosexual agenda" as two reasons why he felt that the Federal US Government had lost the moral authority to govern. Specifically on the Olympic bombing, he stated that:

"For many years I thought long and hard on these issues and then in 1996 I decided to act. In the summer of 1996, the world converged upon Atlanta for the Olympic Games. Under the protection and auspices of the regime in Washington millions of people came to celebrate the ideals of global socialism. Multinational corporations spent billions of dollars, and Washington organized an army of security to protect these best of all games. Even thought the conception and purpose of the so-called Olympic movement is to promote the values of global socialism, as perfectly expressed in the song "Imagine" by John Lennon, which was the theme of the 1996 Games even though the purpose of the Olympics is to promote these despicable ideals, the purpose of the attack on July 27 was to confound, anger and embarrass the Washington government in the eyes of the world for its abominable sanctioning of abortion on demand." 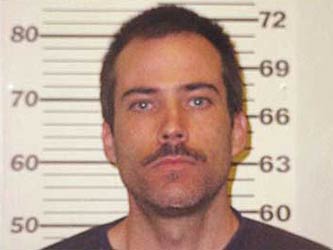 The 1994 FIFA World Cup had been the first global sporting event to have a dedicated website. By 1996, CNN was up and running online, and the story of the Atlanta bombing was the first Olympic dissent to be covered as a breaking news story on the Internet. 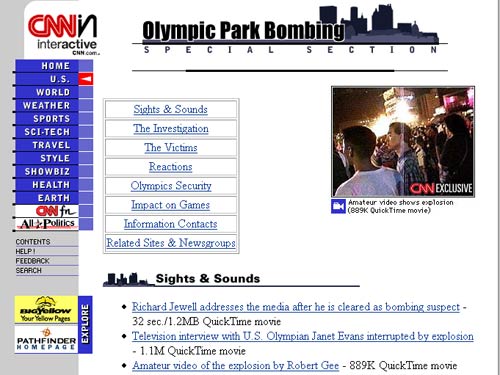 Robert Gee became the Olympics' first citizen journalist, with his amateur footage of the explosion. The footage can still be viewed on the CNN site, and, of course, on YouTube.

It was years before the US were able to bring Eric Rudolph to justice, and initially the suspect in the bombing was Richard Jewell. He had a long battle to clear his name, due to a terrible 'trial by media' ordeal which was surely a factor in his early death at the age of 44. 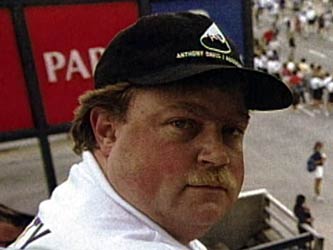 Initially he was hailed as a hero, as it was Jewell who spotted the suspect device in the park, and was able to clear the area a little, which undoubtedly saved lives. However, he soon became the focus of the police investigation.

An example of the way the media treated him were comments made by NBC anchorman Tom Brokaw on air after Jewell was named a possible suspect:

NBC eventually had to pay $500,000 in compensation to Jewell, but that was far from the only media outlet Jewell had problems with - and at one point his lawyer announced their intention to sue everybody from A to Z.

The New York Post settled out of court with Jewell, but the Atlanta Journal-Constitution stuck by its reporting. It headlined a story "FBI suspects 'hero' guard may have planted bomb" and described Jewell as 'an individual with a bizarre employment history and aberrant personality'. The paper refused to settle, and at the time of Jewell's death he was still battling to clear the stain on his name, and a further court date for the case had been set for January 2008.

At the closing speech of the 1996 Games, IOC President Juan Antonio Samaranch surprised the hosts by describing the Games as "most exceptional". This was effectively damning them with faint praise, as traditionally Samaranch had always described the Games he was closing as the "best ever". That was how he went on to describe the next Olympics - the 2000 edition in Sydney.