'Received pronunciation' for London from TfL

The BBC is famous for having an official 'pronunciation unit', that was the ultimate arbiter of how things should be said on air. With the drive towards using regional accents on television, and a move away from 'received pronunciation', the unit probably has more demand now for how to pronounce foreign names and words, than for working out whether English children were going to grow up saying 'bafth' or 'barth'.

You could access a lot of the content via the BBC's intranet, where pronunciations were recorded as little sound clips, and occasionally, when a new foreign dignitary arrives on the scene with a tricky name, the 'pronunciation unit' will issue a public edict via the BBC's Editor's Blog as to how it should be said. 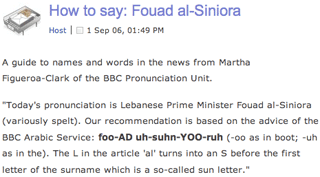 TfL must have some similar kind of unit that decides how the destinations are going to be pronounced on the announcements that chime out on their new talking buses. Having grown up in Walthamstow, it has come as a bit of a shock.

(You'll have to bear with me here a little, as I have never understood the phonetic spelling of words with dipthongs and diaresis as illustrated in dictionaries. And even if I did, I certainly don't know how to make them appear in UTF-8 encoded HTML) 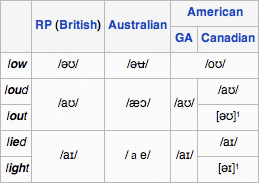 The 34 route is the prime culprit here. As you approach the Crooked Billet roundabout on Chingford Road, you come to a junction with Cazenove Road. All my life this has been pronounced in a good old-fashioned East End way, with a long 'a' sound, and only two syllables - Kaaaysnove Road.

Not so, according to TfL. It is a three syllable word with a very short 'a' sound - Kas-a-nove Road.

The next stop is George Monoux College. Sir George Monoux was a Lord Mayor of London in the 16th century, and left money for the foundation of a school in Walthamstow. It may be written George Monoux, but the majority of E17 natives have always known him and his school as George Monucks. 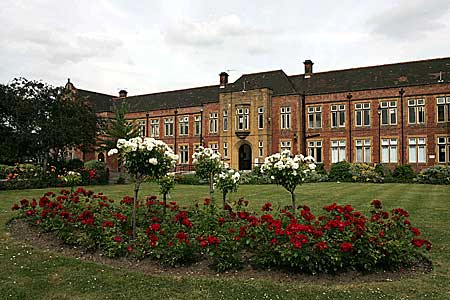 Step forward TfL, with their posh and correct French-sounding George Moneau complete with very silent 'x'. They aren't wrong, after all, nobody goes around talking about "Louis Therocks' Weird Weekends" do they?

The thing is though, I already hear people around me in the 'Stow adopting the TfL pronunciations in favour of the now discredited local dialect. Even as the BBC has given up on their mission to standardise regional pronunciation, it seems like TfL's 'pronunciation unit' could end up producing a London-wide 'received pronunciation' for place-names.

Well, at least those near bus stops, anyway.

In contrast, I don't think I've ever heard anyone use Croydon Tramlink's announcements as a basis of speech.

Especially not the way that Nicholas Owen (for it is he who does it) says "Bel... [huge pause] grave [huger pause] Pork" for Belgrave Walk.

I noticed they've switched back to using "Monnox" for Sir George Monoux, recently. I for one prefer it the "correct" way, rather than our local bastardising of it. Dialect is one thing, but ignorance of historical figures is another.

Thinking about it, we should also pronounce Roger Ascham as Askham, rather than Asham, which is how I remember it being pronounced when I grew up in the area.

I believe Aveling park was also pronounced with 2 syllables, and a long A sound, "Ave-Ling", rather than the TFL/correct way of "Avel-ing".

However I think the new generation of Walthamstow school attendees need all the help they can get with grammar, spelling, punctuation and pronunciation, so perhaps TFL should be applauded for their actions, and we should demand they give Monoux the respect he deserves by at least getting his name right!

In fact, I think I may need to set up a facebook group for it just to see the reaction it gets :0

The two talking bus pronunciations that amuse me are Crarch End (Crouch End) on the W7, and Badsea Bridge on the number 19.

Andrew Johns, did you ever set up your Facebook group? Any more? A full list would be fun.

This is a very interesting article and I also enjoyed reading the comments. Until recently I had always pronounced George Monoux, as it now appears, correctly but met two of the college's employees while on a course in the summer and was told that it was pronounced Monnox. I wasn't convinced, even though I then heard others pronounce it that way. My desire to find out the correct pronunication became even keener when my son started the round of Sixth Form College open days a few weeks ago. I frankly felt stupid calling it George Monnox when I was certain that was the wrong pronunciation. My son and I had a discussion on the matter and agreed that we were sure it should be pronounced with a silent 'x'. Therefore my search on the internet which led me to this site. I would like to thank all the contributors as I now feel able to talk about George Monoux with confidence and to stand my ground when anyone challenges me on the pronunciation.

I hate to worry you Joanne, but I was on a bus yesterday and heard for the first time that the TfL pronunciation has reverted to 'Monnox'.

I stumbled on this thread while browsing keywords related to my childhood. As a young resident between 1956-66, I lived in Ave-ling Park Road,my best friend lived round the corner in Kaaysnove Road and we aspired to go to the Monner School on passing our 11-plus.

Martin, thanks for the update - I haven't been on that bus route for a few months now. How depressing that TfL should bow to local opinion rather than sticking to their guns. Personally, I will be sticking to my silent 'x' no matter what!