Over the last few days I've steadfastly avoided writing about the blogging and twittering hype around Macworld. This is not especially because I'm an Apple naysayer, but I'm certainly not a fanatic. I think Apple make some very good products with some gorgeous packaging, but I also think they enjoy an incredible 'brand halo' which allows them to get away relatively uncriticised for quite major flaws like battery life and replacement issues, and over-charging UK customers on iTunes. [1]

One Apple item did catch my eye this week though. Forget the MacBook Air, today is twenty-five years since the Apple Lisa was put on the market. Never mind whipping a notebook out of an envelope, you had to whip out an envelope full of notes to get your hands on a 1983 Apple Lisa. Costing nearly $10,000, the Lisa ran a 5 MHz processor with 1 MB of RAM.

(Actually, given that at the time I would shortly be jealous of the Commodore 64's eponymous 64K of RAM compared to my ZX Spectrum's 48K, 1 MB sounds positively luxurious) 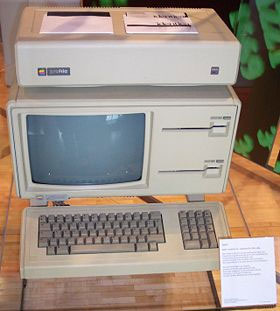 With Apple being the cultural icon in the computer world that they are, there are a couple of documents on the web that give a fascinating glimpse into how the GUI for the operating system was put together. 'Inventing the Lisa User Interface' by Rod Perkins, Dan Keller and Frank Ludolph is a 1 MB PDF, and there is also some great design material at 'Busy Being Born: A visual history of the development of the Lisa/Macintosh user interface'. 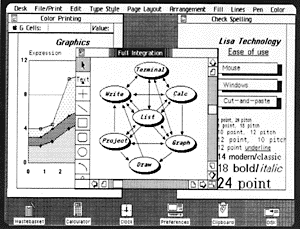 If that is too dry for you, then are a couple of videos of the Lisa in action on the web as well. You need to fast forward a little way in this YouTube video to get past the talking heads and onto the hot 80s computer GUI action.

This clip on Google Video shows the full agonising wait for the Lisa to boot-up. Actually, my rather battered and well travelled Dell Inspiron 2200 laptop running XP can take that long to boot-up on a bad day if it isn't in the mood, so who am I to scoff? Oh, and here is Kevin Costner in an Apple Lisa advert from around the time.

And just because it is vintage, doesn't mean the Lisa doesn't work anymore. This site - http://www.lisa2.com/ - claims to still be served from a working Lisa 2! 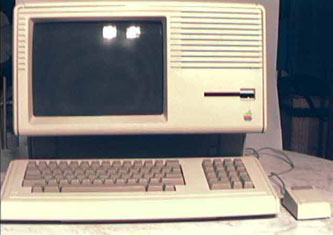 [1] The iTunes pricing issue is a real case in point. I'm quite sure that had another large computer software or hardware company been found guilty by the EU of systematically over-charging British consumers in a market where they held a near monopoly, there would have been acres of critical coverage. As it is, I haven't seen any real analysis of the scale of the issue. Has anybody in the mainstream media even calculated the number of UK iTunes single-track downloads and multiplied it by the 6p over-charge to find out how much Apple have raked in with this scam over the last three or four years? [Return to article]

I think the pricing thing has largely come from the record labels.

It's not that unlike the DVD regions, although multi-region players have made that a little irrelevant.