Over the last few days I've been writing about some of the variations there were on good-old fashioned vinyl LPs, looking at physical materials like Dynaflex, obscure formats like Quadraphonic Sound, and the 1970s attempt to embed copy-protection within vinyl pressings. When I used to work in the rarities department of Reckless, there was another particularly special brand of vinyl - audiophile pressings. 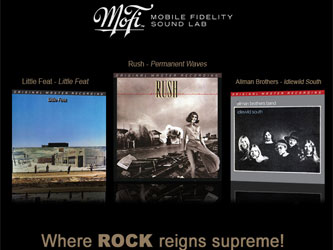 Audiophile pressings, during the 80s and 90s at least, were the specialist preserve of a couple of companies, including Mobile Fidelity Sound Lab. Audiophile albums were of a heavier grade of vinyl so that the grooves could be cut deeper, and the records were mastered and pressed using carefully-controlled improved techniques and named mastering engineers. Often mastering was done at half-speed, or with the DMM system, by removing one of the tape transfers from the process.

The result was albums that were pressed in limited numbers, and which exchanged hands for 30 or 40 pounds each back in the mid-90s.

In those days the range of artists represented was fairly limited to rock dinosaurs like The Who, and 'classic' albums like or Queen's "A Night At The Opera" or Pink Floyd's "The Wall". And Robin Trower for some reason. 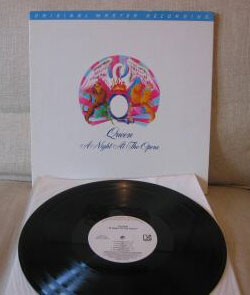 You'd think that as a genre it might have died out with the advent of the CD - after all we were promised everlasting great digital sound when they were launched. However there is still a big market for vintage vinyl pressings, and the audiophile movement migrated to CD as well.

It was possible to buy specially mastered, specially manufactured Compact Disc editions of albums as well. I myself have, by accident really, got a few of these amongst my CDs. They were, again, carefully mastered, and, before the advent of SACD and DVD, were regular format CDs pressed using gold rather than whatever-it-is that CDs are usually made with.

I always had an issue with the whole concept of specialist audiophile pressings. It seemed to me that the minutiae of how a record or disc had been produced had been allowed to take on greater significance than the music it contained. It didn't matter to me how you went about producing the physical edition - 'Dark Side Of The Moon' was always going to be a Pink Floyd essential, and 'The Final Cut' wasn't.

The feeling that the medium had become more important than the musical message encoded on it was emphasised by the packaging. One of the Mobile Fidelity CDs I have is U2's "Unforgettable Fire". The artwork for the album is reduced in size from CD packaging's already meagre 12cm squared to just 8cm by 8cm, in order to prominently advertise that this is the Original Master RecordingTM edition. Twice! 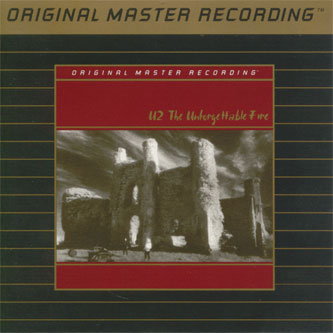 Likewise with the disc itself. There is plenty of room for various logos depicting the labels and processes involved, and even a statement that the disc is 24 Kt gold plated, but no room for song-writing or publishing credits for the band who have actually made the music. 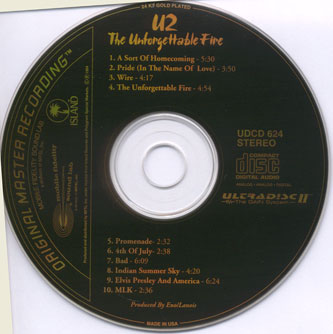 This trend was also apparent with vinyl audiophile releases, where the fact that they were pressed on 100% virgin vinyl or were an 'Original Master RecordingTM' was plastered all over the original artwork.

Audiophile aficionados will no doubt disagree with me, but when dealing with them as customers it always felt like their passion was for spending more and more money on obscure equipment, rather than a quest to find and enjoy exciting new music, which always to me seemed the most important part of being a rabid record collector.

Apparently you can now spend over $1,000 dollars on speaker cable alone, and even buy special audiophile mains leads so that the current that goes from the electric ringmain in your house to your music equipment doesn't induce any distortion in playback.

Of course, that I have no truck with this section of the music market may have a lot to do with the fact that I grew up accustomed to the sound of playing back knackered 45rpm singles on a record deck that had been in the family for 10 years by the time I got hold of it!

During the 80s and 90s, as well as Mobile Fidelity Sound Labs, Linn was another label that produced specially formulated vinyl album releases. In their case, making records was a by-product of their engineers dissatisfaction with the quality of vinyl that they were testing the performance of their Linn record decks with.

Nowadays the market isn't just confined to The Blue Nile on Linn, or those classics from the 60s and 70s - a quick search on a site like eil.com for 'audiophile' will reveal special vinyl and CD pressings of music by bands like The Cure, Nirvana and R.E.M.

It seems that most back-catalogue classic vinyl that is available today is pitched at the audiophile market, with the quality of the mastering and the weight of the vinyl grading important in the marketing of these re-issues.

I'd love to be able hark back to a golden age when records where just records, and they were all pressed to a high standard, but, like the 'golden age' of British television, it appears to be a myth. For as long as I can remember and before, with Dynaflex, Quadraphonic sound, analogue rights management, and recording and pressing processes like Dynagrove and FFRR, it seems it was ever the case that the record companies used differences in their manufacturing processes as a marketing tool for their products.

Very interesting. I have about a hundred LPs covering a wide range of pop, jazz, classical, and have just updated my old Hi Fi. The dynamic range of vinyl records appears to be superior on vinyl to CDs e.g. Beatles Sergeant Pepper. However, some LPS are clearly better recording than others. Billy Joel, The Stranger, (half speed mastered CBS Master sound) Paul Simon Graceland, great.

I want to purchase more records e.g. Tchaikovsky - Eugene Onegin, Armstrong plays WC Handy, Jesus Christ Super Star etc. but want high quality recordings. How do I find them? Pure Pleasure Records have a later Armstrong on audiophile vinyl, which gets excellent review but is expensive £22. I am happy to pay, but your article suggest that it is a rip off. Please advise.

I think maybe it's going a bit too far to call out the presentation of audiophile pressings as indicative of a misguided obsession. If you look at the two pressings of The Unforgettable Fire, the only difference between the two is the "additional engineering" credit missing on the MFSL disc. There are no songwriting or publishing credits listed on the disc to begin with!

As for the cover, the artwork was annoyingly small - I don't think anyone would disagree, but it had to be done to make it impossible to ignore that it was not the regular edition. MFSL had licensing issues to deal with when competing with regular editions of albums, and I'm certain they wanted to ensure that no one could complain that they were duped into buying the more expensive disc, which might threaten future licensing deals. Note that today they are selling new releases in mini-LP sleeve replicas.

As for the whole audiophile mentality, much of it is centered around getting the quirkily beautiful, obscure gear. A look through any audiophile magazine will give any sane person much to laugh about. Personally, anyone willing to spend $600 for a 3 foot *power* cable needs to reevaluate their priorities in life. It's one thing to seek out the best pressings of an album or CD, but another entirely to sink your life's savings into porcelain insulators that you somehow think improve the sound by raising your cables off the floor. Maybe it's just me, but I can't imagine how anyone with kids could possibly have anything of the kind around. As horrible as it may seem to true audiophiles, I stick with my iPod and 256/320kbps CD rips. It simplifies everything. Sometimes you just have to make do.