Watching the FIFA World Cup draw in Greece and online

You couldn't exactly say you got a flavour of South Africa from the TV coverage on ΝΕΤ of Sunday's FIFA World Cup draw. The hosts put on a vibrant show I'm sure, but in Greece our hour-and-a-half long programme mostly consisted of clips of Greece's Euro2008 qualifying campaign, and studio experts talking over silent coverage of whatever was happening in Durban. 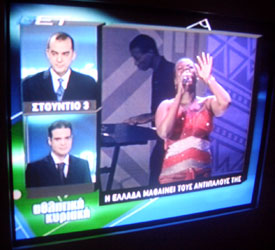 Although I understand it wasn't much better in the UK, with coverage shunted off to the red button of BBCi.

I thought I would see what the online coverage was like, and the representation of the draw was fine as far as it went - once you got there. It was a rather a shame that, for a global event with 200 participating countires, online coverage was geared towards the fraction of them with wide broadband infrastructure.

On my dial-up connection in here it took 7 minutes to get from typing in the FIFA World Cup URL to actually getting to the on-screen coverage of the draw. It was relatively well synched to the live event once it got going, but the huge download footprint of the flash movie required to produce a navigational link to the event on the homepage, and then for the event pop-up itself, severely sapped the will to live.

I noted it was cleverly encoded to make sure that the sponsor's logos rendered first whilst waiting for all the other data to be populated.

Another irritation was with the information about the draw format. The live chat accompanying the CONCACAF section suggested that the rules were quite complex, and that there was a link at the top of the window "Draw format" which explained what was going on. What it didn't say was that the link triggered the download of a PDF document, which again, over dial-up, took almost as long to download as the time it took to make the CONCACAF draw itself.

On the football side of things, a couple of months ago you'd probably think England had done well to end up in a group in which 4 of the sides didn't exist as independent footballing nations twenty years ago. However, following defeats in Moscow and the home-and-away reverses against the Croats, plus the inability to take maximum points from matches with FYR Macedonia, suddenly trips to the Ukraine, Belarus and Kazakhstan don't seem so appealing.

Mind you, at least the latter will allow the tabloids to trot out lots of Borat jokes.

My adopted homeland, Greece, however, were handed a golden ticket to the finals. Israel, Switzerland, Moldova, Latvia and Luxembourg should not pose any serious obstacle to top spot, and I'm pretty confident that come October 2009, Greece will be safely booked into the finals, and Israel or Switzerland will be the country everybody else is desperate to draw in the qualification play-offs.

I think my feelings were shared at ΝΕΤ as well, as when Greece emerged into Group 2 it was met with a resounding "Μαλιστα" or, in English football speak: "Yeeeeessss!!!!"