My photographs of Sedlic Ossuary gaining a wider audience

I was contacted a few weeks ago by some people asking if they could use my photographs of Sedlic Ossuary in a 'Sacred Destinations' travel guide for the area, and of course, I was delighted to agree. 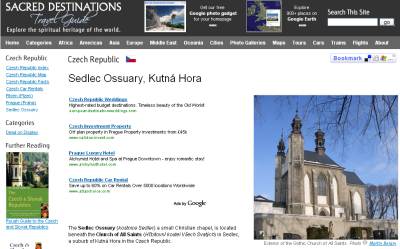 Sedlic is located in Kutná Hora in the Czech Republic, and was somewhere we visited quite early on in our tour of what is now known as "formerly Eastern Europe".

The "attraction" of the church is that it is decorated with bones. "This bizarre chapel had attracted a lot of wealthy citizens to the burial grounds through the years, after the Abbot of Sedlec had bought back from the Holy Land soil from Golgotha and sprinkled it on the cemetery.

In fact, unsuspecting people were not getting a short-cut to heaven by being buried in the sacred soil, but a short-cut to featuring in a tourist attraction. In the 1800s the frankly bizarre decision was made to dig everyone up, and use their bones to decorate the chapel.

Apparently the remains of 40,000 people make up the interior decoration, which includes massive pyramids of bones and skull, angels made of human bones descending from the ceiling, and even a giant coat of arms which features a rook pecking the eye out of skull that represents a defeated Turkish soldier." One of my pictures from there also recently featured on an excellent piece of link bait entitled "10 Most Fascinating Tombs in the World".

That has some much better shots of the interior of the Ossuary than I managed, but uses my exterior photograph as the set up.

The page itself has provoked a lot of comment, with people arguing for the inclusion of their nation's strange hanging coffins / mummified corpses / shrines made out of bones etc.

One suggestion I didn't see on the page was somewhere else equally creepy that we visited on our travels last year - Chiesa di Santa Maria della Concezione in Rome.

At the time I wrote about it:

"The first little room has bone decorations on the wall, and piles of skulls and bones, and lying in two niches a couple of skeletons dressed up as monks - which was a little odd.

The next room had five niches in the display of bones, and in each niche was a skeleton dressed as a monk, standing up, clutching a crucifix in their bony hands. Now propping real skeletons for display is pretty weird, but then it got distinctly odder.

In the next room the corpses dressed as monks hadn't even fully decomposed, so you could still see skin stretched across their skulls. And so it went on, getting grimmer and grimmer. In the last room there was even a cross made out of two severed arms which still had mummified flesh clinging to them.

I understand the message that the church was trying to get across - 'What you are, we once were. What we are, you will be' - but the display of a dressed-up corpses was surely the product of a sick mind. If you did it anywhere other than under the auspices of the church, you'd rightly get put away." 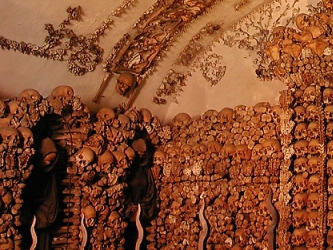