Haunted St Paul's and Barbican - "The city of the dead"

With it being halloween tonight, I thought it an appropriate day to continue the stories of our recent ghost walks...

During our recent stay in London we have done four of the walks from the Richard Jones "Walking Haunted London" book. Last week I wrote about our trip around Westminster, and a rather disappointing and long journey around Knightsbridge, Kensington and Notting Hill.

Our third walk was called "City of the dead", and started off from St Paul's station to head to the wreck of a Wren church which now stands where the old Greyfriars monastery once stood.

This area is reputed to be haunted by the ghosts of two historical beauties who have stayed more faithful to appearing on earth in death, than they managed to be to their husbands during life. Isabella, the 'she-wolf of France', was said to be behind her husband Edward II's notorious death, whilst Lady Alice Hungerford was boiled alive for murdering her husband. The two ladies are even reputed to have had a spectral fight at one point!

Our next stop was to stand outside the Old Bailey, and reflect on the fact that this was the location for many a public hanging. These would attract huge crowds of spectators - a fact I always find hard to fathom, but then again, I suspect a public hanging of the tabloid bête noir du jour would achieve even greater ratings today.

I liked the third stop best - The Viaduct Tavern. This is a surviving example of a Victorian Gin Palace, with plenty of original features. These include the booth where the landlady dispensed tokens - since staff couldn't be trusted with money - and the tokens were exchanged for gin. The place even retains a bullet hole in a painted backdrop which apparently dates from a party celebrating the end of the First World War. The backdrop itself features paintings of figures inspired by the statues on Holborn Viaduct, two of which were sculpted by one of my ancestors, Henry Bursill. 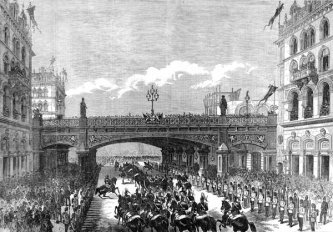 The Viaduct Tavern was built on the site of a debtors prison, and the cells are still extant. Staff can sometimes take you on a tour of the dank underground cells which are reputed to be haunted, but when we visited, the pub was too busy, which meant nobody was free to accompany us.

We probably should have had gin, but instead, after a swift beer, we continued on our way, past a watchtower where people used to guard against grave-robbers, and onto Pye Corner. This was the spot where the Great Fire Of London burnt itself out. It is marked by a statue of a fat child, symbolising the fact that contemporary Londoners believed the fire was a divine punishment for their excess. Of course, we all know that it was really started by a Terileptil weapon exploding. 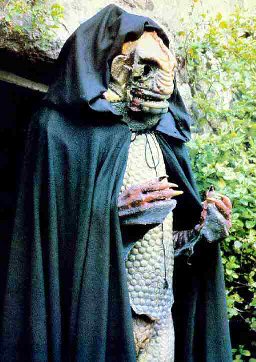 Next up was St Bartholomews Hospital. It is the location of London's only statue of one of England's most famous kings - Henry VIII. And the likeness is more accurate than The Tudors, apparently.

The hospital is steeped in history - and apparently haunted by a nurse who committed suicide after accidentally killing a child patient. She is meant to force a hospital lift to the basement against the will of the occupant, and then pursue them back up the stairs, moving the lift back up floor by floor.

The walls outside bear testament to something much more verifiable - they are smattered with shrapnel damage from a 1916 air raid by a German Zeppelin. During the First World War there was a lot of disinformation about the effectiveness of the air raids on British soil. It was a new phenomena, and as a consequence newspapers carried what look to modern eyes some fairly ridiculous assertions from the Government of the day.

Many Fires Reported, but These not Absolutely Connected with Airships

St Bartholomews is also on the site of the execution of Scottish national hero Sir William Wallace. A memorial was erected in the 1950s, and Scots today still leave cards and offerings to his memory some 700 years later. If you want a hint of the controversy that still rages about the accounts of his life, you need only look at the discussion page of his entry in the supposedly NPOV Wikipedia. The are was also somewhere where many people were burnt to death during the religious persecutions of the 1600s. 'Bloody' Mary put to death over 200 Protestants in her brief Catholic Restoration, many of them on the green opposite St Bartholomews.

Our next stop was the Priory Church of St Bartholomew the Great, which we reached through a Tudor era gate. The alleyway beyond was in near total darkness, as I began to recount how the graveyard is raised above the level of the walkways on account of the sheer number of bodies buried there. The church itself is also reputed to be haunted by the man who founded it - Rahere. A sandal was stolen from his corpse when it was exhumed in the 1800s, and now he is reputed to appear as a cowled monk figure inside the church.

We couldn't enter the church because it was locked for the night, but we still got a very good feeling for the creepy atmosphere, which took a turn for the worse when we suddenly spotted a dark mysterious figure in the deserted children's playground next to the alleyway.

However, a second inspection revealed this not to be the spectre of a 12th century religious figure, but someone sitting on a bench in the shadows, on the receiving end of what appeared to be a very enthusiastic blow-job.

The spooky atmosphere was somewhat shattered, and we ended up running away like giggly schoolkids who'd just seen something naughty.

The final stop on this walk was due to be Ye Olde Red Cow, a pub serving the Smithfields meat market, haunted by one-time landlord Dick O'Shea. However, we didn't find it. We think it has been re-named to The Long Lane, which was the only pub on the stretch. It didn't look terribly inviting though, and so, without being sure it was the scene of a haunting we skipped it, and finished the walk as described in the Richard Jones book.

That wasn't the end of our night however. This walk finished right by the Barbican, and another walk in the book starts from right there, so we continued, to go from the Barbican to Farringdon, and to explore the history of Haunted Clerkenwell. More of that, tomorrow, and in the meantime, have a happy halloween.

Someone once told me that in central London there are roughly five bodies per square foot (done on estimated population since London was founded divided by area) which is a wonderful mix of creepy and accountant.