Cheats never prosper. Well, not unless they are religious football cheats.

Some people say that sport and politics shouldn't mix.

Personally I find sport and religion to be a worse combination.

I hate to see religion being dragged onto the football field, whether it is the idiotic sectarian chants of Scottish football fans, or players crossing themselves as they enter the pitch, or pointing to the sky after they have scored as if some divine intervention was responsible for their talent and actions.

Divine intervention seems particularly out of place in sport, which is surely about pitting the athletic ability of man against man, team against team.

So I was dismayed to see at the end of the Champions League final one of the Milan players, Kaka, running around the Athens perimeter wearing a t-shirt bearing the slogan "I belong to Jesus". 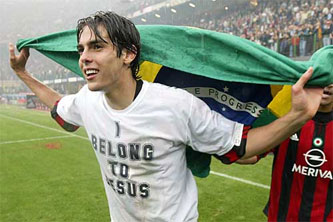 It is at times like that I wish I was the person doing the end of match interviews on the pitch.

Instead of asking questions begging platitudes like "It was a game of two halves, the other team must be sick as a parrot, I'm over the moon etc", I'd ask something else.

On August 2nd last year a UEFA Emergency Panel considered whether A.C. Milan should be admitted to the competition at all, after they were found guilty of their part in Italy's match-fixing scandal. UEFA's panel issued the following press statement:

"The UEFA Emergency Panel, being competent to decide on this matter, came to the conclusion that it had no choice but to admit AC Milan for the UEFA club competitions 2006/07 for formal reasons because of an insufficient legal basis in the regulations which would allow not admitting AC Milan under the specific circumstances.

The UEFA Emergency Panel made a clear statement to the club that 'this admission is far from being given with the utmost conviction. AC Milan takes advantage of the fact that UEFA lacks legal grounds to refuse the club's admission.

The UEFA Emergency Panel is deeply concerned that AC Milan has created the impression of being involved in the improper influencing of the regular course of matches in the Italian football championship.'

From the statement of AC Milan, the Panel concluded that 'the club has obviously not yet properly perceived the troubles it is in and the damage it already caused to European football. UEFA and the club's opponents will observe with the utmost attention the future attitude of AC Milan around UEFA club competition fixtures. UEFA will not hesitate to intervene severely, should AC Milan be involved in any activities aiming to arrange improperly the outcome of a match.'"

Last night, without any reference to that statement, UEFA awarded match-fixers A.C. Milan the trophy and title "Champions Of Europe", and the riches that go with it.

And that says a lot about the ethics of the religion of football.

you're a complete moron.

Secondly, he thanks God after every goal because he believes God intervened to save his life when he was younger, and so Kaka believes he owes everything he has to God

I guess you are right. I mean it isn't like he played in the games that were fixed, or profited from the fact that A.C. Milan were more successful due to match-fixing. Why should he have any kind of moral problem with that, whilst telling other people how they should live their lives?

He, kaka, is innocent of all the bullshit that they may have done... do some reseach KAKA is by far one of the purest souls in Football... So the hell what if dont like the writings on his t-shirts.. it's called Freedome of speech..

if not for freedome of speech i think a person as mean spirited as you could of been shot in the head for a bullshit article like this... SHUT DA' FUCK UP AND CONCENTRATE ON REAL NEWS.. leave this guy KAKA alone some one who's doing good in society.

My mum has got plenty of opinions about me already, but racist? I don't see that I've made any reference to anybody's race or nationality in this piece, just glaring religious hypocrisy.

Mr Handelaar appear to have made the only sensible contribution to this page so far ;-)

i dont know why do these people defend him... i believe that these players worship money only cash , nothing more

he is just putting it in a proper frame of religion

You probably won't get this but you are an idiot.

Are you telling me a player shouldn't be allowed to point to the sky if they score a goal you fool?

I don't particulary like Kaka's religious stance as he seems a bit over the top about it, but many player point to the sky to indicate this is ''for you dad''

Bullshit my friend...pure and utter bullshit.

the writer is not a fool, but it is you who is actually>>> caz Kaka is not pointing to the sky to say for you dad because this IS REAL BULLSHIT
If u know Kaka in the first place u would have noticed 'i belong to jesus' t-shirt he is wearing, so he is trying to be an icon and he begs people's love and affection in the name of religion.
I think u got it now, pale, and next time dont say about anyone to be a fool before checking out urself and remember "whoever throws mud Loses ground"