The BBC takes another hit from the 9/11 conspiracy theorists

The BBC, and more specifically BBC World, have been under fire this week again from 9/11 conspiracy theorists, after a video "emerged" which appears to show the BBC discussing the collapse of the WTC7 Salomon Brothers Building some twenty minutes or so before the building collapsed - with it at times still visible on screen behind the reporter's shoulder. 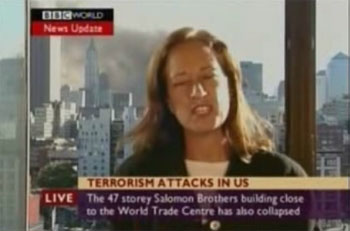 I say 'appears to show' because like everything in conspiracy theory circles, there are no clear-cut answers.

Because the footage is from BBC World and not BBC News 24 there is no time-stamp on screen. People seem to be basing the time of transmission on Philip Hayton saying something vague about it being 8 hours after the initial attack. Richard Sambrook meanwhile thinks that the pictures behind Jane Standley may have been a studio video-loop of the wreckage of the New York skyline, rather than a live shot.

So far, though, the BBC has struggled to defuse the claims, which are being fuelled by postings over on Alex Jones PrisonPlanet website urging people to deluge the BBC with emails demanding an explanation.

(In the UK you might best remember Alex Jones from his appearance in Jon Ronson's "Secret Rulers of the World" series, where he was featured infiltrating the secretive world of Bohemian Grove.)

Richard Porter, head of news at BBC World, has posted on the Editor's Blog to respond to the charges, but his explanation hasn't cut the mustard with the legions of conspiracy theorists. They are particularly incredulous of his claim that:

We no longer have the original tapes of our 9/11 coverage (for reasons of cock-up, not conspiracy). So if someone has got a recording of our output, I'd love to get hold of it. We do have the tapes for our sister channel News 24, but they don't help clear up the issue one way or another.

Despite the impressive archiving operation at Windmill Lane for the licence fee funded bits of the BBC that I once visited, I'm more than prepared to believe that BBC World is not capable of laying a hand on their original footage. Digital storage is a lot cheaper now than it was in 2001, but I can't see any commercial reason why a rolling 24 hour news channel would have had systems in place to retain material beyond the obligations they have by law.

Rather like the Digg crowd, the 9/11 conspiracy crowd can be like an unruly mob charging around the internet attacking anything that doesn't agree with their world view. Porter's post has already attracted over 200 comments, mostly claiming that he is a liar and that the BBC is complicit in covering up the truth about the 9/11 terrorist attacks on the USA.

Elsewhere, as a result of this latest 9/11 related Beeb-bashing, sites like Downing Street Says are getting spammed about it, and even I'm finding random entries on this site about the BBC are having pro-conspiracy theorist comments about the BBC World footage posted on them.

Some people think the footage is evidence that the BBC was 'in' on a conspiracy.

Some think it shows that whoever was distributing information on the day about pre-planned events let the cat out of the bag to the media too soon.

My personal theory, which I've just made up this second, is that the BBC was in on the conspiracy, but due to institutional left-ism, anti-Bushism and a downright communist funding mechanism, they announced the collapse early in order to give away the fact that 9/11 was a false flag terror operation.

It would seem to me, though, to be an astonishing co-incidence that this material and the apparent glaring error of WTC7 being visible behind the reporter was located and noted for the first time just now. It is a long five-and-a-half years after the footage was first transmitted, yet only a mere couple of weeks after the BBC aired a documentary debunking the 9/11 conspiracy theories.

I mean, you might even think there was a hint of a conspiracy to discredit the BBC about it...

Bottom Line: The "inside job" conspiracy theorists want the world to believe their own, by now, tedious theatrical hoopla and marketing hype while discounting the BBC as fraudulent.

Let's see, that would mean that according to the small die hard cadre of "Bush and Cheney are greater evil geniuses than Dr. No and Goldfinger combined" vendors, the BBC now joins the rest of the main stream Western media, the US's National Institute of Standards and Technology (NIST), 99.9 percent of the academically accredited structural engineers and professional metalurgists in the entire world, the original designers of the WTC, 99.9 percent of the bystanding witnesses and serving professionals who were there that day, almost the entire US Government, and, well, anyone who disagrees with them in an orderly, logical, and scientific manner, in a vast, all consuming, perfect conspiracy to deceive the entire world for the past half a decade.

Nothing that has actually happened in the past five years can disuade these amateur video producers, internet haunters, name callers, and self appointed expert lecturers that G.W. Bush isn't perfect at whatever fantastic, mission impossible concoctions they believe "The Great White American Father" is capable of.

It would all be quite hilarious if it weren't so sad and pathetic.

I'm not a fan of the BBC and the move towards infotainment news coverage adopted on so much of the corporation's output - as far as I'm concerned, it isn't what my wife pays our TV licence for. But I did enjoy the Conspiracy Files on 9/11 and I have a great deal of sympathy now it is getting so much flak. Perversely, I do enjoy reading the conspiracy theorists too. I cannot help wondering what might be achieved if they put their energy, imaginations and time to something a bit more realistic and positive. Or maybe that's what they want me to think...?

9/11 was an inside job... this is just another piece of evidence. Saying it appears to show wtc 7 behind her is pretty ridiculous. Its right there... behind her. you can see it... im not religious, but i like the quote "there are none so blind as those who choose not to see". and these times we are living in are clearly the times of Revelations... the RFID implanted chip being the mark of the beast which u wont be able to buy or sell without... soon these guys will stage another attack to justify war with iran. i hope more people wake up first and we can pull some v for vendetta style stuff.

Nick, you said it yourself. I can see WTC7. What I can't see is any time-stamp on the footage, or any evidence that the image of NYC behind her is live. That is why I'm quite happy to say "appears"

at last. some common sense.

SO now the BBC is denying when this event happened to confuse the Issue.

Just look at the Building fall people, free fall speed, no resistance to the collapse, neatly into its own footprint, use your eyes, trust your instincts.

If you are going to say that you trust the Govt line, why not trust that 1000's of engineers and architects who say the opposite.