AlJazeera.Net in English on the web

Since the launch of the associated television channel on 15th November, I've been itching to have a poke around and review AlJazeera.Net's new online English edition.

My interest in the site is of course partly because of my general interest in online news, and partly because AlJazeera.Net has something of the shock-of-the-new about it compared to our "Western" news media. Not least though, my interest is because a couple of years back I spent three days in Dubai having interviews with a different news organisation based there, whose strategic aim was to become the leading English language online news service in the region. Presumably, had I taken that job, I would have spent the last few months in a cold sweat once I found out that AlJazeera.Net were going to be launching into the same market.

Although it has settled down a little since launch, global demand seems to have far outstripped supply in terms of bandwidth, and I have had trouble accessing the new site for long enough in order to assess it. And sites under load can behave oddly, so even when I have been able to reach it, I've not been sure whether I have been seeing it as intended.

One thing that has particularly perplexed me has been the choice available of viewing the site in both Flash and HTML formats. Whether due to the heavy load the site is under, or some quirk of rendering in Firefox, the Flash version of the homepage of the site has been appearing to me with only black and white images, which turn to colour when I mouseover them. 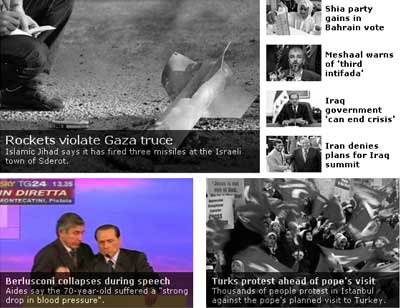 This appears to be the only difference between the two versions. If this is indeed how the Flash site is intended to work, it seems a very odd design choice to me, making AlJazeera.Net English the world's only online news service trying to give a first impression of being a newspaper before the advent of cheaper colour printing.

This isn't the only feature I find odd about the homepage. In the left-hand navigation there is a very prominent RSS icon - but no feeds are auto-discovered from the homepage.

The <HEAD> tag of their homepage may not have room for a link to their RSS feed, but it does contain a meta refresh tag, forcing a reload of the page every three minutes, which must surely be having an impact on their ability (or lack of) to serve the page in reliable volumes.

Another feature that doesn't appear to be working to the optimum is the "Most emailed stories" feature. Whilst three of the stories are recent, as far as I am aware, the self-referential 'Al Jazeera English goes live' has been the most emailed story since, well, when the site went live.

With the best will in the world, I find it difficult to believe that 25 days after publication, what is essentially a puff PR piece is still the most viral story published on the site.

Anyway, over the next few days I'll be posting about some of the other features on the new AlJazeera.Net English site that have caught my eye.

It is surprising that western world in their EGOISTIC way and US Hagemony entirely shun this programme. Is not not OSTREITCH WAY??
Why because it is taking lot of storey from other side or is it because it is run by Muslim owner??
Where is the balance?
Will sanity prevail?
Mehta

sir your map for somalia about the positions ethiopian fighters bombed you show that somaliland town kalabaydh.it's wrong no bambardment in somaliland soil but it was another kalabaydh near beledweyn south of somalia.last month the scatch for somaliland country you showed the viewers, somaliland containes only near hargeysa.
mistake not for you but those somalis who giving you informations are misleading you.becouse there are diffirence both side.
please be difine before airing.
thanks
AHMED ALI DERIYA- NAIROBI.

Arab leaders they can not call themselves a community and still faces foreing nterfrernce,they should unite themsleves just like the americans and israels.

i can't access www.aljazeera.net/english on my computer, i don't know why please help me out

May I submit that I was a littlebit prejudiced before I became fully interested and an ardent fan of Aljazeera tv.Your stories are balanced and credible.Recent docus on Haiti and Uganda and also issues afecting women and children are pregnant with reason and foresight .Keep up the good work.Iam a freelance journalist and lived in the east for 8 years.One of the authoritative newspapers I love to read from the Gulf was Khaleej Times.My advice to those who would want to colour Aljazeera because of its name-Dont judge a book by its cover.THank you.Wasalaam!

pls. do some kind of program focusing Bangldesh recent politic. I have not any such program from the channal yet

i am one of your advocater of your programs. but all the time you only focus at asian or midlle east country.please also give attention to african counrtries

the un told story.pse contact me and i help you discover the magic that the so called born again miracle pastors use to exhtort money/wealth from worshipers in Uganda-kampala.i fell a victim of the same.
thanx

to day Aljazeera.net(english) becomes our eyes on the global affairs especially on true and fair broadcasting of News without sentiment. before the launching the English net, we have an eyes only to see the pictures but we don't have the true-picture of what was happening. long live Aljazeera & their workers!!!.

I like watching Aljazazeera coz the news are always fresh n updated, instead of knowing Mr Rhiz Khan as the Host n already as the Boss, formerly he worked for CNN right? I suggest Aljazeere could make special broadcast news n others in Indonesian Languageas your programs viewer in Indonesia, thank you

I dont why Aljazeera is not processing on Darfur war or but i am sorry to called genocides. Is it that because Omar Hassan el Bsahir is an Arabs in origins and Fur are Africans by origins or not?. I love your websites but you should try to be very constants on all the news and documentaries you makes in regardless someone religions,races,cultures or geographical locations so please make Aljazeera more international. Mushala

Aljazeera is better than BBC and CNN. BBC is western oriented. CNN is the media of zionist israel. I am from Indonesia.