I've already written about the BBC having to make a response to people complaining about Doctor Who being too 'scary', which included a quote from the BBC's Complaints site:

"Doctor Who has never been intended for the youngest of children and in line with the BBC's scheduling policy, the later a programme appears in the schedules, the less suitable it is for very young children to watch unsupervised. We would suggest it would be a programme which 8 year olds and above would enjoy watching with their parents. Programmes for very young viewers are clearly indicated in the listings. The programme is well trailed giving a clear indication of its content."

Lo and behold the press in the UK picked up on it and amplified it into a story - this summary from Outpost Gallifrey:

'various UK newspapers ran versions of the report on the BBC's findings on complaints about "The Unquiet Dead." The Daily Express claims that the BBC has been "forced to slap an age warning on Doctor Who". According to The Sun, "The BBC has warned that Doctor Who should not be watched by children under eight". The Daily Star says that "Doctor Who is to get an age warning after ghoulish scenes terrified young viewers".'

By Thursday, in response, BBC News were running the story that BBC stands by 'scary' Doctor Who:

"The BBC has withdrawn advice about Doctor Who being too frightening for under-eights to watch.

A statement on the BBC's complaints website on Wednesday saying the show was not for children under eight had been 'a mistake', said a spokesman."

Correspondingly the offending advice has now been removed from the Complaints site, and the response to the Doctor Who complaint now reads slightly more blandly that:

We leave it to the discretion of parents to ultimately decide what is suitable for their children to watch. The programme is well trailed giving a clear indication of its content.

Oh well, at least it proves there is an audience for the Complaints site, even if it is just Fleet Street's finest.

If you've not been following it, the BBC has also been producing a site at http://www.whoisdoctorwho.co.uk/, which is running in parallel with the series, with characters from the show posing as the webmasters. I have to take my hat off to the team behind the site, who've made me laugh out loud with it a couple of times. After the first show aired the site had reports of people hearing a ghostly disembodied voice:

People claim to have heard the voice say different things. "What do I do now?", "Where are we going?", and "Is this live?" have all been reported, but none of them can be verified.

Of course, these were the exact words of Graham Norton as the sound-feed from Strictly Dance Fever leaked over the opening of 'Rose'. This week they've surpassed themselves, following the transmission of 'Aliens Of London', by publishing this picture on the site: 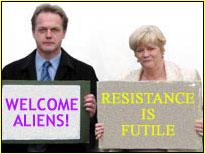 * I'll get my coat about the Doctorin' pun shall I?

It seems that the Dr Who response isn't the only one that's been 'Doctored': http://www.frankieroberto.com/weblog/408.xhtml

I seem to be getting a lot of 'Jonathan Ross complaints' searches arriving on my site, which either means that viewers are looking for more info, or just that the hacks are doing their research...

I have just watched the 'Jonathan Ross Show'

His interview with Pamela Anderson was abusive and appalling. Do we really call this entertainment? The BBC's standards are certainly slipping!