The user experience of reading the Leveson Inquiry report

The Leveson Inquiry report has been criticised for not addressing the impact of the internet on the press, and the way it was published today was symptomatic of old-fashioned print publishing that doesn’t put user need at the centre.

There were a lot of jokes on Twitter today that you could pay £250 to get the Leveson Inquiry report in print, or download it for free on the internet, which served as some kind of analogy for the state our newspapers find themselves in.

I think you could take that analogy a bit further — trying to read Leveson on the web might be free, but like a lot of news websites, there hasn’t been a great deal of thought put into the user experience.

Fair play to the Leveson Inquiry web team, when you went to the website this afternoon, downloading the report was probably the primary use case, and they did have prominent links on the homepage. Although given that the CMS is WordPress, quite why they had to be formatted as giant URLs I don’t know. 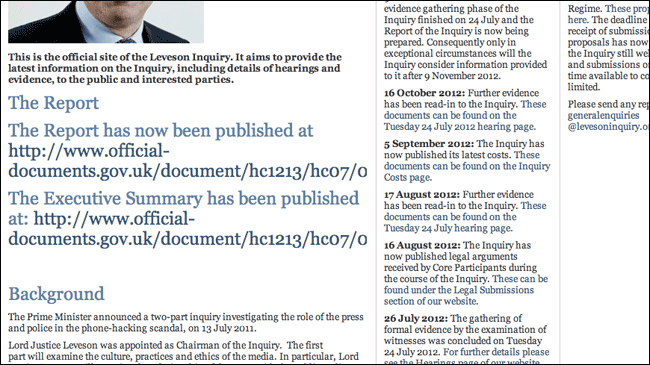 The Leveson Inquiry homepage this afternoon.

And those giant URLs don’t download the report. That would be too easy. Instead they took you to a page with more links, adding an extra click to the user journey.

The report itself comes in four PDF parts and an executive summary. They’ve been published with really helpful user-friendly filenames like 0780_iii.pdf. You know, the kind of name that is easy to remember when you are looking to find it on your computer.

And PDFs are a painful format to use, locking data and words up, and making the document difficult on a lot of small-screen devices where PDF text doesn’t resize and reflow. Given that they’ve spent £3.9m on the inquiry so far, the cost of additionally laying the report out in .epub and/or .mobi so that people could read more easily on a variety of devices seems like it would have been small change.

Much has been made of the scant reference paid to the internet in the report, and the publishing format reflects that. Footnotes in the text reference URLs, and these are at least clickable, but they typically take you to a HTML page that contains links to an entire session’s transcripts, made available as a Word document or another PDF file. These can come in at 45 pages long, so this isn’t exactly what you would call a direct citation. It all feels so 20th century.

Still, As @Asher_Wolf put it:

“Rather relieved the #Leveson report almost completely ignored the Internet. Like ships in the night, old media and the rest of us.”