Editing the Guardian’s “Battle for the Internet” ebook

The Guardian recently published another ebook that I’ve edited for them: “Battle for the Internet: An open democracy or a walled garden?”.

“The internet has the potential to help society build the greatest global democracy with lofty ideals of freedom, and the capacity to facilitate the most authoritarian of surveillance states. One of the defining philosophical clashes of our age will be whether the original open model of the web prevails against a whole stack of challenges lining up against it.” 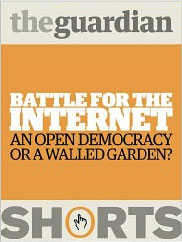 As has quickly become a tradition, here are my DVD extra behind-the-scenes thoughts on the editing process.

The two previous books I’ve edited for the Guardian - “Facebook: The rise and rise of a social media giant” and “Who’s Who? The Resurrection of the Doctor” - both involved delving a few years back into the archive. This book involved editing material that had only been published a few weeks previously. It did feel slightly odd to be working with material that had so recently gone through the authoring and subbing stage, particularly when working with articles from journalists who I quite regularly talk to like Charles Arthur or James Ball. In the end though, it isn’t about “correcting” things, it is about shaping the material so that it makes a coherent longer read - removing repetition across articles, and references to which day an article has been published that make no sense in the ebook context.

There is something quite awkward about editing a passionate piece by Richard Stallmann about the evil of the “malicious features” of Amazon’s Kindle system...to go into a Kindle ebook.

Both he and Jonathan Zittrain contributed articles to the Guardian series under Creative Commons conditions that allowed for the re-use of the articles in the book, but including them did seem a bit at odds with the points they were making.

Some of it annoyed me

There was one bit in particular, when talking about the use of data to target consumers that really irritated me. Jim Adler, in reference to the story of the father who found out about his teenage daughter’s pregnancy through data-driven marketing said:

“‘The Big Data guys who want to send you coupons when you’re pregnant – because they’re nerdy and technologists – probably don't realise that pregnancy is a sensitive issue.’”

What? Nerdy technologists are unable to think “pregnancy is a sensitive issue”. Really? What about the female ones? And next you’ll be saying us boy techno-nerds can never get girlfriends. Patronising much?

I ended up taking out quite a few things that seemed a bit patronising to the reader once transferred to the ebook format. For print, and the possibility that you have reached someone with a casual interest in the topic, then saying that Firefox is an open source web browser from Mozilla is fine. Defining Firefox for someone who has just purchased an ebook specifically about the future of the web is probably unnecessary.

I also scored out some phrases that just grated on the technologist in me, for example a description of UNIX as “a rudimentary text-only system with no user interface.”

Based on some of my sketchy designs and a vague list of desires and requirements, Dan Catt built the Guardian Ebookifier. It is a very simple tool that basically allows you to do some advanced searches across the Guardian content API, pick which articles in the results you’d like to go into a draft of your ebook, and then roll them all up into one big file. You still need a manual editing stage, but by golly does it simplify the compilation of material under consideration. All hail the ebookifier!

I started the process of editing the book in the very same pub that some 15-or-so years previously I started teaching myself HTML4 with the help of a book and some pieces of paper to sketch out tables and grids.

There is nothing more likely to trigger a bout of imposter syndrome than the realisation that you are editing Tim Berners-Lee, Al Weiwei, Cory Doctorow, Clay Shirky, Heather Brooke, Emily Bell, Aleks Krotoski and so on and so on...

Read other recent posts about: Ebooks, The Guardian, Web