Like many people today I was shocked by the awful news of Gary Speed’s death. I watched him play for Leeds United nearly every game of their 1991-92 campaign that saw them win the title.

There are a selection of tributes here.

This lovely piece from Rob Smyth is a couple of years old now, but it reappraises that championship winning Leeds United squad, the last team to win the title before the Premier League began.

Gary Speed was a fantastic player, and a promising manager. What a sad loss. 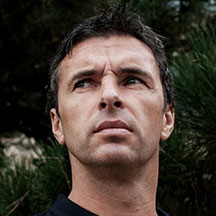