“It is over three hours long, and it is like a cross between Noel Coward and The Terminator” - Ivor Benjamin describing the original version of “R.U.R.”

Last Wednesday I went to see an adaption of Karel Čapek’s play “Rossum’s Universal Robots”, presented at the British Library. 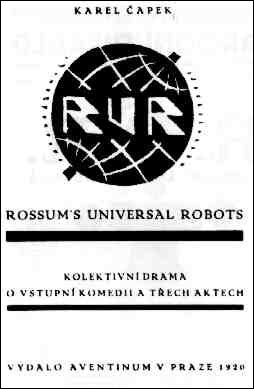 Written in Czechoslovakia in 1920, it is the play that gave the English language the word “robot”, and was the first piece of science fiction ever shown on television. This production was a staged reading, and had been adapted and directed by Ivor Benjamin. It was followed by a Q&A session with the cast and director.

The robots of Čapek’s vision were not clunking metal-men, but more like the synthetic humans we know from Blade Runner. Proto-humans who may momentarily fool you into thinking that they are real people, but who ultimately have no feelings, desire or soul. In “R.U.R.”, the robots, mass-produced and used as cheap labour and army recruits, rise up and overthrow humanity. They then find that their fatal flaw is that they are unable to replicate themselves.

Many of the questions centred around the process of adaptation, and whether Ivor had changed the message by updating the setting from a near-future that belonged in the thirties, to our own near future.

He argued that the original was unproduceable for a modern audience. It is three hours long and, he said, “written in a style that was already old-fashioned by the 1940s”. Benjamin said that Čapek’s main themes - of treating human beings well, the economics of labour, the risks of “playing God”, and of the dangers of revolutionary totalitarianism, were all still valid today.

Some of Čapek’s ideas had transformed from metaphor to literal fact in the ninety-odd years since he wrote the play. Čapek can’t have truly imagined, Benjamin pointed out, that his lines about “knitting and weaving miles of artificial nerves and guts” would become medically possible.

Interestingly, for a play that centres around machines that emulate humans, Ivor Benjamin said that in preparing his version, he had used Google Translate a lot. Most of the previous English translations of Čapek’s work had imposed a theatrical style on the dialogue, which he wanted to strip away. The roughly-hewn machine translation of the original Czech served his purpose perfectly.

In condensing the play, Ivor Benjamin also reset the gender balance in the cast. Originally it only features two bit-part female robots, and a main female character he described as “a terrible flapper who has fallen hopelessly in love by the end of Act One”. He opted to make the chief scientist female.

There was one question from the audience that suggested Benjamin had gone too far in the adaptation. “This [play] is more about philosophy than it is about iPads and mobile phones” the questioner said. They also pointed out that we view it through a filter of the downfall of communism, but that at the time Čapek was writing, the Bolshevik Revolution was only three years old, Lenin was alive, and communism was “a concept that was yet to go bad”.

In updating the play, Benjamin had taken the opportunity to liberally dose it with references to science fiction written after R.U.R. and inspired by Čapek’s ideas. At one point the leader of the robot revolution intoned “I’ll be back”, and lamenting the fate of the human race, another character observed “and we have burned so very, very brightly”. Ivor Benjamin also admitted that there was even an oblique reference to Bob The Builder in the naming of one of the characters.

The evening finished, predictably enough, with Kraftwerk’s “The Robots” being played over the sound system. Given the true nature of Čapek’s creations, perhaps “The Man-Machine” would have been more appropriate. 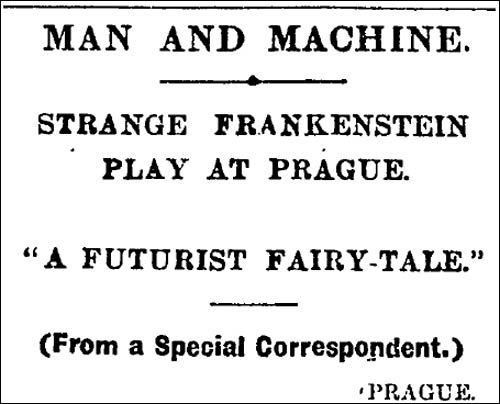 A 1921 review of the play in The Observer