A link to a New York Times piece on the world of SEO has been doing the rounds for the last few days - “The Dirty Little Secrets of Search”. If you've never really delved into the SEO world then it is a decent layman’s introduction.

As I mentioned the other week when talking about accusations that the BBC was accepting cash for links, I think that few people outside of search engine circles really appreciate the extent to which money changes hands for links. You don’t have to be running a blog for very long to start receiving offers to trade links or place guest post content with discrete backlinks contained in it. I’ve also written about the tsunami of comment spam that comes my way because this blog offers “dofollow” links, and my URL is traded on “black hat” forums and sites, sometimes for cash.

Since links carry so much weight in the Google algorithm, and since Google is the de facto entry point to the web of so many people, links on big authoritative domains have a computable monetary value. Jeff Jarvis likes to talk about the power of the “link economy”, but in the SEO world that economy is very much a real one.

And one delicious irony about the New York Time advert that highlights what some would consider to be the stranglehold that Google has on the web. When I viewed it, surrounding David Segal’s piece were two ad slots powered by Google. In one was a house ad for the Google Website Optimizer, in the other was an offer to triple your traffic in 48 hours - using, of course, Google. 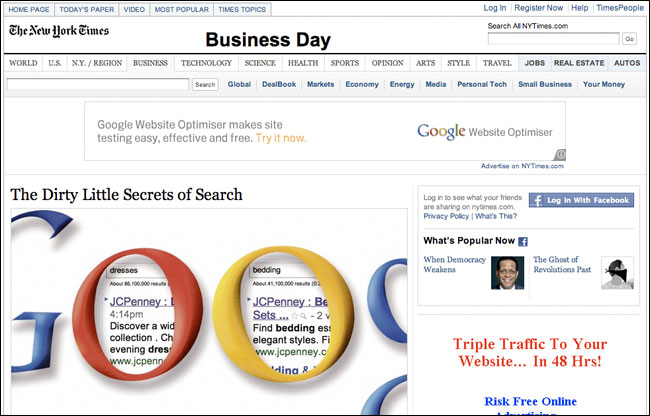