Last week I was at #dendatameet, hosted by Vision+Media in Manchester. Organised by UCLAN and the Digital Editors Network, I was talking about "IA. Data. Journalism. Stuff". On Friday I published my notes from Oscar Westlund's talk. Today, here are my notes from the talks by Julian Tait and from Paul Bradshaw.

Julian Tait is one of the organisers of Future Everything, a festival of arts, music and ideas that grew out of the grassroots digital culture at underground parties. They now run things called 'Future Everything Labs', projects which, for example, get people to mass participate with projects around measuring the environment.

He posed the question "How would our cities evolve differently if we had access to all of our data", and argued that data is the lifeblood of the modern technologised society. He pointed out that schools close, speed-humps appear, parking restrictions are changed, and all of these decisions are informed by data. Yet, at the moment, it is only the town hall that has full visibility of the dataset.

Tait pointed out that data alone isn't enough to effect a change. The poor areas of Victorian industrial cities didn't need a precise measurement of the number of pollutants in the air to know that they lived in an unhealthy part of the city - they had all the data they needed visible all around them. Without the ability to move anywhere else, though, they were powerless to act on the data.

One of the inspirations behind Julian's drive to open data is The Sunlight Foundation. He used their 'transparency cycle' illustration as part of his presentation. 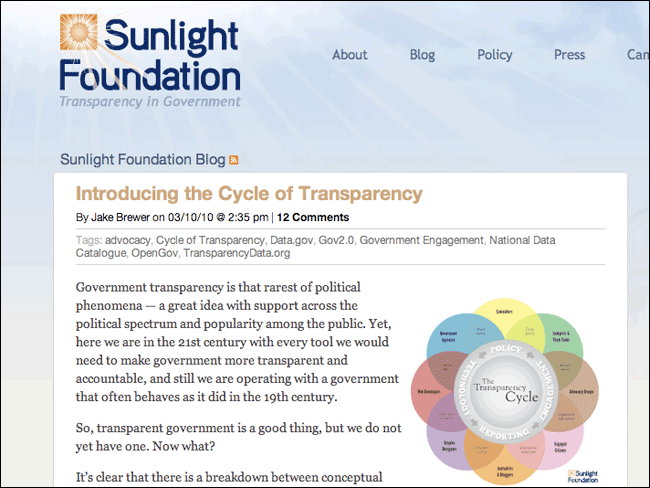 Paul Bradshaw's talk covered a wide range of topics around the ideas of data visualisation and investigative journalism. He was encouraged to see that a good proportion of his students this year were doing projects based around investigations. Paul wasn't sure if it had become more fashionable after the Telegraph MPs Expenses story, or whether it was his own reputation for being behind "Help Me Investigate" which was pushing the students in that direction.

His students have also been involved in making data visualisations. One example was looking at the official capacity of Glastonbury festival compared to the police estimate of how many people attended, and then issuing FOI requests to try and uncover the story behind the way that policing of the festival has changed.

Talking of the Telegraph MPs Expenses investigation, Paul opened with an anecdote about how technology could help the journalist. It was a function of Excel that alerted a journalist to fishy goings on, when they found that an address they were typing in for one MP auto-completed, suggesting that the same address had already been used on someone else's claim.

Bradshaw championed the use of free online tools like Yahoo! Pipes and the Google Chart API, and urged journalists to save their data in the simplest formats possible - CSV files and plain text files - to enable data to be more easily manipulated by developers.

Max Gadney wasn't at #dendatameet, but one of the most re-tweeted bits of my presentation was based on something he said at our London IA evening before Christmas. There, Max had argued that "Information wasn't beautiful" if it was just some numbers plotted in a pretty way without a story to tell. Here is a video clip of him explaining this point:

I'm going to be pretty busy this week at the Future oF Web Design conference in London, but, time permitting, I've got one more #dendatameet blogpost to come, which will be my notes from a fantastic video-link presentation by Olga Pierce and Jeff Larson from Propublica.