I've been watching this year's African Cup of Nations in a weird twilight kind of world. As the games are on during the afternoon and early evening, I've been recording them, and trying to watch them 'as live' late at night. This is taking Bob and Terry's task to new heights, as it is pretty damn hard to avoid the scores when you work in a news organisation that is doing minute-by-minute coverage of the key matches. Nevertheless, at the moments when I have been up-to-date with the scores, I've been looking at the online coverage of the event.

The attack on Togo

I had already planned to write a series of articles about coverage of the African Cup of Nations, but the tragic events surrounding the Togo team before the tournament started ensured it had a much higher news profile than usual. I'm willing to bet it was the first time that the UK's red tops were united in covering an African football tournament on their front pages. 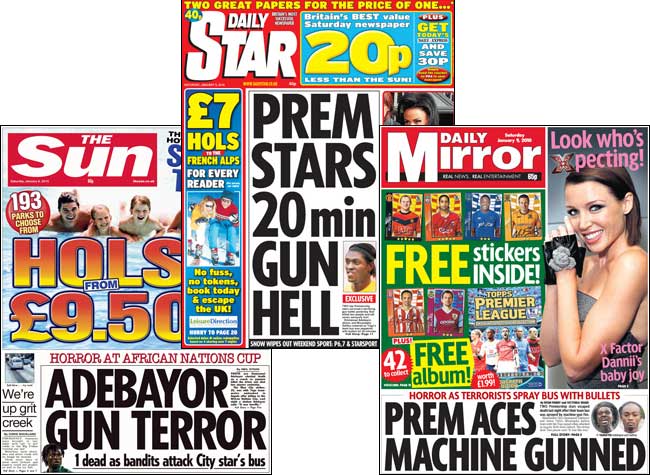 Details of the attack on the Togo team were sketchy at first, and this lead to reports of the death of goalkeeper Kodjovi Obilale. Thankfully these turned out to be unfounded, although you wouldn't have known that from this story on the Yahoo!/Eurosport site. 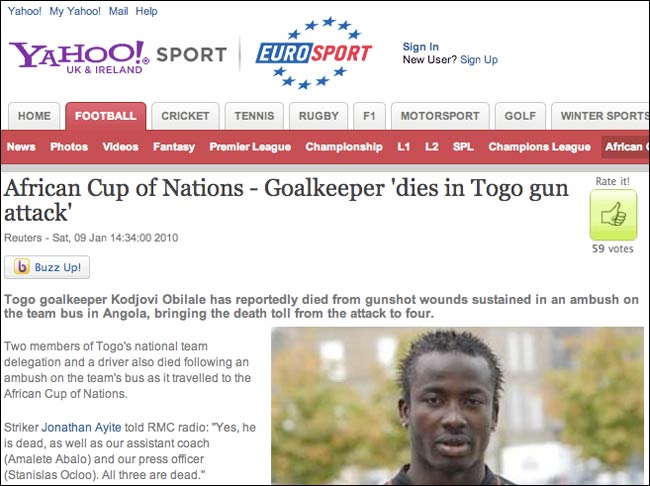 This is another example of where news organisations are still not using the online medium to the full. If you broadcast on TV or radio 'reports say that...' and it turns out not to be true, then the broadcast has already been sent off into the ether and there is little you can do. Online, however, there is no need to let an article like this stand uncorrected once the facts have been established. Wikipedia, of course, did this much more efficiently, by mentioning the reports of his death, and sourcing the statement that said he was still alive.

Wikipedia editors were also very quick off the mark in deleting Togo's fixtures from the match schedule, whilst other news sources were saying their participation was in doubt. 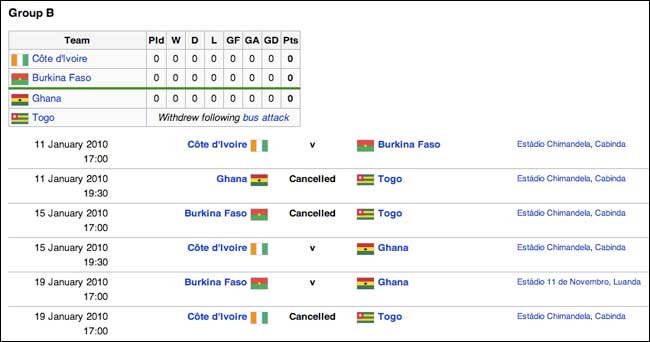 The comment thread on the Eurosport site was pretty unedifying. Firstly, there were those who saw this as further proof that the tournament should have been held at a time that suited Chelsea, Portsmouth and the rest of the English Premier League, rather than at a time when the weather is suitable for football in Africa. Then there were those who showed a deplorable disrespect to the players involved, as if they were somehow military representatives of their country, rather than a bunch of sportsmen travelling to a tournament.

The moderation around the news stories about Togo on the Eurosport site was pretty poor, including a lot of racism, and random interjections promoting various religious beliefs which seemed unrelated to the topic at hand.

Despite the deaths of three members of Togo's party, the competition went ahead, and tomorrow I'll be looking at a range of African Cup of Nations coverage from the online versions of newspapers across the African continent.