Today is the final day to object to a planning application seeking permission to turn Walthamstow's listed art deco cinema into a church. As you may know, the cinema has been closed for some time, and the church owners have allowed it to fall into considerable disrepair. Back in the sixties, the EMD used to have concerts on, including The Beatles, Rolling Stones and The Who. It also has lots of cinematic history, being the cinema where Alfred Hitchcock grew up watching films. The campaign to save it has been backed by the likes of Mick Jagger, Alan Davies and Tony Robinson.

1) The building is of great local cultural significance, and the present owners have shown themselves to be woefully inadequate in protecting and securing the façade of this listed building in a reasonable state.

2) Any use of this building should be for the whole of the community, not just for one religious group

3) I have no objections to people worshipping, but Waltham Forest has plentiful places of worship already, but it only has one listed art deco ex-cinema

4) Other heritage cinemas (for example The Phoenix in East Finchley) have demonstrated that there is a valid business model in running a historic building as a community resource showing off the beaten track movies alongside mainstream features. I see no reason why an owner could not be sought to return this beautiful listed building to its intended function as a cinema.

5) The plans currently proposed show very little difference to those previously submitted in the early 2000s. Since then nothing significant has changed in the description of how the building will be used. These plans were deemed unacceptable then, and should be rejected now." 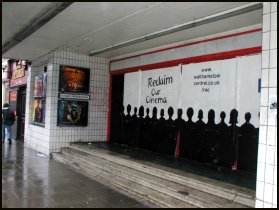