Today the City of London Corporation is celebrating the 40th anniversary of the opening of the Barbican Estate with a party for around 400 residents. As anniversaries go, the timing seems a little bit arbitrary - I've seen articles on the web suggesting the actual anniversary was July 7th or July 8th - but it was certainly in 1969 that people and families first moved into the new tower blocks. They are now a familiar part of the London skyline, but, as with most landmark developments, at the time the concrete towers were not always seen as a popular architectural addition to the city.

Adrienne Keith Cohen, writing in The Guardian, describing a tour of the City as the development progressed said:

"For a taste of reality, carry on to Barbican, the bedevilled scheme to bring domestic life back to the city. You need imagination, a fairly expensive purse, an urge to be in at the beginning of a new project and the sort of taste that runs to small bright pieces of modern furniture to yearn for a flat in this little city within the City." 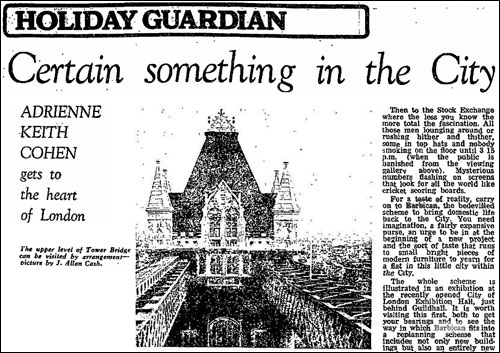 Much of the press coverage at the time seems to have centred on how the Barbican Arts Centre was being developed - when they weren't talking about industrial disputes on the site anyway.

I did find one fan in The Guardian's digital archive though, London diarist Gerard Fay. In 1965, four years before people started occupying the estate, he wrote:

"It was in 1959, after some years of reading about it, and even writing about it, that I came to believe that Barbican would, in the end, be built and that it might be a good place for a Londoner to live. So I wrote to the town clerk at the corporation of the City of London and had an acknowledgement from the housing department. An interim letter a couple of years later confirmed the existence of the applicants' list and that my name was still there.

In the housing department, near Guildhall, is a splendid model of Barbican, truer to the facts than some architectural models though still a bit suppositious in its minor details. Some features have already been withdrawn - for instance a romantic-looking bridge across a lake. But others remain and building of them is in progress. The City has never swerved from its original intention that Barbican should become a genuine residential neighbourhood for people who felt they could afford nonsubsidised rents on a most expensive site." 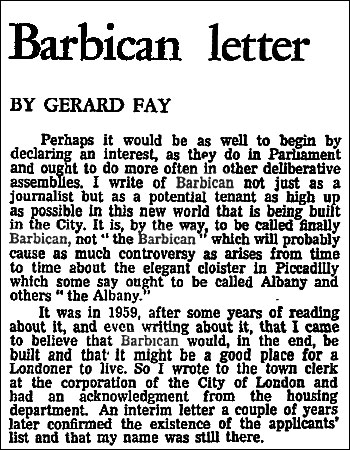 At the time the price of living in Barbican was phenomenally high. Terence Bendixson wrote in The Guardian in December 1969:

"The £45-million Barbican Scheme is unlike any other municipal enterprise in the country. It is a residential neighbourhood being built by a council, the City Corporation, but it is not a collection of council houses. As in a commercial development, rents are designed to cover the cost of the project, which is why they work out at about £12 a week, less rates, for a one-bedroom flat and £1,065 a year for a penthouse 'maisonette' with three bedrooms and two bathrooms."

I don't know if Gerard Fay achieved his ambition of living there. In 1969 the waiting list was already long.

"To live in the Barbican, all you have to do is put your name down and wait until a flat of the size you want becomes available. However, about 2,500 people who have put their names down since October, 1968, when lettings got under way, are ahead of you in the queue, plus hundreds more who registered when the project was only an architect's drawing." 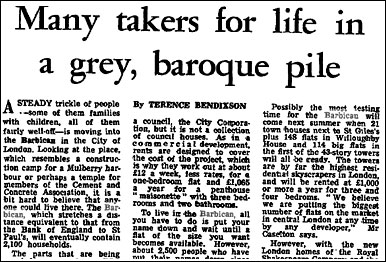 If you want to get a glimpse of what London looks like from the top of a Barbican Tower, then this photo gallery will give you the idea. There is also an interesting overview of the history of the Barbican on the Barbican Living website.