Activate 09 at The Guardian: Notes and take-away quotes - Part 3

Last week I was lucky enough to go to The Guardian's first Activate summit - a one day conference at Kings Place which brought together politicians, economists and technologists to discuss the future shape of the world.

Today I wanted to pick up another thread that ran through the day - data and story-telling. Arianna Huffington described story-telling as "mankind's greatest gift". Personally I reckon fire is probably up there as well, but let's not quibble. She was responding to a question from Conrad Wolfram about data-sets, about whether publishing the full data or publishing editorialised extracts was the best approach.

Now, swivel-eyed neophiles like myself get very excited about data and metadata and automagically drawing something out of it, but that sometimes downplays the significance of traditional story-telling. In fact the talks from the day that have most stayed with me were those that really told a story. I've already blogged about Gerry Jackson's emotion-provoking images of Zimbabwe in crisis, but Clare Lockhart and Sugata Mitra also told stories with lasting impact.

Clare Lockhart on how the UN fails states

Clare Lockhart was talking about attempts to get 'failed' states back on their feet. As she said, nobody can agree on the definition of a 'failed' state, but we can all recognise one when we see it. Her experience had been of Afghanistan. 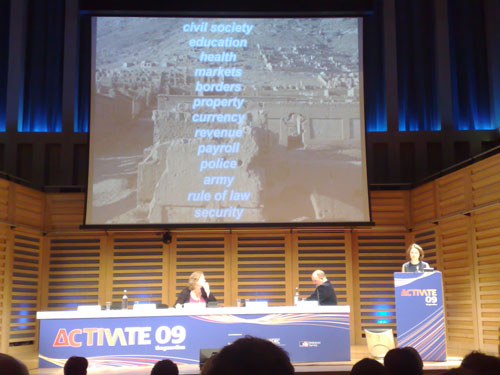 The key, she felt, had been not to rely on top-down traditional solutions imposed by NGOs from the West, but to allow the Afghan people the space to find their own local solutions that played to their strengths and traditions. Thus, instead of an expensive programme to peg a new national currency to the dollar, which was estimated to take three years to come to fruition, the country's competing currencies were unified in four months at a fraction of the cost by giving the task to the informal national network of money-changers.

Clare was very critical of the UN. As a body it has something of a 'sacred cow' status about it in some circles, and so it was refreshing to hear it criticised for waste, inefficiency and for being patronising inside The Guardian building. Clare wasn't afraid to talk about specific UN failures either. When forming a plan to introduce telephony to the nation, the UN's proposal was to conclude an expensive deal with a multi-national that would give 100 phones to key diplomats and give them free phones for life. The team Clare worked with instead got into place a system of national spectrum franchises and regulations which flooded the market with cheap mobile phones for the use of the people.

Sugata Mitra was also talking about the developing world, and specifically about his experiments with putting computers in 'holes-in-the-wall' in villages otherwise untouched by modern communications. He was an engaging speaker who wildly over-ran his timeslot, but nobody in the audience seemed to mind because he had such great video clips of the children using the computers.

You can find clips online of Sugatra presenting at Lift and at La Universitat Oberta de Catalunya which are well worth watching. As Steven Feldman said in one tweet that flittered by during the conference: "If you aren't humbled and inspired by these kids achievements you might as well go home".

Sugatra said he is not for a moment suggesting that children in the developing world should be left to teach themselves. But what he is suggesting is that where the alternative is nothing, they should at the very least be given that chance.

Getting the foundations right

I think what really set Activate apart from other tech conferences for me was the juxtaposition of talks saying "Look at this really cool thing we've done with the latest gizmo, just think how much cooler version 2.0 is gonna be" with talks saying "These people's lives have been transformed by technology we've already dismissed as the bare minimum requirements for modern life".

For example, our society is currently obsessed with legislating around peer-to-peer networking to stop the sharing of data, whilst some of these developing countries were being made more prosperous and efficient by the introduction of voice-to-voice telephony, something we have taken for granted in the West for well over 50 years now.

Tomorrow, in the last of my posts looking at my day at Activate 09, I'm going to round-up some of the other notable quotes and things that caught my eye or made me laugh.