'From programming to funding' - Ofcom's PSB documents as word clouds

If it is good enough for Obama's speech, then it must be good enough for Ofcom. Today the UK's broadcasting regulator published the latest output in their seemingly continuous reviews of Public Service Broadcasting. The headlines in the mainstream media will naturally concentrate on three big issues:

I thought it might be worthwhile producing the obligatory Wordle 'word cloud' of the Ofcom document, to see which words had dominated. Although interesting in itself, I also wanted to see whether there was much of a contrast with the language used in the previous Public Service Broadcasting consultation which took place in 2004 and 2005.

Here then is the word cloud of the document release today: 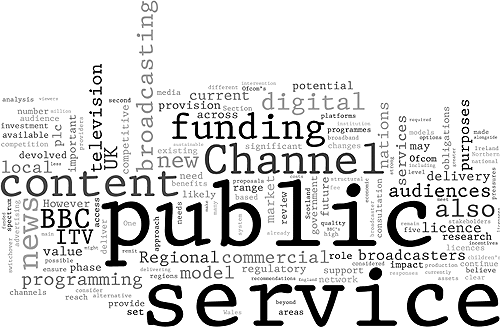 And this is a word cloud made up from the three significant PDF documents released by Ofcom during the course of the 2004-5 PSB review:

Now of course Wordle is just one visualisation tool, but there is one thing that leaps out at me very clearly from those two images.

The 2004 and 2005 documents seem to have been focussed on 'programming', 'programmes' and 'audiences'.

The 2008 document seems to be focussed on funding institutions.

Aside from the obvious contrast in the sizes of the words 'programming' and 'funding', notice how in 2008 'BBC', 'ITV', and the word 'Channel' which crops up in every mention of 'Channel 4', and 'Channel Five' dominate the language.