During the course of this year's World Cup Qualifiers, I've been looking at the FA websites of the countries that England have been playing. With it being an international friendly night, inspired by a comment from 'Uncle Wilco', I thought I'd look at the website of one of the other 'Home Nations'. 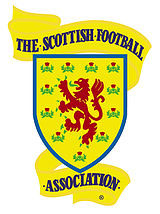 Earlier in the year, when the Scottish FA were consulting with their fans over whether the expense of bringing Argentina to play in Glasgow was worth it, they can't have imagined that they would be at the the centre of the biggest media story in world football today. For tonight, Maradona makes his debut in Scotland as Argentina's coach. With little experience, but a talismatic presence, his reign is sure to be eventful, and it all starts this evening at Hampden Park. 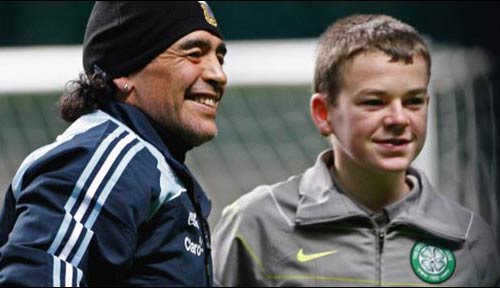 Despite the media hype surrounding the match, today the Scottish FA site was still trying to sell a handful of remaining tickets for the game. 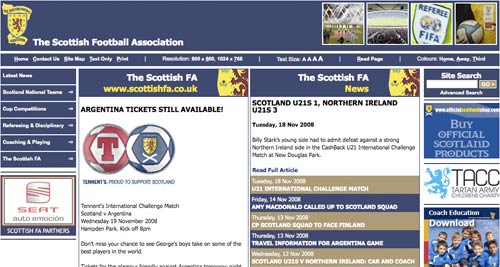 One of the features of the Scottish FA website is that it offers a lot of display customisation. In the toolbar you can change the page's text size, the screen resolution required, and change the stylesheet to represent Scotland's home, away and third kits.

There is an admirable detail of coverage on the site of the Scottish national team at all levels of the game. The left-hand menu elements expand to offer a host of options.

There is also an extensive archive of content covering the tournaments that the team have participated in or attempted to qualify for. 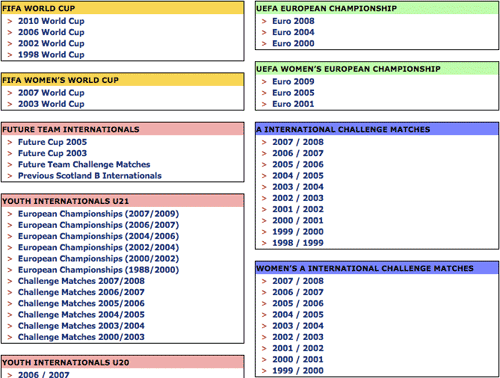 In addition, there is an entirely separate site for members of the Scotland Supporters Club.

I didn't spot a great deal of what I consider to be 'social' or 'Web 2.0' functionality, which is something I've been looking out for in these reviews. Unlike England's opponents tonight, Germany, the Scottish FA website doesn't seem to have any video news content about the squad.

There didn't seem to be any opportunity for users to publish on the site, although, obviously, I wasn't able to access the Supporters Club site, which would seem to be the natural home for that sort of content.

There were no social bookmarking links, and I didn't find an RSS feed of the latest news from the site.

One area where I thought the site was very strong was in the 'Coaching and playing' section. Here there were lots of video clips and downloads for improving the skills of Scottish youngsters, and footballers with disabilities.

In addition the Scottish FA support the 'Football Central' initiative, which encourages the development of football in the nation. This has its own website which promises "free resources for all grassroots associations, leagues and clubs, including websites and tournament and fixture management"

International football takes a break now until February 2009. When those fixtures come around, I'll be looking at the Northern Ireland website, as they prepare to take on one of Europe's weakest sides, San Marino, in a World Cup Qualifier.