I spent a couple of days this week at The Guardian's first ever Hack Day - open to internal staff and some invited guests. It was great fun, and, I think, a real success. 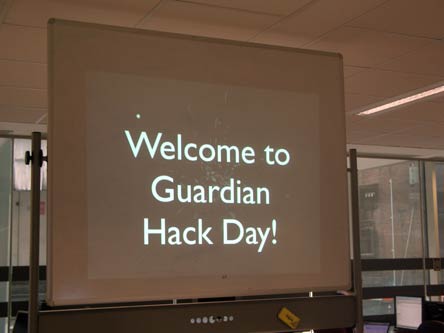 There were a few hacks which I guess people wanted to deploy into production straight away. Nik Silver produced a script that would allow any of the tabular data published on guardian.co.uk to be downloaded as CSV or JSON files. Another hack was to render The Guardian crossword in simple HTML using forms, removing the need for a Java applet and thus making it accessible. 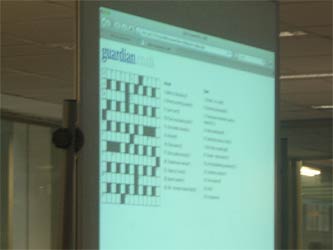 One the biggest laughs was for Charlian.co.uk - Matthew Somerville had re-jigged The Guardian homepage to only show content written by or mentioning Charlie Brooker. 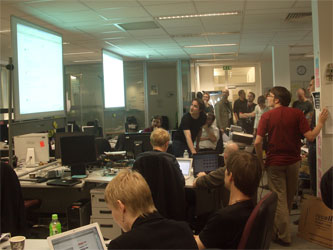 Several hacks focused on visualising data supplied by Simon Rogers - for example a map of where people in the UK were claiming jobseekers allowance. As the map scrolled across the screen the hacker in question announced "So you can see that rural areas are fine, but surprise, surprise, Birmingham is f*&$%d".

Visualising data is fine, but one of the prototypes was concerned with getting people to understand the real value of the big numbers announced by Governments and businesses. "Won't someone please think of the numbers" added a panel to The Guardian website which allowed you to change any monetary sums in the stories into useful comparisons like what % of the salary of Jonathan Ross this represented, or how many tons the sum would weigh in pennies, or how many Wispa bars you could buy with the money.

Rob McKinnon, who produced the New Zealand version of TheyWorkForYou.com, had devised a tool to examine the truthfulness of statements and consistency of line over time. If you hovered over the name of a person, place or concept, a pop-up would let you see things that The Guardian had said about them or it in the previous year. 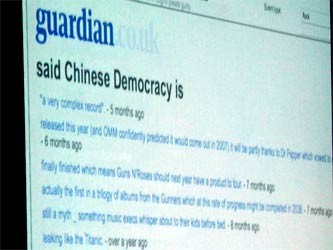 Various degrees of seriousness permeated the hacks. Somebody had written code to count up coins in images, and another person had devised a way to remove all negative stories about Tottenham from the site, leaving them with a happier world view. In the interests of balance they'd also produced the flipside for Arsenal fans - it only showed stories where Tottenham lost. 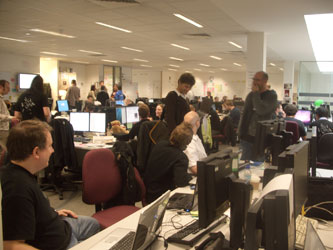 More seriously, one hack inserted the biographies and photographs of Britain's military casualties in Afghanistan into The Guardian's pages on the topic, to remind the reader of the human cost behind the political analysis and statistics. 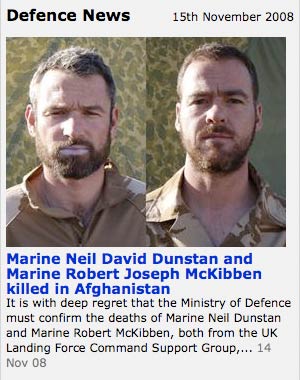 One really good aspect of the day was that people who don't code as their day-to-day jobs also produced some really good work. Members of the QA team produced working prototypes of software that would help them in their day to day jobs, and a team with a 'no code' ethic produced geo-tagged maps of The Guardian's restaurant reviews, mainly to see the percentage of them that were located within a half mile radius of The Guardian's offices.

The winning hack implemented a playful interface onto the 'keyword tags' that appear on each Guardian article online. It is a little documented fact that you can merge the keywords into 'combiner' pages to filter content down to a more specific topic. This isn't terribly obvious to the user, but the winning hack made it possible to drag the links around and visually combine them. 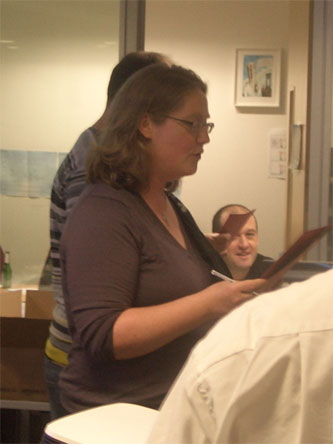 The voting was done via SMS - itself one of the hacks produced during the 24 hours - and the 'tag' hack narrowly pipped a Lego robot which was running Java and controllable via Bluetooth. Another hardware hack used the MySociety API to determine the allegiance of MPs, and then produced an LED bar chart of whether The Guardian's political homepage was favouring coverage of Labour or the Conservatives on that day.

My own hack was a rather meagre effort. I re-badged the Guardian Google Toolbar Button that I made last year with the paper's new online branding, and updated the RSS feed information.

The Guardian  [Add this button to your Google Toolbar] 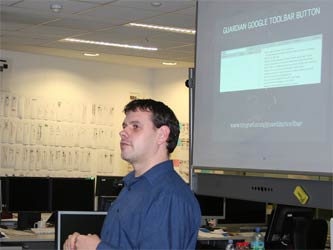 What was more important, I felt, was firstly to shamelessly plug my website during my 90 second presentation, and secondly to get across how the spirit of a 'hack day' can be carried over into general workflow in order to improve the chances of innovation flourishing within a business.

One of the important elements of the success was identified by Tom Armitage - that it didn't feel like a 'hack day at The Guardian', but it felt like 'a Guardian Hack Day'. The hashtag chosen - #ghack1 - reflects the hope that there will be more to follow. Although there was no requirement for hacks to be about the newspaper content and the systems at The Guardian, they nearly all were, and it produced some genuinely useful tools that people will continue to use in the business. 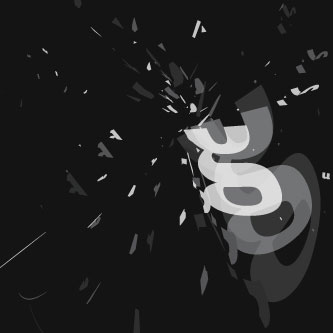 Overall it was a very impressive event - and I was totally knocked back by the quality of the work that had been produced.

Read other recent posts about: Events, Popular, The Guardian, Web