Measuring This Is Plymouth's success with Fark

This week I've been looking at UK newspaper success on social media sites, following a survey I carried out in July and August. So far I've published an e-book covering 12 national titles, and blogged about the successes and failures of Metro, This Is London, and This Is Local London.

I was looking for URLs containing the phrase 'thisis' in the domain name, in order to spot whether any of the UK's local newspaper content became popular on the social media networks I was studying.

This Is Plymouth had four stories reach the front page of Fark during the month I was monitoring for media URLs. This Is Plymouth is the online presence of the Plymouth Herald, and apart from This Is Local London, was the only 'This Is...' site to register a popular URL with the 8 sites I was observing during the study.

The stories featured an expensive seagull rescue, a dyslexic medical student and a burglary where there was concern about the well-being of an owl.

Actually, the latter story also provided some food for thought for the paper's lawyers. Having carefully preserved the anonymity of the victims of the burglary during their story, the paper published a comment from a named individual which stated:

It was unclear whether the paper had done any due diligence to check whether the individual claiming to be the son of the victim and revealing their surname was actually who they said they were.

My favourite story, whether true or not, was the case of the Torquay traffic warden who was issuing tickets using a calculator without appreciating the difference between the decimal system and how we tell the time. 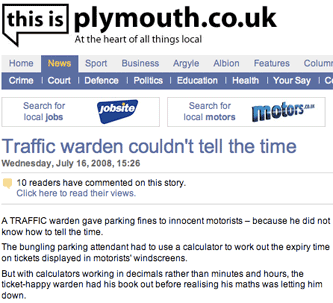 During the period of the study the This Is Plymouth site featured tools for printing, commenting on, and forwarding stories via email. However, it didn't feature any sharing icons or links to social media sites on story pages.

This has subsequently been changed, and now there are links to Delicious, Digg, Facebook, Reddit and StumbleUpon at the foot of articles.

This has been quite a common occurrence during the course of this study. I have concentrated on the links that appeared on a site when I commenced gathering data for this study, but both national and regional titles like This Is Plymouth, The Telegraph and the Daily Express have changed their social bookmarking link selection since July 15th.

Yesterday, when I was talking about the social media success of This Is London, I mentioned an article by Andrew Malone about China. It was a piece that might also have been familiar to online readers of the Daily Mail. Tomorrow I want to look at the impact of duplicate content on social media success for newspapers.