The second round of matches in the group stage of Euro 2008 gets underway tonight, as I continue my review of the FA websites belonging to the nations taking part. On Saturday I looked at the teams in Group A's opening fixture, Switzerland and the Czech Republic. Today I'm looking at the two who make up the rest of the quartet, Portugal, who are playing the Czech Republic in Genève, and Turkey, who face the Swiss in a 'must win' fixture in Basel.

Portugal have made a habit of reaching the semi-finals of tournaments by knocking England out on penalties in the quarter-finals, so I guess they will be one of the few nations sorry that we didn't qualify this time around.

There is no mention of this, however, on the website of their FA - the Federação Portuguesa de Futebol. There is, though, a deceptive amount of information on their site about Euro 2008. I say deceptive, because the homepage is rather corporate looking, and the it is only by clicking a black-and-white promo banner that changes to colour on mouseover that you get to the Euro 2008 goodies.

You can also reach the section by choosing 'Selecções' from the main menu. The Portuguese FA are providing coverage of the whole tournament, with fixture lists and tables for each group.

The site also has details of how Portugal qualified for the tournament, with a slightly odd navigation mechanism. Matches are divided into pairs that are listed in the left-hand navigation. Selecting these links loads a page with an image from one match, alongside the results of the two matches. There didn't seem to be a way to get a broader overview of the campaign than these paired sets of stats. 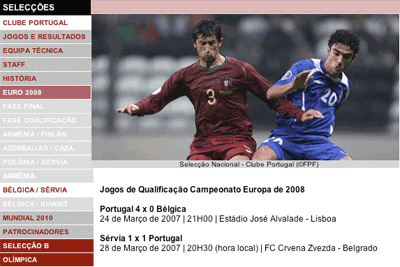 Although the Portuguese site looked like it had good coverage of the finals, it was missing a lot, if not all, of the interactive features I've been looking for. There were no RSS feeds, no user vote, no forums, and I didn't find any audio or video content.

Despite the geographical proximity of my current home to Turkey, of all the teams in this years finals, Turkish is probably the language I am least familiar with - so I was particularly pleased to see that the Türkiye Futbol Federasyonu website was also available in English. Once I'd got beyond the hideous sponsored opening Flash splash page, anyway. 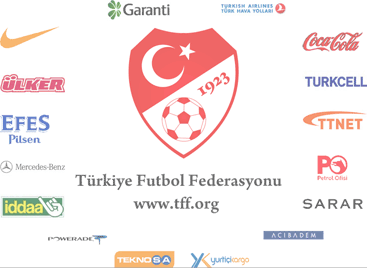 Once you got into the site 'proper', there was a surprisingly in-depth amount of Euro 2008 coverage in both languages. As well as promo banners on the homepage there was a countdown clock and a fixture list for the Turkish contribution to the competition.

The large Euro 2008 section had content beyond just the news of the Turkish team, with profile pages and squad lists for each of the competing countries - here is the page for tonight's opponents Switzerland.

Before the tournament kicked-off there was also a live scoreboard page, awaiting the opening Turkish game against Portugal. I bet they wish it had stayed at 0-0. 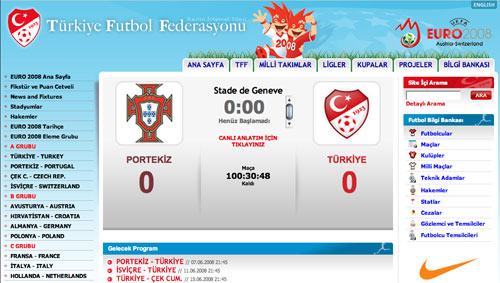 I noticed the Turkish FA badge had been given a little web 2.0 spit'n'polish for that page with a bit of glassy embossing. Other web 2.0 features were lacking though - again I saw no RSS, no forums, no video and no audio, although there was an opportunity for users to vote on the homepage. 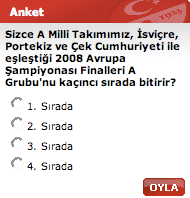 Anyway, let us hope the match passes off peacefully in Basel tonight. It is the first time that the two countries have met since the astonishing end of their World Cup Qualifying Play-Off in Turkey in 2005. Despite losing 4-2, the Swiss edged the Turks out of reaching Germany that night, and a mass brawl ensued. That resulted in Turkey being forced to play many of their home games to qualify for Euro 2008 away from Istanbul.

It has been interesting to note that two of the countries at the geographic extremes of Europe, Portugal and Turkey, have gone to great lengths on their website to provide in-depth coverage of the tournament. I wonder if that is in part because they feel they do not get as much coverage in their own language as they deserve from UEFA. Tomorrow will be quite a contrast, when I look at the websites of two teams in Group B who are very much part of central Europe, Poland and Germany.