Since the Euro2008 draw was made, probably the most keenly anticipated fixture has been tonight's replay of the epic 2006 World Cup Final between France and Italy - but few could have predicted that at the end of tonight there was the certainty that one would be eliminated from the tournament - and the possibility that both could go.

I've been conducting a review of the FA websites belonging to the countries taking part in Euro2008, and today I'm turning my attention to these struggling giants of the world game.

The website of the Fédération Française de Football is, as you'd expect, a content-rich site that seems to have had a lot of investment in it. And, as you'd probably also expect, it is only available in one language. There is an immediate call to interactive action with a vote on the homepage. 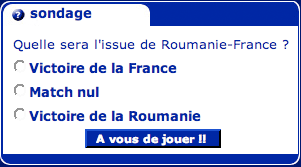 There is also a lot of promotion for the site's considerable amount of video coverage - a lot of which is focussed on the Euro 2008 tournament. 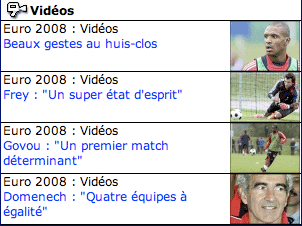 Video content is delivered in a pop-up using Flash 9, but I have to say that even though I had a good connection at the time, I found it impossible to get any of the clips to start playing on my MacBook. 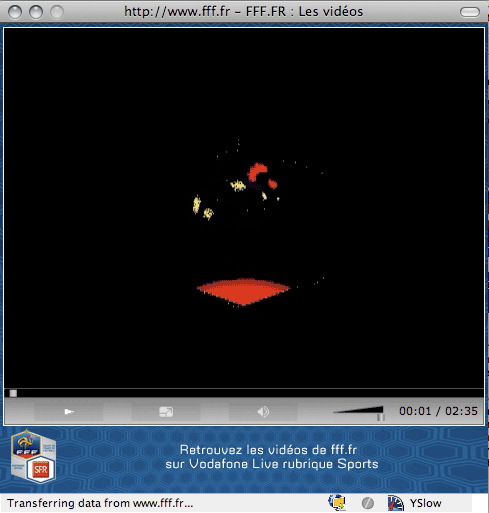 The French FA website has a very thorough section of content for Euro 2008. This included an interactive Flash guide to the tournament schedule and venues. 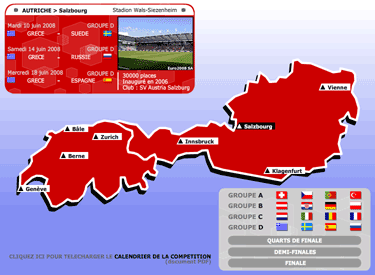 They also provided full coverage of the qualification tournament leading up to this summer's finals, and - not that I'm dwelling on it or anything - here is England's dismal showing again.

In common with the vast majority of sites I've looked at in this survey the French FA do not provide any user forums, nor are there any RSS feeds of the news coverage.

The Italian FA site understandably puts a big visual emphasis on the fact that they are the current World Cup holders, with an animated banner to that effect leading their site, but there is plenty of Euro 2008 coverage as well. The site is a little on the Flash-heavy side for my liking. 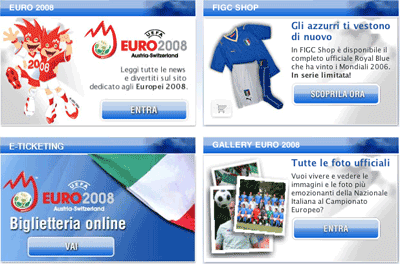 The Federazione Italiana Giuoco Calcio also have an entire Euro2008 sub-site with its own URL at euro2008.figc.it 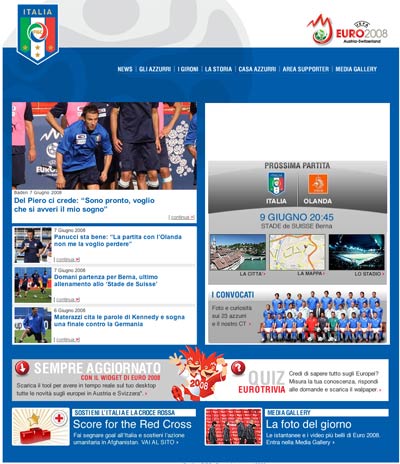 One of the main things that the Euro 2008 sub-site promotes is something I have seen from no other nation competing in the tournament...a widget! It brings the latest news about the tournament and the Italian team to Windows desktops.

How does it do this? Well, they tell you in Italian, and it clearly involves the magic of RSS.

Which makes it a shame that you can't subscribe to the RSS feed on its own without downloading the widget - as it locks Mac users and other RSS reader software out of the content.

Elsewhere on the site there are plenty of things for users to do. There are photo galleries, wallpapers and screensavers to download, for example, and a Eurotrivia quiz to do. 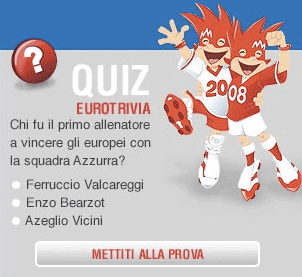 I didn't spot any video content on the site though, or any user forums or votes.

Tomorrow sees the final group games in Euro2008, and I'll be looking at the sites of the 2 finalists that I'm yet to cover - Russia, and defending champions Greece.