"There is a young and impressionable mind out there that is hungry for information. It has latched on to an electronic tube as its main source of nourishment."

No, not the Internet, but television in the 1960s according to Joan Ganz Cooney.

This is one of those blog posts you can probably file under "I've read it so you don't have to", as I've been ploughing my way through the recently published 58 pages of the 'Like Taking Candy From a Baby: How Young Children Interact with Online Environments' report by Warren Buckleitner of the Mediatech Foundation.

It is a really interesting piece of work based on video tapes of 15 children using the Internet in their home environment, with the film being recorded by their parents and siblings. I'm very much interested in how children use the computers and the Internet. This is partly a fascination because I started using them at a young age myself and I'm interested to understand how I would have perceived it, but mostly because I assume this generation of digital natives will eat my job in ten years time if I'm not careful.

From a search point of view, it seems that the Google habit gets started at an early age.

"Children as young as 6 were observed typing search terms into Google. But they clicked on sponsored links as frequently as organic search results, since they tended to contain keywords. Children also proved adept at using drop-down search histories."

One disadvantage from a parent's point of view is that the inclusion of a search box in the top right-hand corner of most browser windows these days provides kids an instant way out of whatever walled garden you have tried to sit them down in front of.

Perhaps the best thing about the Mediatech report is that they have published video clips from the study on YouTube - here is a six year old using Google and another clip of him using Google, trying to find the website for M&M's. [Embedding the videos is unfortunately disabled] 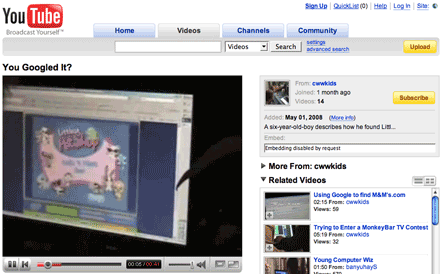 Even as some things show the children to be adept Internet users, other things showed their naivety and vulnerability to malware and identity theft. Children were observed downloading programs after clicking on pop-ups and adverts, and one child was seen using his mother's email address to try and register to get a prize. Additionally children:

"can't conceptualize how pictures get to the screen - whether they come from a computer hard drive, or are streamed from a server thousands of miles away. All they care about are the images on the screen and the sounds coming from the speakers."

Mind you, I've met plenty of plenty of television people like that who worked in new media, so that may not be a unique property of childhood.

Actually, quite a lot of the findings hold true for adults as well as children. There was a distinct preference for sites that loaded quickly and were error and glitch free. Both children and adults got easily lost in the realm of 'portals' that gathered together a diverse range of content from different related sources:

"Some, like Club Penguin or Webkinz, are clearly defined by requiring children to log in or out, and use one URL. But others, such as NickJr.com, Bratz.com, NOGGIN, EverythingGirl.com or PBS KIDS are umbrella URLs for clusters of related sites that may link to one another, either through ads or through menus. As a result, parents and children can easily get lost, making it harder to identify the publisher of the site, or whether an ad is really a menu."

The study specifically points out that it doesn't take into account the exposure the subjects had to any other type of media like television viewing, or use of video games or mobile phones. One problem I did have with it was that it sometimes seemed to imply that expecting content creation for children on the web to ever be revenue-generating was somehow morally repugnant:

"This study demonstrates that children's online publishers are experimenting with revenue-generating practices that go beyond simple banner advertising. In many cases, we found Internet content for children has become part of a strategic multimedia branding strategy, designed to familiarize children with new toys, movies or multimedia promotions."

What is interesting is that companies have begun to use the web in this way because they've found that banner advertising certainly doesn't work with children:

"The younger the children, the less able they are to explain what an advertisement is, or what it does when you click on it. But if an advertisement appears in a consistent place on the screen, they soon learn they shouldn't click on it because it takes them away from their current game."

Not all parents seem to care particularly about the commercialisation aspects:

"Concerns raised by groups like the Campaign for a Commercial-Free Childhood over Webkinz advertising practices were not shared by the families in this study. 15 Parents were more interested in getting the games to work and ensuring they were free of violence or junk food ads."

During the course of the study, one mother said "Before you start criticizing Webkinz, don't forget how many thousands of dollars people spent on Beanie Babies before the Internet even existed.", and another pointed out that "For just $12 (the price of one Webkinz), my daughter can play with her cousin across the country for an entire year. Now, that's a pretty good deal."

There are, though, some serious allegations about advertising in some of the reports used as source material for this document. The UK's National Consumer Council report "Fair Game? Assessing Commercial Activity on Children's Favourite Websites and Online Environments" is cited as saying that there was

"troubling trend that ads are integrated into content, or are not labeled as ads at all."

That is against the recommended good practice guidelines of the IAB in the UK, which states that all advertising should be clearly labelled as such. The Buckleitner report points out, however, that 'children are more likely to understand the word "ad" rather than "advertisement"' which is the preferred term of the industry.

Kids soon recognise the commercial realities of the situation though:

"Starting at about age 5, children begin to realize online games get better when their parents pay, but they don't yet understand how the process works, or the cost. One 6 year old explained to her mother that 'you have to put money in an envelope and send it to the people who made Club Penguin.'"

The report has some recommendations for site publishers and parents, most of which appear to just be good Internet common sense for everybody, whatever age they are.

Parents are urged to check browser histories to see where their children (and possibly spouses) have visited. Of course, it is only an effective technique until the child learns how to hide their tracks on a computer, but it should be effective during their younger years. The report also suggests parents consider switching from using Internet Explorer to using Firefox as a security tactic - although maybe not in Vietnam.

For publishers, the report suggests that there should be full ownership disclosure and site policies should be easy to find and read. This is advice that could be applied to any site, not just one aimed at children:

"It's hard to imagine buying a children's book without being able to find out who's the publisher, author or illustrator. Yet many children's Web sites bury this information or don't list it. Sites should clearly disclose identity.

Privacy policies, terms of use and other important information should be clearly written and shown in full. Policies that ask users to read 3,500 word documents in a tiny font, four lines at a time, are designed not to be read. Virtual real estate is cheap. Skip scrolling policies and display them in full. Hire freelance writers to translate legalese into language a 21-year-old with a high-school education or less can understand."

There is some really good stuff in the report, and, as I said, I think by far the best thing is that not only have they transcribed what thay call 'vignettes' from the source material, they've been able to upload some of them to YouTube. 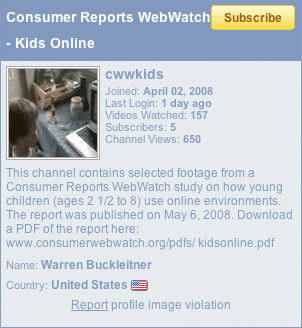 The full report can be downloaded at the Consumer Reports Webwatch site, and you can find the video clips collected on their YouTube channel.

Read other recent posts about: Children and Teenagers, Web