I've been doing a series of posts looking at the online information available about the host cities at Euro 2008, which kicks off in just over a week's time. So far I've covered Salzburg and Klagenfurt in Austria.

Today it is the turn of Innsbruck, where Spain, Sweden and Russia will be playing matches as part of Group D.

The official Innsbruck city site has content about the tournament in English and German. There is also a site dedicated to Innsbruck-Tirol, as it is officially designated, being a host city. 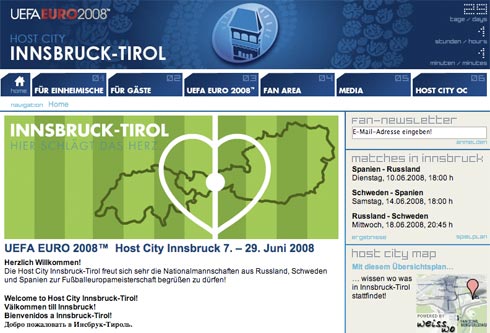 One of their main features is that Hansi Müller is the ambassador for the city. Although he is German, he played for some years in Austria.

There is also a German language Euro 2008 blog on the site, although it appears to be being updated relatively infrequently.

The local transport authority have also got in on the Euro 2008 website act, with a special section of their site for fans visiting and travelling in the area. In common with the rest of Austria, possession of a match-ticket entitles the holder to free travel for 36 hours on urban public transport in the host city. 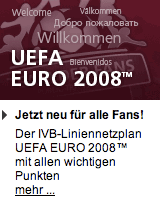 The copy writer on the IVB site has gone a bit overboard with the footie puns though:

"The countdown to the European football championships has begun and we are already hard at work with the warm-up rounds. As 'municipal carrier' for the fans our goal for the many thousands of fans of the 'round ball' is clear: We are to transport the fans! To do this we have worked out the following 'games tactics' for all visitors, fans and above all for all the people of Innsbruck: We are consolidating or entire line network - busses, tram, Nightliner, The Sightseer and ASTI – on a large scale!"

As well as maps of the network there is also a "Team der Fans" movie on the site.

For those fans trying to get to see the championship as economically as possible, the Innsruck and Tirol region has a 'fan camp' with low cost shared hostel accommodation and camping pitches. This also has its own site. 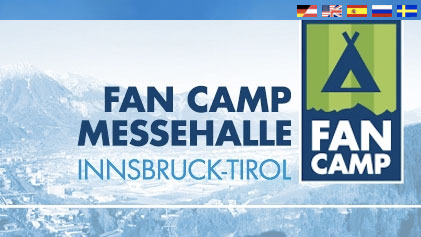 Those fans who visit the city, but who can't get to the game, or who want to watch other Euro 2008 matches can do so in style at one of Innsbruck's Alpine sport venues. The Bergisel Arena, one of the world's most famous ski-jump resorts, will be able to hold 15,000 fans, and has spectacular views across the city of Innsbruck.

If that wasn't enough Euro 2008 web action for one city, it transpires that the Tirol as a region also have their own site dedicated to the tournament. 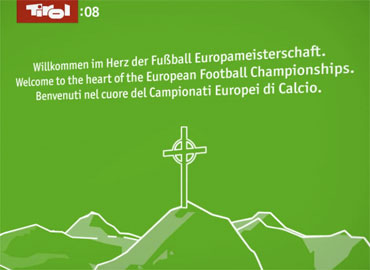 This is rather more like tourist 'brochureware', complete with opening Flash-splash before you get to the actual content. 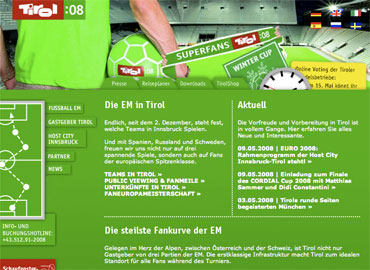 There is quite a bit of video content on the site, but sadly, you can't embed the videos in your own site, which I would have otherwise done. This is yet another example of someone failing to follow the blackbeltjones mantra of not just being on the web, but being part of the web. Here is a still image from one of the videos extolling the virtues of the unspoilt countryside in Tirol. 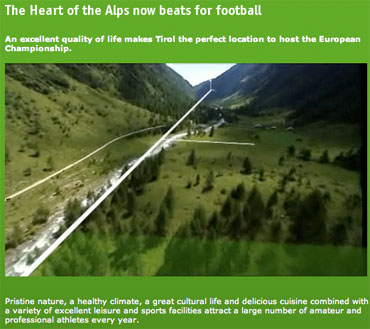 And of course, aside from all that, there is the official coverage of the city from the UEFA site as well. Altogether, if you are heading for Innsbruck, there is plenty of information online, and you are rather spoilt for choice as to where to go to find it. 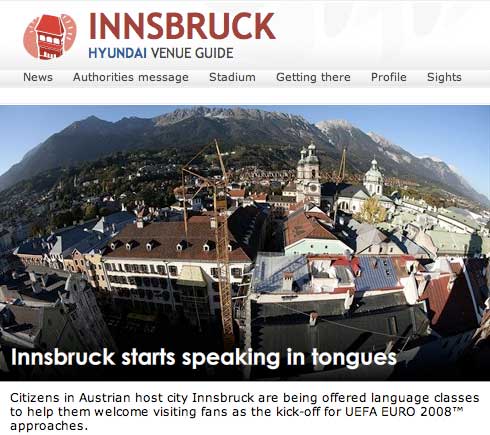 Tomorrow I'll be looking at the fourth and final venue in Austria - the capital city Vienna. This will be hosting Austria's group games, as well as the final of the tournament, and I'll be trying to do the whole review of their web information without mentioning Midge Ure or Joe Dolce once.