The IA Summit started here in Miami in earnest on Saturday morning, and I'm due to give my presentation today. As I did with the Euro IA Summit in Barcelona last year, I thought I would put together a summary of my take-away facts, quotes and top tips, on a day-by-day basis.

Journey to the Center of Design - Jared Spool

Jared was very entertaining and energetic as a keynote. His premise was that User-Centred Design was the stone in the stone soup of getting good design out of the door. After describing the way that changing technology from IBM forced people to design software for untrained office workers instead of trained engineers, he explained some research that showed why some companies consistently produce great designs. 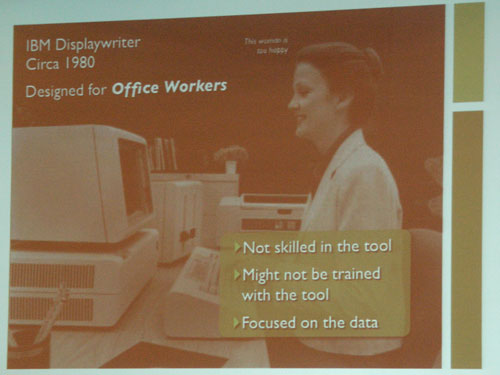 "We don't want the terrorists to have yoghurt. Cream cheese is fine."

His research had found that very often, teams that failed to produce consistently awesome designs were struggling to implement a fixed methodology. He had a couple of interactive bits of his presentation - one involving a 67 foot long rope which represented the total number of users of one retail site. He used it to indicate that just 3 inches of the rope drove 80% of the company's revenue, yet UCD tries to address all 67 foot with one solution. 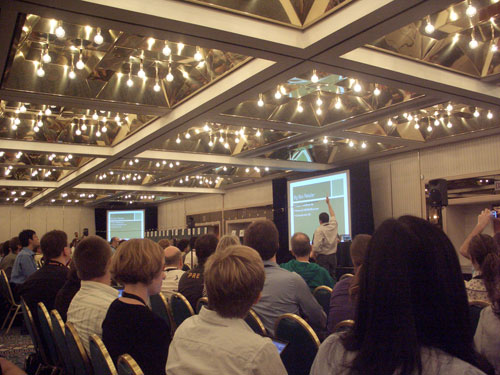 Jared argued that you didn't need to believe in the power of the stone, to convince others in the organisation around you to help and make stone soup.

My slight reservations were, of course, that not every business can be Apple, and not every design has to be the-best-that-ever-there-was. If your whole business culture isn't immersed in design, it is all too easy to slip back into engineers designing for engineers. Telling everybody that UCD methodologies are not worthwhile doesn't help the lone struggling single IA or UX designer in a big business.

Hallie opened with the CSI:Miami theme, and in the course of her talk admitted that:

"Oddly, I never remember numbers. As an analytics professional, I should probably get better at that."

She gave an overview of why she felt that getting an Information Architect involved in the interpretation of web analytics data could be useful to a business. She was very keen to stress that analytics should only be used to gather meaningful 'trend data', and that it should be used to indentify areas that needed further research and exploration in a more traditional Information Architect fashion.

A management fable: The little UX that went a long way - Dan Willis

And one day, Dan Willis turned up at the IA Summit and told his wonderful fairy tale about the little UX that had to deal with a dictatorial princess, and the witches and wizards who were trying to make her a 'pretty thing' with bouncing bells and wonderful whistles. 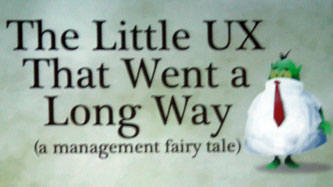 The presentation was beautifully illustrated, plus co-opted Dan's daughter into it as a fairy tale taskmaster, which drew oohs and aahs from the crowd. But:

"the mighty wizards were having trouble conjuring up the right spells"

The point Dan was making was about the repetitive insistence User Experience practitioners need in order to ensure that the end user is factored into the picture at all stages of a project, even when the little UX has no ownership over the project or project process. All the time the UX-er has to be the voice of the customer, because:

"You may not be the only voice calling for better definition, but you frequently will be the first"

Two other quotes from Dan stood out:

" Acceptance is not buy-in "

" There is constantly a credibility issue with UX "

Well, three quotes actually. In his opening he explained how fairy tales often represented a way to talk about difficult topics in a comfortable way...

"As far as I can tell...I mean, Wikipedia is a reliable source, right?"

How to be a user experience team of one - Leah Buley

Leah from Adaptive Path set out a great set of tricks and tips and techniques for doing good UX design and idea generation when you are a team of one. Her point was that, especially in small businesses, without other UX practitioners around, it is easy to lose a bit of confidence, and constantly worry that what you have come up with is not 'the one optimal solution' to any given problem.

The ideas presented included using templates to help guide 'non-UX people' join you in 'UX workshops', and using spectrums to guide early attempts at idea generation for a project. And she was keen to see people use pizza as a design tool. Inviting people to lunch was her way of doing informal workshops:

"It encourages a certain playful input from people - you won't get the same ideas at a 9:15am formal meeting"

She emphasized the importance of articulating for yourself design principles on each project, that you can generate from a mix of business need and user need. And, perhaps most importantly, judging by the stampede to pick them up which obliterated the chance of a Q&A after the session, she gave out free badges, and you can't argue with that 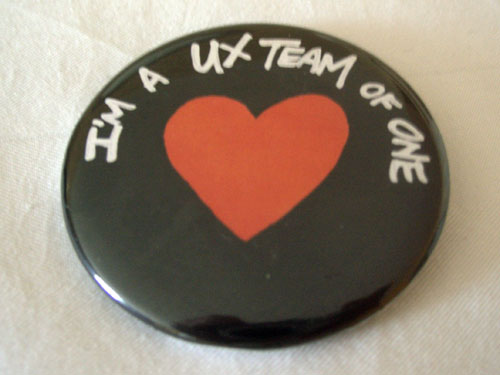 When going out for dinner on the night I arrived, there was some discussion about a collective noun for Information Architects. A 'taggle' of IAs was suggested. I kind of liked it. 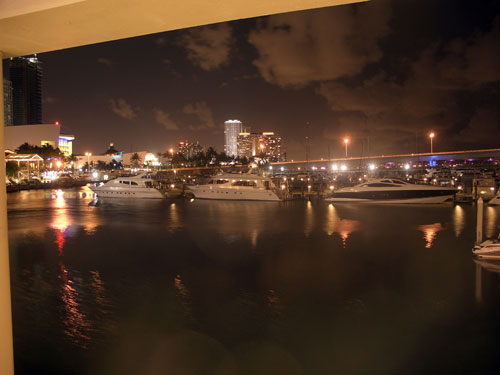