I've been running a series of Newspaper Site Search Engine Smackdowns to see which papers were able to index their own content faster than Google could. It turned out that the answer was not many, with only The Daily Express, Daily Mail and The Independent getting close to indexing news stories faster than Google's web search did.

Although it is the dominant player in the market, Google is not the only search engine, so I also carried out the same test using Yahoo!, Ask and MSN Live Search. There was a detailed breakdown of how Google and Google News performed in yesterday's smackdown.

I took the top ten headlines from eight online newspapers on Saturday April 5th at around 9am UK time. I then searched for the exact wording of that headline on Google, Yahoo!, Ask and MSN Live Search. Search engines scored if they returned the correct story in the first page of results. We saw yesterday that Google performed impressively, with 75 of the 80 stories being returned amongst the top ten web search results within a couple of hours of the stories being published. How would the other engines fare?

There was a mixed bag of results from Yahoo!. For some newspapers, the search engine performed reasonably well, indexing 6 of the stories from the Daily Mail and Daily Mirror that I was looking for, and returning them directly on the first page of results. However, this was not uniform. For some papers, the Daily Express and The Times for example, Yahoo! didn't appear to have indexed any of the major stories from that day. In all, Yahoo! returned 20 of the stories - or one quarter of the sample size.

I found that when MSN Live Search did return stories from the newspapers, they were not in the main run of search results from their web index. Instead they were included as part of a 'news' feature at the top of the page. Microsoft are obviously still testing this feature, as the module also included a question asking whether I had found the results 'helpful'. 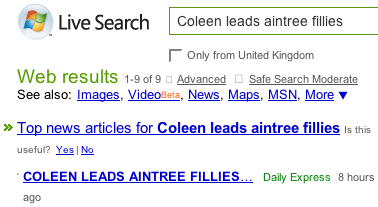 Rather like Yahoo!, the results were a mixed bag. All 10 stories from The Guardian appeared, for example, but there was nothing from The Mirror or The Sun. In total, MSN Live Search returned 26 of the stories on the first page of their results. This was slightly better than Yahoo! had fared, but still barely a third of the stories that Google had managed to process.

I've had some quite positive things to say in the past about the changes that Ask have made to their user interface, but the search engine performed dismally on this test. It failed to return a single one of the 80 stories that I was looking for. Not only that, but the results it did return were often wildly off-topic and consisting of very low quality sites. I was quite astonished at how poorly it performed - it wasn't so much 'Ask' as 'Guess'. 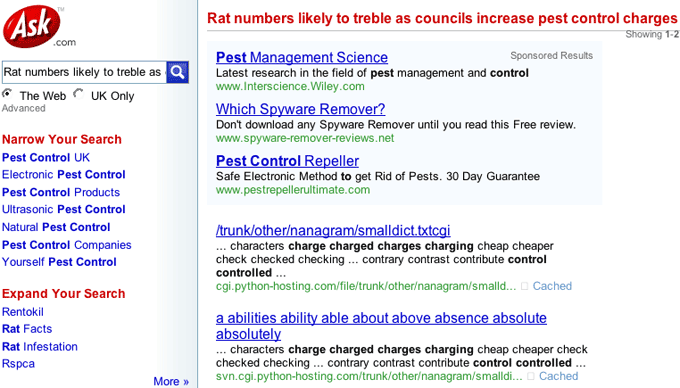 The figures across the whole set of tests speak for themselves. In terms of looking for the latest news stories from newspapers, Google's web search results vastly outperformed newspaper search engines, Google's own News service, and the other major search engines in the market place.

During the early inter-newspaper rounds, The Independent, Daily Express and the Daily Mail took the honours. However, once Google was added into the mix, the search giant proved it was truly king of the "Newspaper Site Search Smackdown".