Another approach that adds more value and entertainment to widgets is including 'Easter Eggs' - hidden bits of content or functionality triggered by specific user actions. The recent marketing campaign for U2's U23D concert movie was a great example of this. Users could download a widget which carried clips of the movie, behind-the-scenes footage, and news about the film leading up to its release. 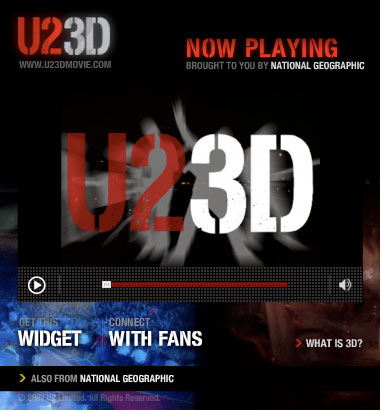 However, it was strategically leaked out via fan message boards and blogs that there was some hidden content locked in the widget. If a user held their mouse over a certain bit of the widget for a length of time, it triggered some exclusive video of an Adam Clayton interview. It was a great way of re-engaging the user and getting them to come back to a widget they may have downloaded and installed a couple of weeks previously.

When we are trying to make compelling widgets, it can also pay off to engage with the widget offline as well. Another musical example of good widget practice comes from a Welsh band called Super Furry Animals. They have a penchant for dressing up as yetis during their concerts. 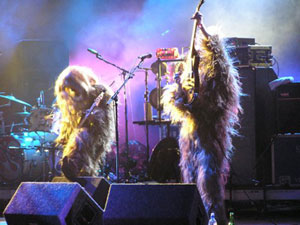 They have recently been touring the USA, and as part of the build-up to the tour, they have been letting fans vote for the songs they most want to hear, via a widget. Users could embed the Flash voting widget on their own site, and then visitors could pick a date from the tour, and then vote for the song they hope to hear that night. It was a great piece of interaction. Firstly, it allowed fans to be involved in shaping the gigs they were going to. Secondly, it acted as a way to get people to promote the tour, and ticket sales, on their own web spaces, potentially giving the band access to a greater audience than they would have previously had.

So, to recap. Widgets may not turn out to be the ultimate future of information delivery on the web. However, it looks likely that as a generation brought up on adding widgets to their social networking spaces grows up, they'll increasingly expect grown-up widgets.

That in turn means it is likely that alongside any web development project, Information Architects will be asked to look at how content can be 'widgetised'. That is good news, because there's probably no other group of professionals who know better than us about how content can be 'chunked' and experienced out of context and in isolation, yet still make sense to the user.

As Information Architects, it is our job to make sure that businesses understand why information needs to be fine-tuned for the specific audience and delivery mechanism of a widget. And we need to make sure that our colleagues in sales, marketing and the technical teams understand that adding and installing a widget is a deeply personal choice by the user, reflecting a specific information need. Widgets need to respect that, and deliver the content that users want and expect.