A month of Twittering

I never really had much interest in Twitter when it first launched. Despite it being almost exactly tailored to a compulsive blogger and early technology adopter like me, I really, really couldn't see the point of it.

As the service has developed, people have begun to find more and more ways of using it to do research, market their blogs, get questions answered, get engaged, and to arrange when to meet down the pub. Increasingly I've been reading about what an important tool it has become for the SEO community, and I've bookmarked several pages that mention it.

However, I still avoided it. My aversion to the flippant micro-blogging tendency of the service was eroded as I began to enjoy the status updates my friends were posting to Facebook, but I still didn't sign-up.

This was because I felt that for Twitter to have any real value, you needed to be in a location where a lot of the people you followed were also around, and to have a regular internet connection. The former allowed for serendipity as you found out that people nearby were doing similar stuff, and the latter was essential to make sure you didn't get swamped with people asking you what you were going to be doing last night when you managed to log on.

In Crete, frankly I have neither, and so no incentive to take part - plus the mobile phone components of the service would be prohibitively expensive on the phones that I use in Greece.

However, I'm now going to be in London for a month or so, and nearly everywhere I'm staying will have some sort of access to broadband internet, and it doesn't cost me money to receive an SMS message. So I thought I'd try a month of Twittering, and see how I got on. 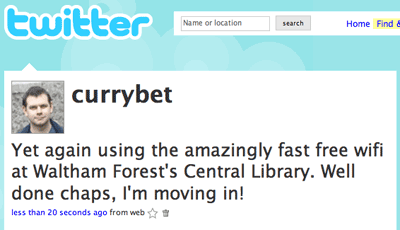